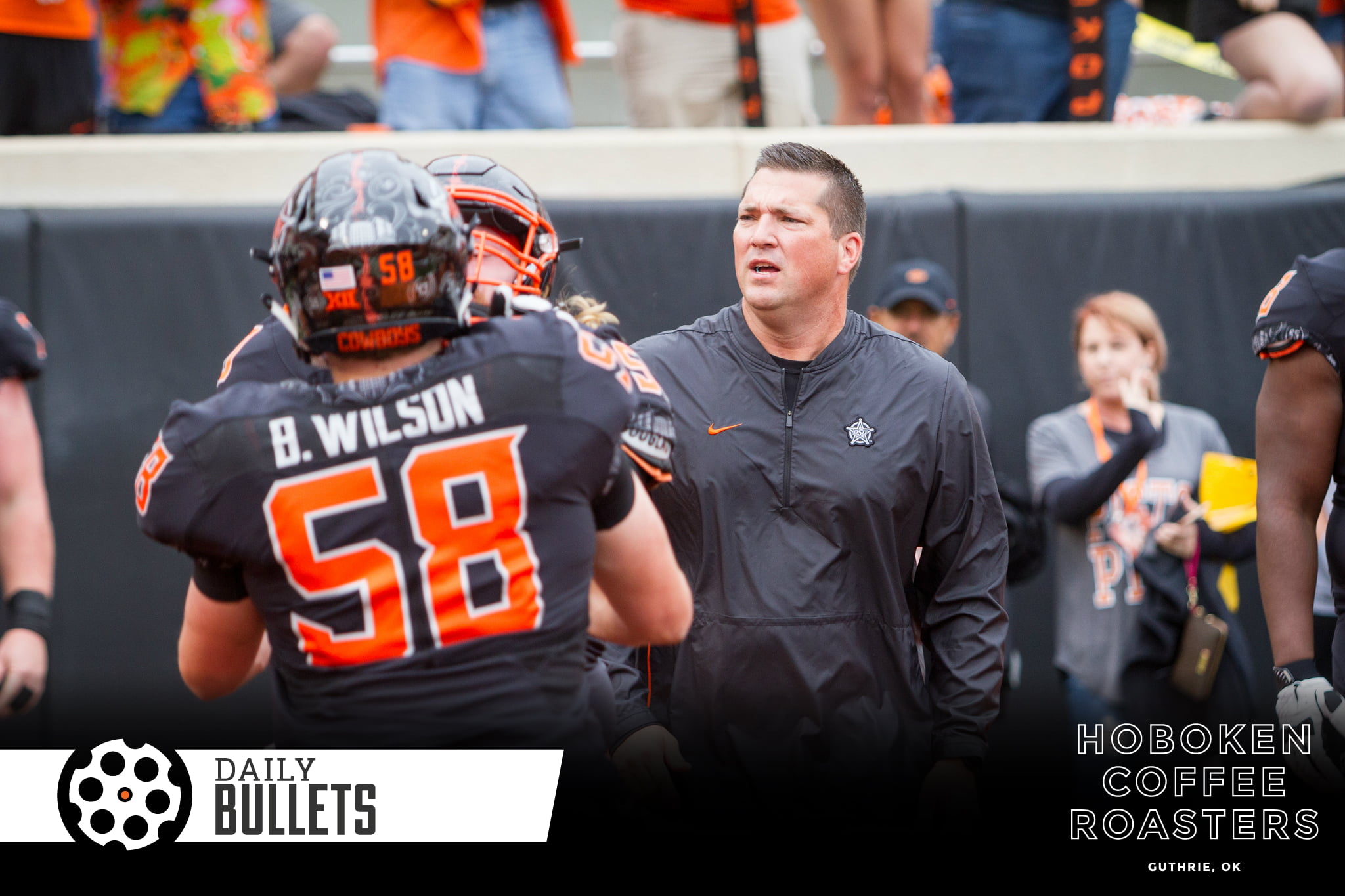 I liked this coaching quote – does the SI piece count as a warranted investigation?

• Henson Out, Dickey In
• Gundy dances on camera
• Where OSU recruits football players

No matter how much you love your alma mater, a roughly 20 percent raise is hard for anybody to turn down. Henson will sign plenty of guys in College Station and get paid handsomely for it. I’m not sure he’s any closer to an offensive coordinator job by doing so but he’s maximizing his earning potential in the process. This would have felt more devastating if not for…

Given the quick nature of the turnaround (less than 24 hours), you get the sense that Gundy anticipated the Henson departure and knew exactly who he wanted. When noting in his announcement that he had tried to hire Dickey before, it increased the desirability of the hire. This sentiment is supported by Dickey’s sustained success in a comparable position and the rational logic that it should translate to Stillwater.

Bonus thought: over/under four former Bill Snyder staffers that Gundy will end up having on staff before it’s said and done?

• Most Viewed (No. 3): Gundy Managed to Upgrade Staff with Turmoil

Boone’s angle here was a smart one – it’s an assumption that when coaches leave (outside of Bob Connelly going to USC), that the prior team loses. But the fact that you could make an argument provided a rational sense of optimism. My take leading to a similar conclusion is that you provided similar levels of expertise from the o-line coach but the offense continues to evolve with the hiring of Sean Gleeson. In conference play, so much of what you do and how you like to do it becomes a predictable, known commodity. Bringing in a fresh perspective and ideas could be argued as an improvement.

• Most Viewed (No. 4): Four-Star Running Back, Son of Pro-Bowler Offered by Pokes

The son of Sam Adams – not the brewer but the d-lineman that consumed all the blockers in front of Ray Lewis in Baltimore – being a prolific running back wouldn’t have been on my list of guesses for what he’d be good at. Barry Sanders’ kid played running back, Mike Gundy’s son plays QB and Kenyatta Wright’s son at least would have played in the front seven of a defense with his old man.

• Most Viewed (No. 5): Video of Gundy Doing the Gundy with Radio Hosts

The capability for Gundy to move his feet completely perpendicular to the way they normally function is insane to me. #FreePublicity strikes again and now game film is out on what the full version of “The Gundy” looks like.

• Great piece by a PFB reader breaking down the data and looking at where Cowboy Football recruits have been located over the Gundy tenure.

(R)ecruiting efforts could certainly be improved, and there is one glaringly relevant takeaway to the future of Oklahoma State football: the array of locations from which players come is good enough in that there are plenty of sufficiently talented players in those places. The challenge is recruiting better players from those locations. [Matthew Hafner]

That’s what’s fascinating to me and makes the most sense – Gundy has pulled from the same areas, he’s just pulled (relatively) less talented players. East Texas and Houston didn’t get any further but the competition for them has gotten more intense with the SEC entering Texas.

• It’s insane how these sports reference sites have grown

• A famous WW II carrier was found three miles down

• When there’s time for happiness