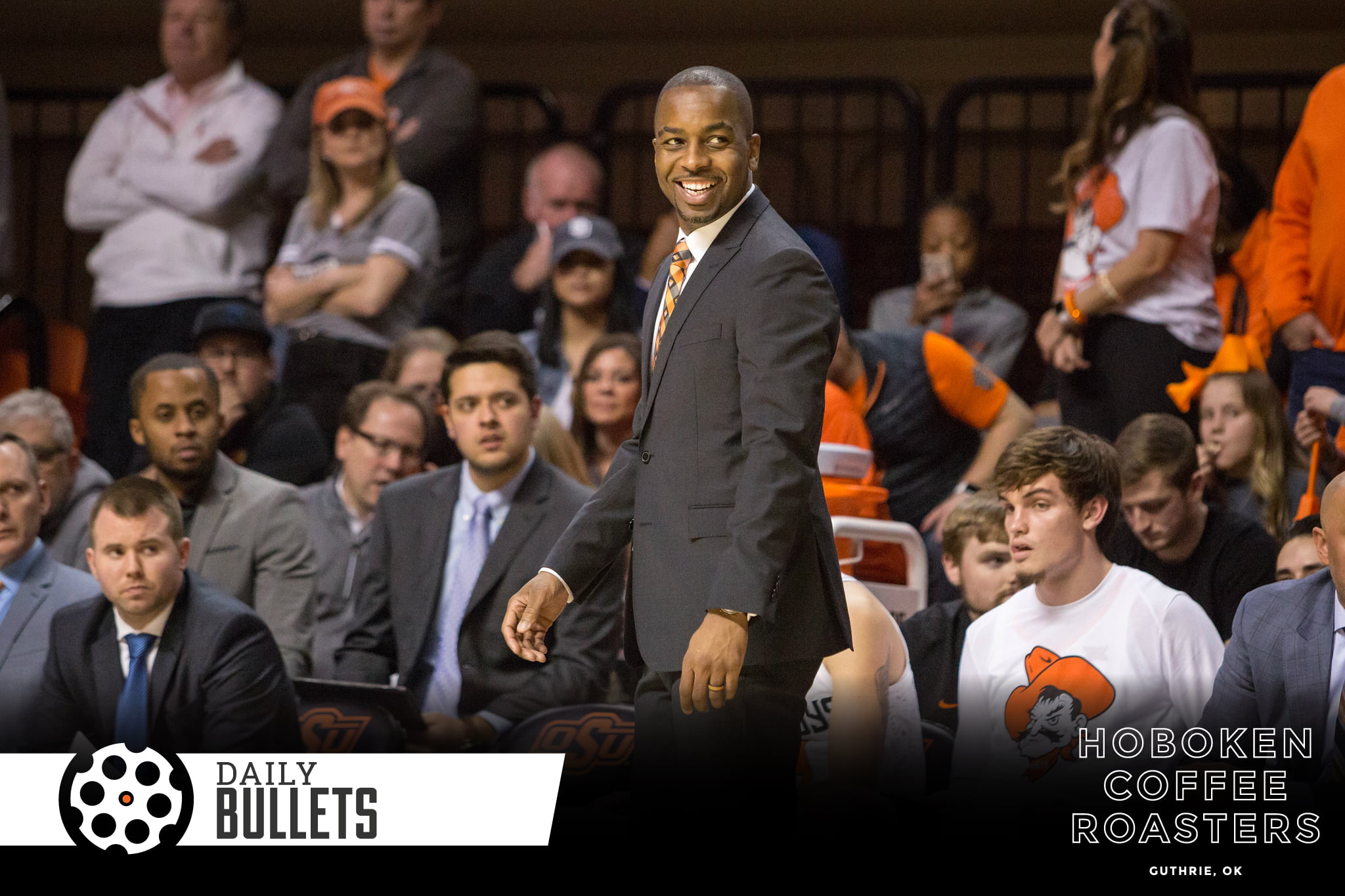 Good morning. We have a new product in our store, and I think you guys will like it. You can check it out right here.

• Is Oklahoma State stockpiling QBs because it’s going to need to use all of them?

The stars are aligning for a shift in Oklahoma State’s offensive philosophy. Not a seismic shift. Mike Gundy isn’t going to shave his mullet and come out running the single wing in August. But one look through the new personnel that will be manning key positions in the Cowboy offense suggests the quarterback run game could be a significant piece of the play-calling. [NewsOK]

I think I’m here for it, even though I don’t love the idea of running through 2-3 QBs because of the inevitable injury risks that come with running your QB. That is, I enjoyed the Mason Rudolph era more than I enjoyed the J.W. Walsh and the merry go round of QBs that surrounded him era.

• Berry Tramel was embedded with Mike Boynton for an entire day. It just happened to be one of the worst days of his tenure as head coach (on the court anyway). Several things stood out to me, and it’s a must read, but here’s what popped maybe the most of anything.

Players will trickle in on game day, before their 2:45 p.m. shootaround. An assistant coach will shoot with them, if they desire. Or they might watch film. But Boynton gives them their space until shootaround. He notes that Syracuse’s Jim Boeheim avoids his players until it’s time to play. “I try not to bother them until I need to see them,” Boynton said. [NewsOK]

I liked seeing Derek White put in a pressure situation like that and pulling off a win. I think it’s good for White to be in front of a big crowd and have a dual come down to him. He is a top level heavyweight that could win a NCAA title this year. With only really one full year as a starter prior to this season he hasn’t had a ton of tough situations like that thrust upon him. Even though you prefer it doesn’t come down to him, it’s a good thing for him to go through something like that. [PFB]

Maybe it’s just the “basketball is in the tank” part of me coming out, but is there anything more exciting than a dual coming down to the last match of the night?

• All the handshakes. CuJo is the keeper of the processes, and it sounds a little more than complicated.

With the Cowboys’ five starters seated on the bench, the other players form a pathway, with Jones waiting at the end. He’s responsible for having whatever handshake Isaac Likekele, Thomas Dziagwa, Lindy Waters, Cam McGriff and Yor Anei want to use that day prepared and memorized. Some of them have multiple, so Jones regularly has to check with them pregame to make sure they’re on the same page. [NewsOK]

Hey, this is fun … something most of the rest of the hoops season has not been.

• Robert Allen has ranked his top 2020 players from the state of Oklahoma.

We’re going to start in-state as I still think Oklahoma prospects are often passed over by Oklahoma State. I’d like to see the Cowboys take a few more homegrown talents. I also think this a good year for offensive line, of which the Cowboys already have a very good one. I think it is a good year for skill players, especially defensive skill players. Okay, here goes with our top Oklahoma prospects. Also, you will notice our list doesn’t fall in line with the 247Sports ranking of Oklahoma prospects. Simply put, we don’t agree with their list. We like to do our own work on this topic. [Go Pokes]

• Dizzy hit seven 3s, but this is not an encouraging stat.

Dziagwa refound his range in the second half, but not much changed in terms of scoring support. Apart from Dziagwa and Likekele, Yor Anei led the Cowboys with six points. Dziagwa was able to score from various, twisting angles, something he needs to be able to do considering he isn’t great at creating shots. [PFB]

• On subscriptions and the NYT. I find stuff like this so fascinating.

• I know Steven already linked this, but I’m posting it again because it’s my favorite story I’ve read in a while. There’s a not-so-underground list of websites all sportswriters use religiously, and the Sports Reference group may be chief among them.