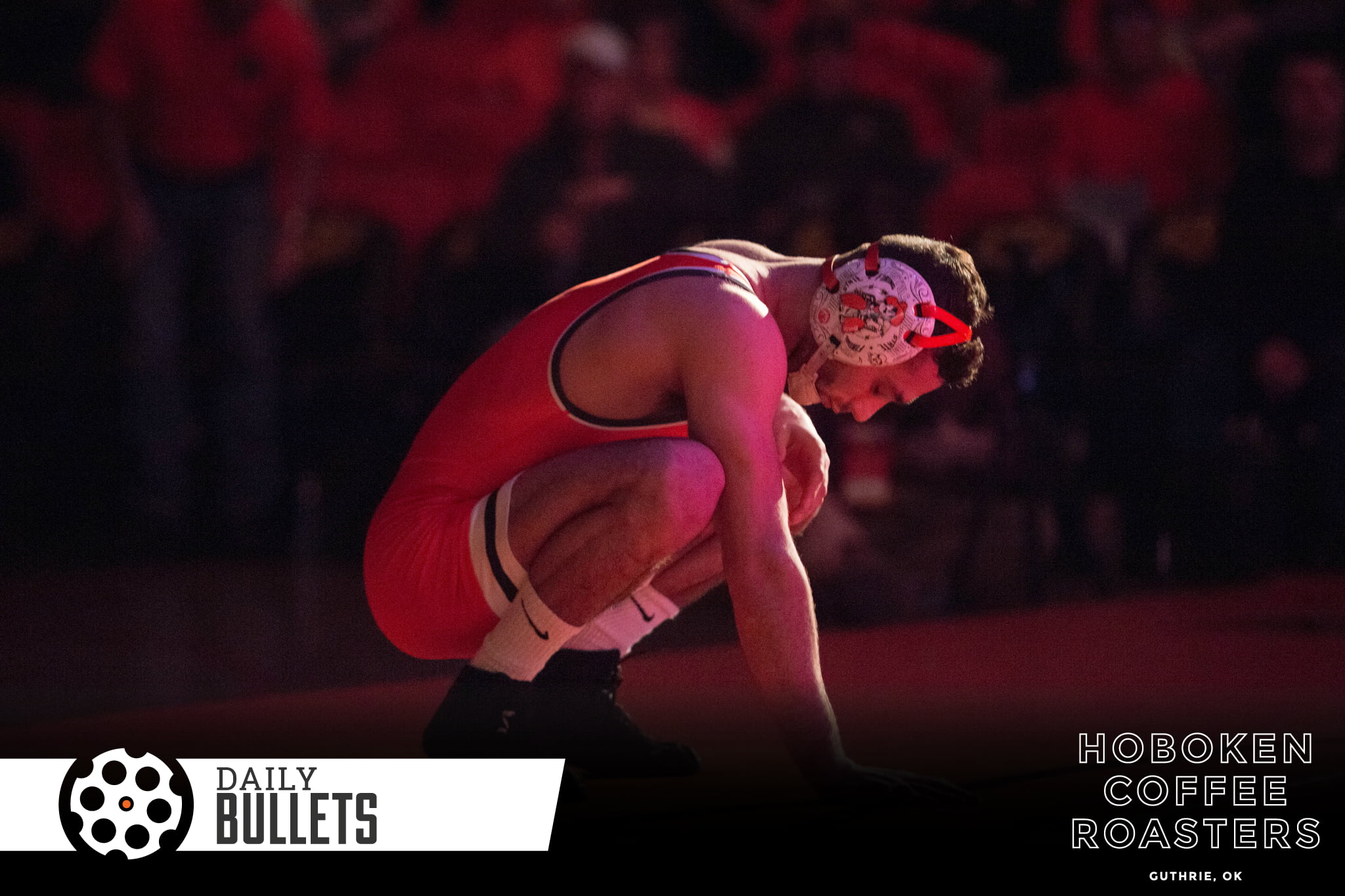 I was asked on Twitter for my hottest take. Many of you have heard this before, but here it is.

• I’m pretty fired up for the OSU-Iowa dual on Saturday. I don’t know if that’s because I’m juxtaposing it with hoops or because I’m actually fired up, but regardless, it should be pretty awesome. Bill Haisten sets it up well here.

OSU and Iowa have a combined total of 57 national titles (34 for the Cowboys, 23 for the Hawkeyes). These schools have produced 225 individual NCAA champions. On nearly 800 occasions, Cowboys and Hawkeyes have achieved All-American designation. These unbelievable numbers define Sunday’s spectacle — Iowa vs. OSU, 2 p.m. at Gallagher-Iba Arena — as a must-see collision of wrestling superpowers.

The Oklahoma City Thunder recorded a tremendous double-overtime victory over Utah on Friday night and hosted Sacramento on Saturday. All over the state, there is meaningful competition in college basketball and in high school basketball and wrestling, but this weekend’s main event is Oklahoma State vs. Iowa. [Tulsa World]

• We might have seen a new low for this season on Saturday.

Halfway through the opening period, OSU had 8 points to K-State’s 25. That’s on pace for a 32-point night. Things didn’t improve much for the Cowboys who fell back as much as 24 in the first. Finding themselves in an that early, deep hole, the Pokes resorted to chucking up 3s, but that was to no avail. The Pokes went 0-for-9 from deep in the first and failed to score 20 points in the first 20 minutes, taking a 42-18 deficit into the break. They never got any closer than 22 the rest of the way. [PFB]

I don’t even have a take. It took a bucket from a walk-on at the very end to keep OSU from tying its worst loss since before the second World War. That’s the entire take.

• Zac Robinson was hired to be an assistant coach for the Rams, which is pretty incredible. Instead of breaking down Jared Goff, he’ll now be coaching him.

It’s an interesting hire. Who knows, maybe Robinson will ascend as quickly as other McVay sidekicks have. If QB Jared Goff is able to continue developing under Robinson’s tutelage, there’s no doubt that his name will soon be thrown about for possible promotions across the league. [Turf Show Times]

• Lindy and Cam are on Tyron’s milk carton.

OSU captains Cameron McGriff, Lindy Waters and Thomas Dziagwa combined for 12 points off 4-for-19 shooting (21 percent) to go with five rebounds and a lone assist. The duo of McGriff and Waters totaled four points, matching that of open tryout walk-ons J.K. Hadlock and Dee Mitchell. A difference is, McGriff and Waters played 49 combined minutes to Hadlock and Mitchell’s 10. [PFB]

When two guys who weren’t on the team a month ago are matching the output of your best guys, you, well you aren’t going to be competitive against anyone, much less against the soon-to-be Big 12 champs.

• More on the OSU-Iowa matchup here with a nice Scott Wright piece on Kaden Gfeller and Daton Fix. Aside: Why do all wrestlers have bizarre names? Gfeller? It’s something I think every time I edit one of Seth’s pieces, but I rarely have the platform to voice that take. So there it is. Anyway, here’s Wright’s piece on the importance of Sunday.

Friends since junior high, Gfeller and Fix met through wrestling, and developed a bond through it. Their combined high school records total more than 300 wins without a defeat, and both have competed successfully internationally.

Last season, both redshirted at OSU, waiting for their opportunity in the brightest spotlight. Eight of Sunday’s 10 matches will feature top-20 wrestlers going head-to-head. [NewsOK]

• Finally, our guy Seth Duckworth has no idea how Sunday is going to go, and that’s part of what makes it so much fun.

More people at this dual or at all the basketball games combined from here on out? Oh, and if you need even more wrestling, here you go.

Konner Doucet makes it 3-0 for #okstate commits in the @OSSAAOnline state finals as he picks up a tech fall in the second period. pic.twitter.com/EXxC36uWmk

• I finished An Absolutely Remarkable Thing (fun) and Praying the Bible (important) this week. Halfway through It Doesn’t Have to be Crazy at Work.