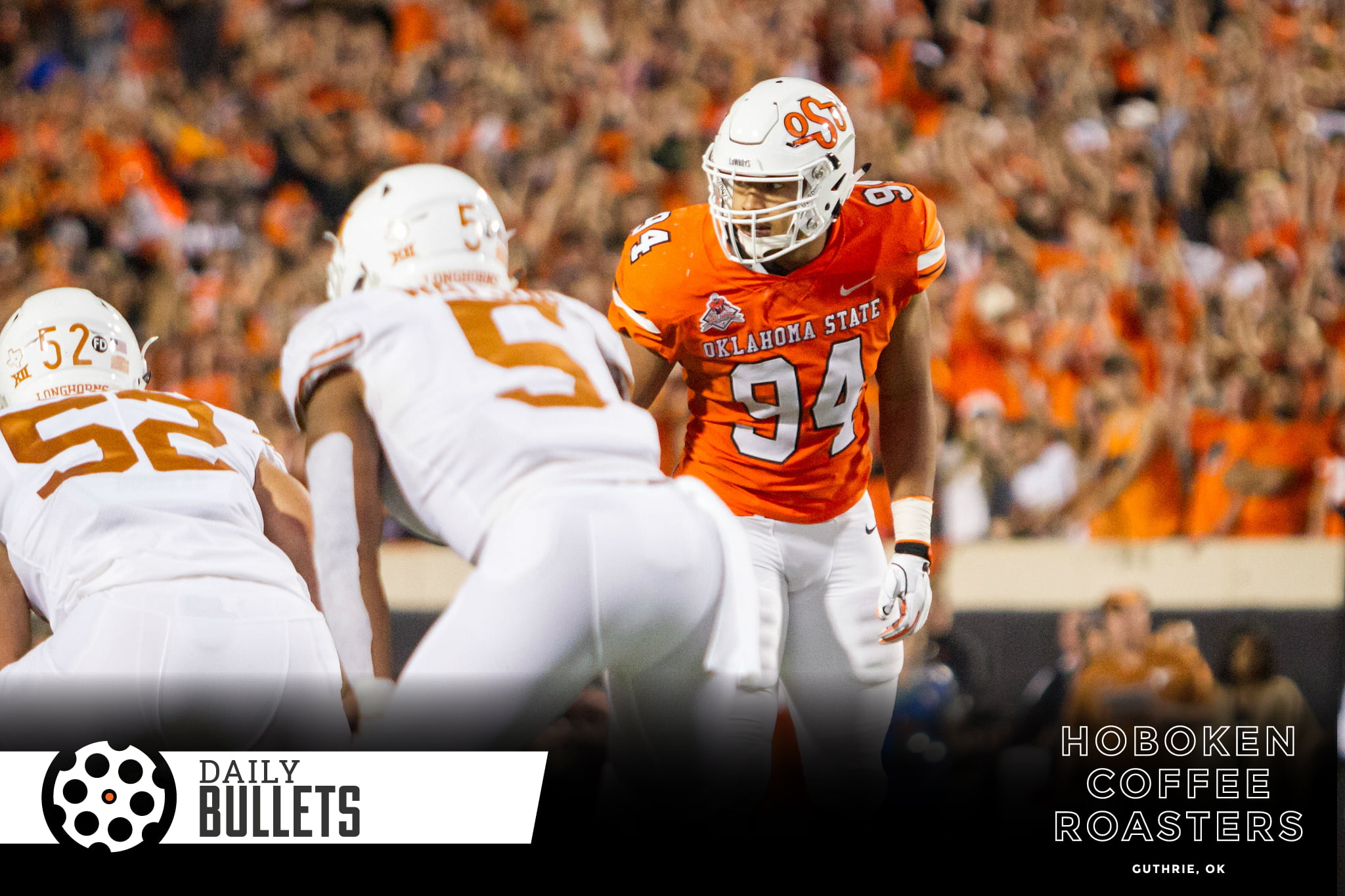 “Everybody is ignorant, only on different subjects.” – Will Rogers

Brunch (11am tip-off) and beat the Mountaineers.

• Robert Allen suggests a new direction in the offensive coordinator search based off of some historical comments by Mike Gundy. And it centers around the idea of adding a new wrinkle to the OSU offense.

The alternative (I’ve) heard Mike Gundy say that if he wanted to add another element to his offense it would be some of the Baylor spread veer or “veer and shoot’. Gundy has a quarterback coming up to be the starter in former Texas Gatorade Player of the Year and standout quarterback Spencer Sanders. Sanders not only has a rifle-type arm but excellent speed, really track speed. [GoPokes]

That’s really interesting – picking maybe some less contaminated fruit off of the Briles tree to stretch the field horizontally and vertically. He throws around names like Phillip Montgomery at Tulsa, Sean Lewis the OC at Syracuse and Matt Mattox and Sterlin Gilbert at McNeese State.

What I like most is hiring somebody with a different perspective that can add to the offensive amalgamation that is the Oklahoma State offense.

• Here’s another OC hire idea outside of any box you could have that I’m particularly on board with:

Andy Kotelnicki (Buffalo OC): Buffalo finished one slot ahead of the Pokes in 2018 in points per drive, and have improved each of the last two years under Kotelnicki. But that’s not what stands out. What stands out is this line from his bio which could send Mike Gundy into a tizzy.

Prior to Whitewater, Kotelnicki served as offensive coordinator at the University of Mary, an NCAA Division II institution in Bismarck, N.D., for two seasons. [PFB]

My favorite thing about the guy is that he did this with a quarterback at the University of Buffalo – a bona fide NFL prospect.
• Part of the challenge for next season will be replacing premium talent at two positions – running back (Justice Hill) and defensive end (Jordan Brailford).  Who will fill in for Brailford?

Two guys that fit that role would be Mike Scott and Brock Martin. Scott finished tied for third on the Cowboys’ roster for sacks on the season with three while Martin spent most of the season playing behind guys and finished the season with seven total tackles. Both guys are fast, agile and can wreak havoc off the edge and with another year in the weight room, a spring ball and fall camp, both guys could come into next season like wrecking balls.

Another guy that could potentially take Brailford’s spot isn’t even on campus: Soni Fonua. [GoPokes]

I really liked what I saw from Scott at moments last year – no clue about Fonua and what he brings but I’ll take depth at defensive line.

• How Mike Boynton has adjusted his coaching style for a team that’s 50 percent freshman has been interesting from a leadership perspective.

“Simplifying it, especially for this team, who, they’ve been through a lot but there’s still a lot in front of us. There’s a lot of basketball to be played against some really good teams.”

This mindset differs from the way Boynton handled his first season. The NCAA Tournament was a constant topic, both with the media and in the locker room. [TulsaWorld]

• After reading a fantastic piece by Jonathan Tjarks on a second-round pick for the Brooklyn Nets (Rodions Kurucs), there was a phrase about this guy’s game that sounded like what OSU is looking for.

It’s not that Kurucs is carrying the team by himself, it’s what his presence on the floor allows his teammates to do. His two-way ability creates more balanced lineups that put everyone around him in a better position to succeed. [The Ringer]

OSU is a solid big man and a two-way wing away from winning a few more Big 12 games. I’d argue that a multi-faceted creator (a la Jawun Evans, Kendall Smith or even Anthony Hickey) would go a long way for this team.

• This on managing the modern inbox is true but also sounds like The Office episode where Michael plays up the stress of the modern office:

“Part of the reason why we get so many emails is that we’ve all been told this story about how we need to respond quickly to be productive and meet expectations,” said John Zeratsky, an author and designer who worked in the tech industry for 15 years. “But if you respond quickly, you have a reputation for being responsive, people send you more messages, and it kind of feeds on itself.” Zeratsky said that he, too, once subscribed to the idea of Inbox Zero, before he realized it was burning him out. [The Atlantic]

• On a more serious note, this on blogging nails the fun in consistently writing and consistently reading something by a particular writer – the feelings of writing in the context of a relationship.

If you have your own blog you serve readers by building a relationship with them. A significant part of the power of a blog is that it combines writing with personality to form a relationship between the writer and the reader. This makes it a deeply personal rather than merely abstract form of communication. [Tim Challies]

I love following certain columnists (Chris Erskine is my favorite to recently discover), regional and national sports writers but the lack of regulation in blogging just brings that to a whole new level.

• The inverted Grand Canyon isn’t as impressive as you think it would be.