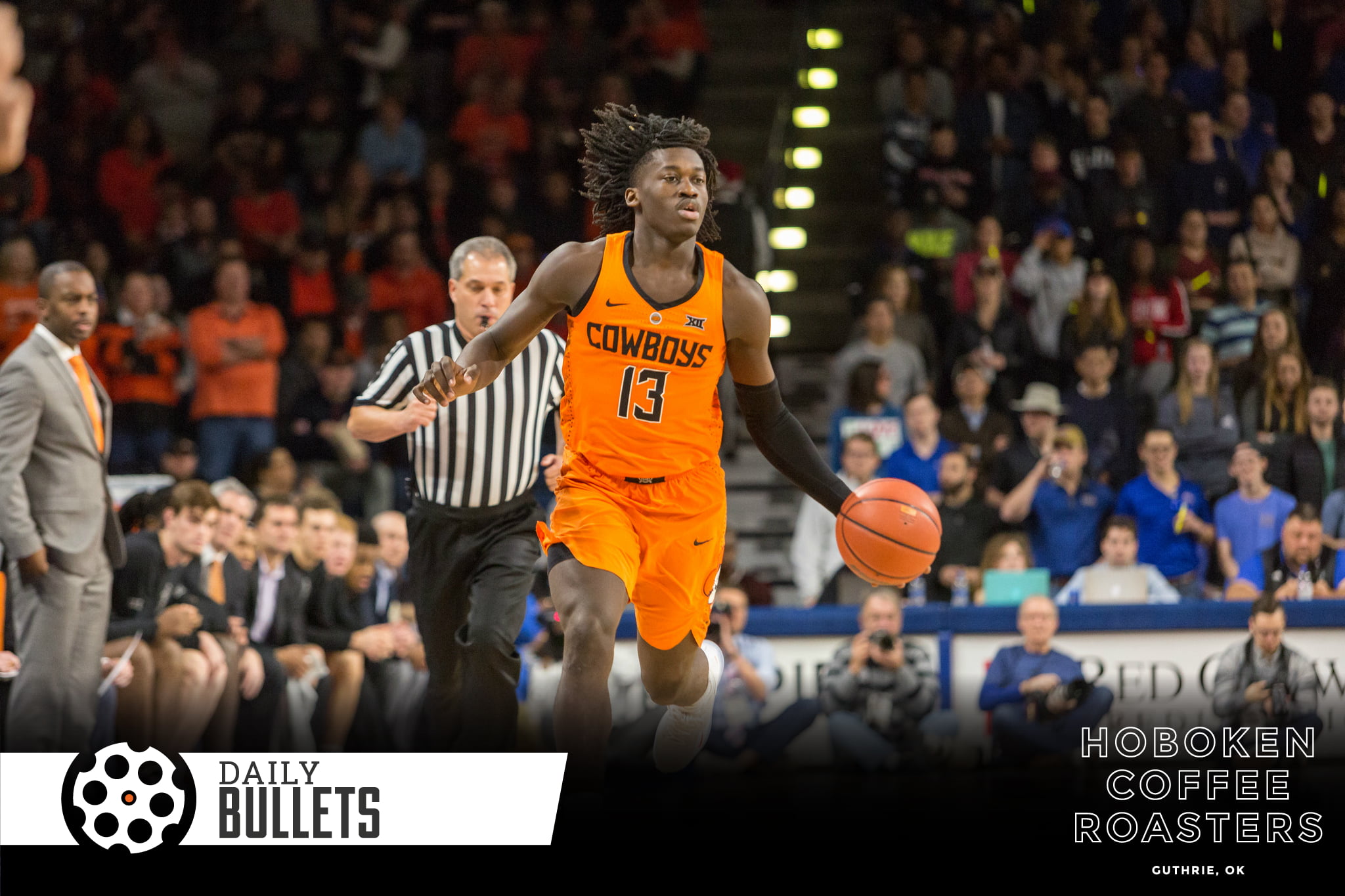 Cowboys against blue and gold teams on Saturday: 1-1. Also I think Kliff just got a raise because Sean McVay won a playoff game.

• We might be underrating what a big deal Israel Antwine’s transfer back to the state of Oklahoma to play for the Pokes actually is. Scott Wright has done a really job reporting this out, and he has some more nuggets here.

Additionally, the academic support staff member who Antwine had directly worked with left the school. “Israel was feeling discombobulated,” Dwayne Antwine said of his son, who deals with a form of autism. “All those people were gone, and it didn’t feel the same to him.”

The 6-foot-4, 290-pound Antwine started all but one game, primarily as a defensive end, at Colorado as a true freshman this past season. [NewsOK]

What is a frustrating — albeit not altogether uncommon — situation in Boulder is a nice shot in the arm for the Pokes up front on defense. I know CU went 5-7 last year, but the dude started 11 games in a Power 5 conference on the defensive line!

Likekele started hot making back-to-back layups in the first four minutes of the game, and stayed engaged throughout. When the Cowboys needed a bucket and a spark, Ice delivered. And a couple of times he delivered big including a bingeworthy slam and this coast-to-coast one-man scoring possession that displayed all of his tools — physicality, quickness, vision and an ability to get a bucket when needed. [PFB]

Cox has become really good at getting to the heart of a game, a play and a player. Always fun to edit, always fun to read.

• Oklahoma State played two of the top 21 games in college football last season against the two teams that played for the Big 12 title.

• Let’s push the OSU-WVU game forward a little bit into next week as OSU gets Baylor on Monday evening. This is what I was thinking after the Pokes won in Morgantown.

The trick now is sustaining it. They didn’t do that last year — every time they got a big road win or beat a top-25 team, they’d lose two games they shouldn’t MIKE GUNDY ON LINE 1 — we’ll see what Boynton learned from that and if this year’s Cowboys can keep a little momentum going. [PFB]

Also, here’s our postgame show in case you missed it. We posted it as a podcast, too.

• Come for the Photoshop of Dabo as George Washington, stay for the intrigue of Clemson becoming a Big 12 team in a SEC team’s body.

The upshot of all of this was that Dabo essentially assembled a Big 12-style program with coordinators from the Big 12 that had experience either executing that style (Morris) or defending it (Venables) and then combined those strategies with the resources of an SEC program, all within the comfortable confines of the ACC. [SB Nation]

My biggest takeaway (other than how dumb OU was for dumping Brent Venables) is that you still have to recruit at an elite level and in the right way to beat Bama. Also, I’m not convinced that an available blueprint to beat Bama means much when it comes to actually beating Bama.

• If CH3 is talking, I’m listening, and his quotes here on the future of golf are interesting.

Charles Howell III also went to Oklahoma State and keeps tabs on college golf, “so I kind of knew what was coming.”

It is kind of wild how much youth has overtaken experience. Maybe that’s happened in all sports, but it seems like it’s been more of a swing in golf, maybe because experience was such a benefit to begin with.

I want to see a 100-yard dash between Cheetah and Kyler.

You really thought the conditions were gonna slow down Tyreek? ? @cheetah pic.twitter.com/Ws0FSPpIl5

Speaking of the Chiefs.

And speaking of the playoffs.

Blake Jarwin gets things going early with a first down catch that facilitates a #DallasCowboys opening-drive score. #okstate pic.twitter.com/8VKDnUkVIY

• This is specifically about blogging in the Christian world, but it applies more universally, and as someone who has tried to build a career on it, I found it fascinating.

• Loved this on Patty Mahomes and his arm.

• I probably need to read this on being on time about 100 times over.