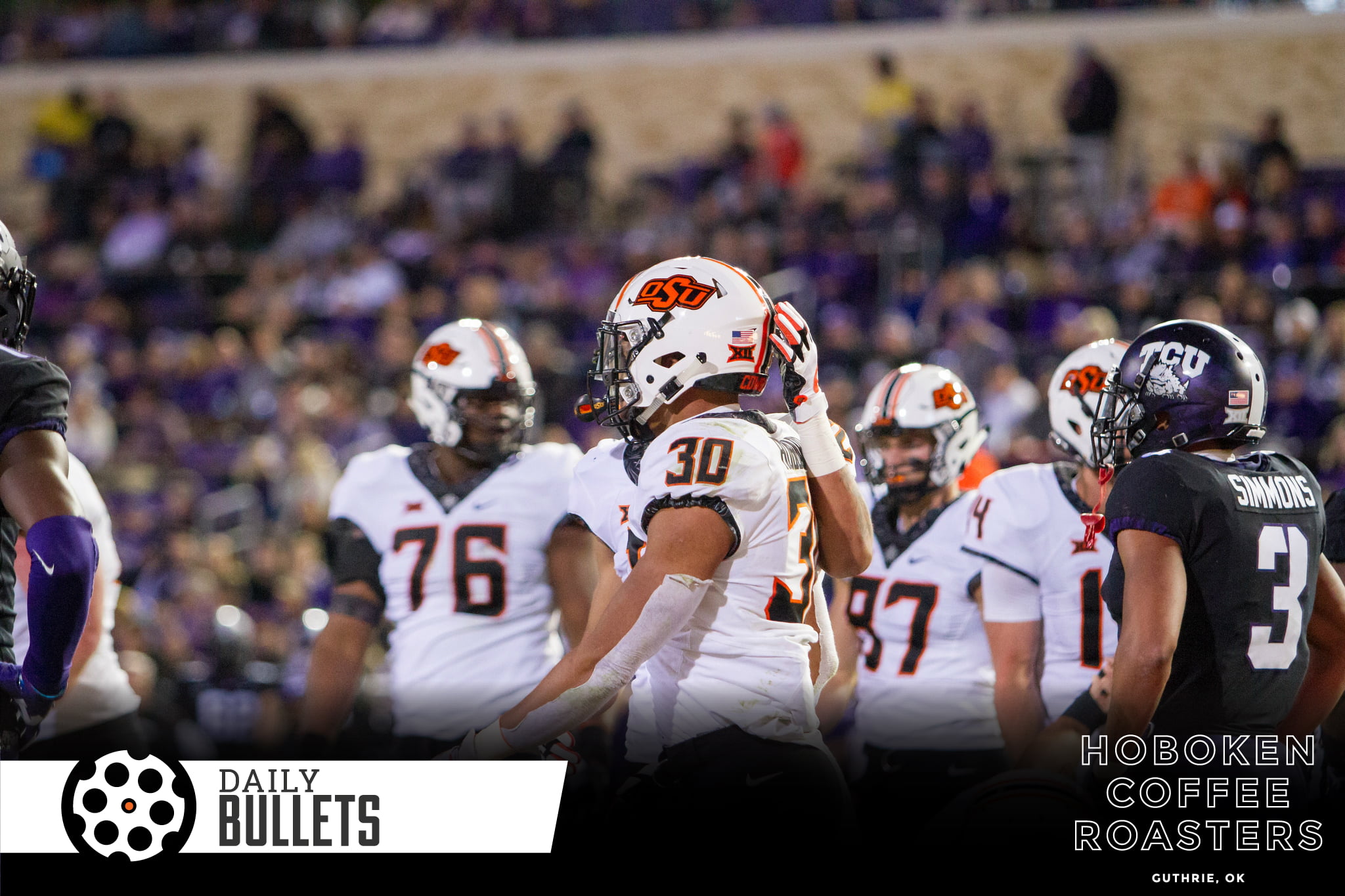 Good morning, welcome to our first week in the last three months without football in the foreseeable future. What will we do with ourselves? Oh yeah, that’s right. It’s Boynton SZN.

Boynton and OSU took down No. 19 LSU by 13 points on Saturday in Orlando. Marshall Scott was fired up (as the rest of us were) and wrote about Crime Dog’s 28-point performance.

Also this is what next year’s Thanksgiving tournament situation is probably going to look like.

Sources: Syracuse, Oklahoma State, and Ole Miss will highlight the 2019 Preseason NIT. Event is still searching for a fourth team to fill out the field.

I didn’t mention this in any of my notes, but this was pretty hilarious on Saturday in Ft. Worth.

Smith, the game’s referee, took every opportunity he could to overexplain each call made on the field. For example, “The ruling on the field is an incomplete pass. The ball was on the ground.” Late in the game, he announced OSU was facing second down when it was actually third, and after the TCU crowd gave him a hard time, he added, “You are all right. It’s third down.” [NewsOK]

I always enjoy Nathan’s posts like that. He’s good at noticing things, which is something I really appreciate.

It’s not a huge loss, but John Kolar is gone at semester. He was the the eighth-highest ranked recruit on the roster. Save me the “stars don’t matter” chatter. Tyron, Tylan, CJ Moore, Spencer, LC, Darrion Daniels and Kemah Siverand are all ahead of him.

Oklahoma State quarterback John Kolar announced Sunday afternoon he intends to graduate from the university and transfer at the conclusion of the semester, with an eye on playing out his final year of eligibility at a different institution. [PFB]

if Will Grier and other former top recruits do not transfer into West Virginia or Matt Campbell isn't some football whisperer/God, the blue-chip ratio almost predicted the exact Big 12 standings this season, via @Rivals recruiting rankings. pic.twitter.com/cx4VRsHW8g

Berry on bigger CFB is always cheeky and hilarious.

And it’s conceivable both OU and Ohio State could slip into the field. But that almost surely would require Clemson losing to Pittsburgh in the ACC title game; Pitt has the same chance as a Libertarian in the general election. Notre Dame already is in the clubhouse at 12-0; Alabama also is 12-0, and if the Crimson Tide loses to Georgia in the SEC title game, both would make the playoff. You can’t have the playoff without Bama; it’s in the bylaws. [NewsOK]

OU is going to slip into the playoffs which — whispers — is a good thing for Oklahoma State. Here’s some good RA reporting on OSU’s potential bowl destination, which he says might still (!) be the Texas Bowl (but I think this is only possible if OU gets into the CFP or Texas gets a NY6 bowl.

The Texas Bowl would like to have the Aggies and the Cowboys. Memphis and the Liberty Bowl would like the same match-up if the Texas Bowl shopped for another. There will be some posturing and the folks at ESPN, which televise both games will weigh in some too. Bowl assignments are not announced until next Sunday. [Go Pokes]

I wrote about this yesterday a Lil’Jordan, but it’s worth repeating. Oklahoma State is the first team in 64 years (!) to beat three top 20 teams and lose to five unranked teams in the same season. It literally does not happen!

That’s kind of unbelievable, right? I mean, it’s actually believable considering how much of a loss we’re all at right now, but if you would have told me in August that OSU would beat Texas and West Virginia and dance with OU for 59 minutes, I would have had NY6 destinations dancing in my head. [PFB]

One unique thing happened in the locker room afterwards as we’d been hearing about some of the younger players stepping up in leadership. On defense veterans talk about Kolby Peel and Jarrick Bernard, well one player told us when head coach Mike Gundy asked if any of the players had anything that running back Chuba Hubbard spoke up and apologized for his mistakes in the game and urged all other players to join him in working hard to eliminate mistakes and make the team the best it can be. [Go Pokes]

Him and Tyron and Tylan will be the production vets next year when Sanders, Moore, Greenwood and Jeter all slide into whatever roles they’re going to fill on this team.

Nothing New Under the Sun

Not the first time I’ve used that subheader, but I thought this on icing kickers was pretty interesting.

I think it’s reasonable to conclude that icing the kicker can impact the kickers probability of success at distances greater than 25 yards, with an increasing impact as the distance increases. If an opposing coach has a time out to use, using it to iced the kicker is a smart thing to do. [SB Nation]

Here’s our Sunday postgame show. Enjoy my faces. Meme me. Whatever you need to do to make this season feel better.