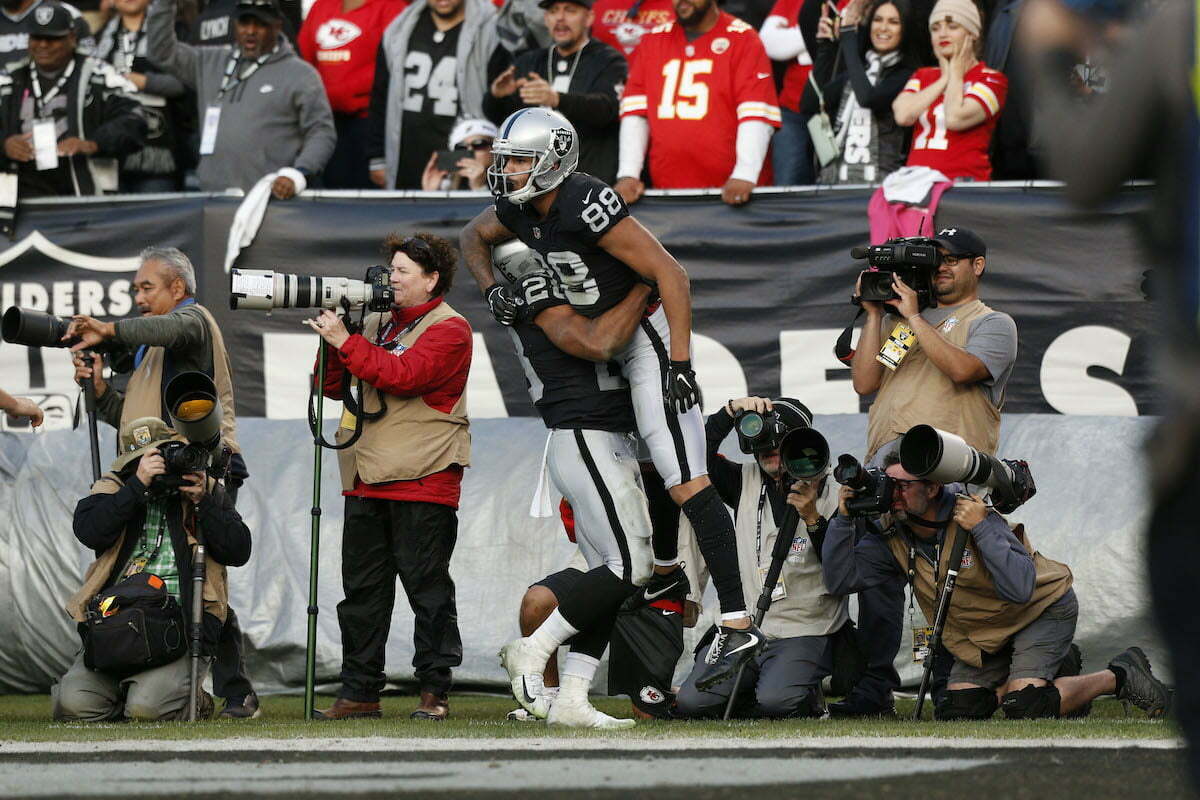 There’s a lot to talk about after the NFL’s 13th week, especially as it pertains to former Pokes. Let’s get started with a rookie who grabbed his first career TD.

When I say “finally” it’s not because the former Oklahoma State receiver has tried so many times and been denied from the promised land. He’s just finally been given the opportunity to play.

After falling all the way to the seventh round in last year’s NFL Draft, Ateman was then a victim of an influx of wideout talent which led to his being cut by first-year (second term) Raiders coach Jon Gruden.

But Ateman stuck on the practice squad and bided his time, and when a mounting list of injuries facilitated it, he made the most of his NFL debut.

During the 40-33 loss to Kansas City, he finally got to record his first pro touchdown. Ateman caught two of his four targets for just 16 yards but that celebration was definitely worth it.

Carson didn’t perform any eye-popping acrobatics during his Seahawks’ 43-16 rout of the 49ers. In fact, he left in the fourth quarter with a dislocated finger. Before leaving, he did tote the rock a team-high 13 times for 69 yards.

Man…. I would not want to take on Chris Carson full speed. pic.twitter.com/zAClhsJpja

Seattle head coach Pete Carroll was asked about his status after the game.

“Chris dislocated his finger, the top of his index finger and should be OK, but we’ve got to wait and see,” said Carroll.

A report by the Seattle Times on Monday night reinforced the notion that Carson “should be able to play” in the Seahawks’ Monday Night Game against Minnesota next week.

Tre Flowers Plays Through the Pain

Carson’s current (and former) teammate Tre Flowers also left the game with a shoulder injury of his own. Early in the second half, it was announced that Flowers was questionable to return, but Seattle’s starting right CB was back in the game shortly thereafter.

Tre Flowers is back on the field approximately 47 seconds after the announcement in the press box he was questionable.

He finished with three total tackles and played in 97 percent of the Seahawks’ defensive snaps.

Ahead of that game — which served as a rematch between Seattle and its former Pro Bowl cornerback Richard Sherman — Flowers said he was able to pick Sherman’s brain. He no doubt got some useful pointers as the college safety continues to adjust to his role of starting NFL corner.

Even though Flowers and Sherman never shared a field, the rookie quickly learned of Sherman’s unique willingness to extend a helping hand to younger players. During organized team activities in June, linebacker Bobby Wagner connected Sherman with Flowers, who wanted to pick the veteran’s brain beyond what he saw on film.

“I text him once and I got a couple paragraphs back,” Flowers said. “Just seeing his knowledge and how much he cares about people, it’s tremendous.” [The Athletic]

Emmanuel Ogbah Picks Up Another Sack

The former Big 12 Defensive Lineman of the Year, registered a sack for just the third time this season to go along with a season-high six tackles, a tackle for loss and that QB hit during the Browns’ 29-13 loss to the Texans.

Emmanuel Ogbah controls his gap, penetrates, defeats the block of Fulton & stops this zone play dead in its tracks. Block destruction at its finest! #Browns pic.twitter.com/Ant0SvCGx4

The only thing consistent about the rookie wideout’s reps this year have been their inconsistency. A week after being called out publicly by his quarterback, Washington registered his second “inactive” of the season and did not dress for the Steelers’ 33-30 loss to the Chargers.

I joked earlier in the year that Marcell Ateman would out-perform James Washington statistically in the two former Cowboys’ rookie seasons. I guess I might have been right.

In 10 games, Washington has eight catches on 25 targets for 77 yards and one TD. Ateman — in just three games — has nine catches on 19 targets and 82 yards and that above-mentioned score.

It is important to remember that Washington resides beneath a future first-ballot Hall of Famer in Antonio Brown and an absolute stud in JuJu Smith-Schuster on the Steel City receiver totem pole, and that Ateman has peaked his had out among a mangled MASH wide receiver unit in Oakland.

But you have to wonder if the landing spot we thought would be nurturing for the reigning Biletnikoff winner might actually be snuffing out his flame. Are the dumpster-fire Raiders actually a better launching pad for wideout talent than the Steelers? I guess we’ll see.

Don’t get your orange knickers in a twist, it was all in fun. The former Oklahoma State tackle and first round pick, had a little fun ahead of his Chargers’ 33-30 comeback win over the Steelers in Pittsburgh.

During the ceremonious starting lineup introductions, Okung (at least temporarily) betrayed his alma mater for a fictitious one.

Wakanda is a fictional country from Marvel’s Black Panther comic book series and the ensuing successful movie franchise, for those who don’t know.

The former Cowboy Back made his third start on Thursday night as the Cowboys upset the Saints 13-10. He caught his lone target for 12 yards.

With the Cowboys up 10-0 late in the first half and facing a third-and-7, Dak Prescott looked the way of his second-year tight end who picked up a crucial first down. Dallas would end that drive with a field goal which would be just enough to hold off the suddenly sluggish Saints offense.

A week after being called out by his head coach, Dan Bailey missed yet another field goal over the weekend with his 56-yard attempt veering wide right. He went 1-for-2 during the Vikings’ 24-10 loss to the Patriots.

This makes six misses in 10 games this season and an completion rate of 72.7 percent for the place kicker who previously held the title of the NFL’s most accurate kicker in history.

Before joining Minnesota earlier this year, Bailey held a career completion percentage of 88.2. But in 2018 only Green Bay’s Mason Crosby has more misses (seven) and that’s in two more games. Bailey averaged less than four misses per season during his seven years in Dallas.

• After leaving last week’s game with a quadriceps injury, Lane Taylor was fully active, appearing in all 76 offensive snaps during Green Bay’s 20-17 loss to Arizona.

• Tyler Patmon appeared in just five plays on special teams but failed to record a stat during the Jaguars’ 6-0 win over the Colts.