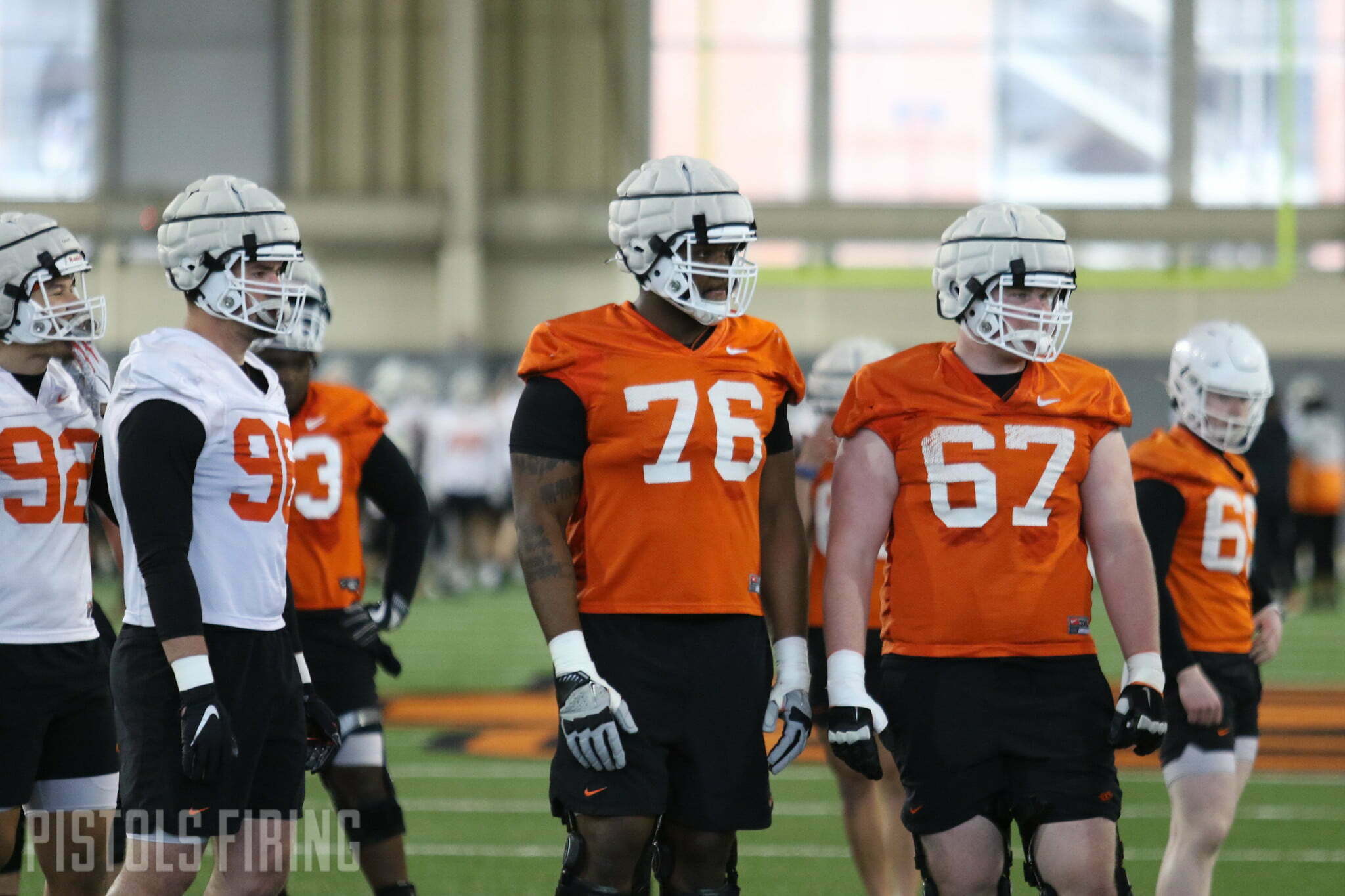 STILLWATER — The Cowboys enter 2022 with almost an embarrassment of riches at skill positions, but whether or not they can get back to Arlington will have a lot to do with how the Pokes do up front.

Oklahoma State lost starters Josh Sills and Danny Godlevske this offseason, but the Cowboys have recently hit the transfer portal hard, adding Prince Pines, Casey Collier and Jason Brooks. Those three will add to the talent Charlie Dickey has returning. Here are some story lines to follow on OSU’s offensive line this spring.

Etienne Goes Down in Weight, Moves Up Depth Chart

Caleb Etienne was a fan-favorite addition in the Cowboys’ 2021 class because he was so massive.

A junior college product, Etienne was listed at 6-foot-7, 350 pounds on OSU’s 2021 roster. But he played in only three games in his first season with the program. Now listed at 325 pounds, Etienne is going with the starters in spring practice, fellow lineman Cole Birmingham said.

“He’s doing great,” Birmingham said Monday. “He’s running with the ones. He’s working on everything. He’s spending a lot more time watching film and making sure he’s doing the right thing. He’s progressed a whole bunch. It’s honestly really exciting to see. We kind of need that one more anchor in the line, so it’s good.”

Because he played in only three games, Etienne retained a redshirt from last season. Entering 2022, Etienne is listed as a redshirt junior, but he should have three seasons of eligibility remaining because of the redshirt and the pandemic.

“He’s doing good,” OSU coach Mike Gundy said. “I mean, we’ve only had one week of practice, but he’s doing good. He’s 50 pounds lighter, so he feels a lot better. He’s moving around, starting to pick the system up.”

Birmingham Enjoying Move Back to Interior

With Etienne’s emergence at left tackle, that allows Birmingham to move back on the inside of the O-line, a spot he said is more comfortable for him.

Birmingham started OSU’s 2019 season-opener at right guard, but an injury in that Tulsa game kept him out until OSU’s Cheez-It Bowl win against Miami. He started 2020 at right guard, as well, before Gundy’s least favorite game of musical chairs (injured linemen) had Birmingham start the rest of the season protecting Spencer Sanders’ blindside at left tackle. Birmingham was the only offensive player to start every game for OSU last season.

Birmingham said he has moved into the left guard spot that Josh Sills left vacant this spring.

“That’s where I thought I was gonna play coming here,” Birmingham said. “I helped the team out by playing left tackle last year, but I’m definitely more comfortable at guard. It’s more of my play style.

“Guard is a little bit more aggressive. You’re always kind of directly in contact with someone. I feel more comfortable being aggressive like that. At tackle, it’s more finesse. You kind of have to make sure you kick out, make sure you have the edge rusher. Guard is just hands on a lot quicker. So, just keeping the guy in front of you more on pass [protection] and just driving more on my run blocks.”

With Sills and Godlevske off searching for landing spots in the NFL, OSU’s offensive line room had a leadership void entering the offseason, but Birmingham said that void has been filled by the only senior on the Pokes’ spring roster — Hunter Woodard.

OSU’s right guard, Woodard was a Big 12 honorable mention last season. He was a team captain in three games and had 10 pancakes and 32 knockdowns in 2021. Birmingham said Woodard isn’t as vocal as Sills was, but Birmingham added that wasn’t necessarily a bad thing.

“It’s a strong leadership style,” Birmingham said. “He’s not as vocal as Josh. Josh was a very vocal guy, but we look up to him just the same. Everything he says we listen to.”