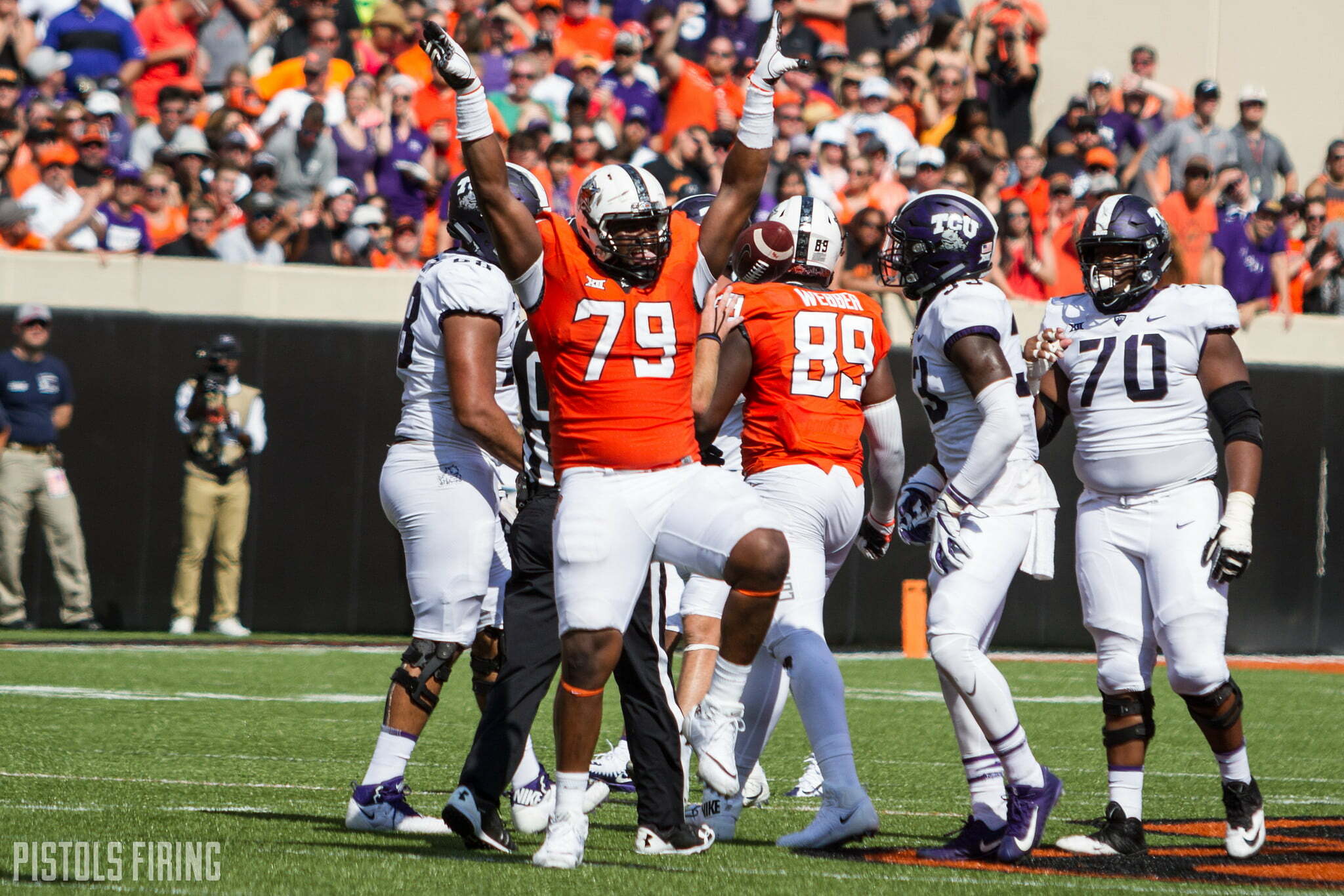 Thinking about this list, I wanted to take a look at who the biggest losses are for the Cowboys heading into 2019. Some of these guys probably weren’t going to see much playing time next year, if any, but others could have made significant contributions for this Cowboy team.

Below I’ll list who I personally think are the three most impactful transfers for OSU as they move forward into next season.

Out of the group listed above, I believe Daniels is the biggest loss. The Dallas, Texas native only played four games in 2018 before going down with injury, but he had been a force on the OSU defensive line in 2017. The former Cowboy defensive tackle used his strength to bust through the offensive line and stop the ball carrier at or behind the line of scrimmage on his way to 26 total tackles, including 5 tackles for loss a year ago.  He consistently made plays like the one below.

Due to Daniels only playing in four games in 2018, he was eligible to redshirt and come back to play for the Cowboys next year, but he has decided to transfer to Nebraska and team up with his younger brother.

The former four-star recruit was the most talented defensive tackle on this roster, which is a spot the Cowboys don’t return much experience. There’s still talent at this position, but having Daniels back for one more season to lead this defensive line would’ve been huge. His departure leaves defensive tackle as one of the Pokes’ biggest question marks heading in 2019.

The former NJCAA Defensive Player of the Year Patrick Macon redshirted in 2017 and missed the entire 2018 season with a foot injury. He was originally recruited at linebacker, however, there was talk of him moving to defensive end in 2019, which might have played a role in his decision to transfer from Stillwater.

At Arizona Western College, Macon recorded 177 tackles, including 40 tackles for loss and 13 sacks over a two-year span. He was an extremely physical player and used his speed to quickly close on the opposing ball carrier, as shown in the following video.

Similar to defensive tackle, defensive end is a position the Cowboys lack experience heading into next year, so having someone with Macon’s athleticism and physicality would’ve been helpful to the depth at this spot. It sounds like it might have been a mutual split between OSU and Macon, but it would have been nice to have someone with his talent on the roster moving forward.

With the Cowboys losing a veteran in Kenneth Edison-McGruder and some experience in Thabo Mwaniki, having soon-to-be redshirt senior Za’Carrius Green on the roster would’ve been a plus in the leadership department. The Duncanville, Texas product was most likely slotted for a backup role in 2019, but he’s shown he can contribute and make plays for the Pokes not only on defense, but on special teams as well.

Green recorded 24 tackles and had 1 fumble recovery, shown in the clip above, in his three seasons at OSU. He was a leader in the locker room, and seemed to be a good fit as a safety in Jim Knowles’ defensive scheme due to his aggressiveness.

The Cowboys still have eight safeties returning, and incoming freshman Thomas Harper has the versatility to play this position at the college level. So, although it might not be a big blow depth wise, I think the loss of Green’s leadership will definitely be felt in 2019. But, it’s important to remember that Green has not yet officially transferred.

I believe Jalen McCleskey is also a big loss for the Pokes, but with the emergence of Landon Wolf at the inside receiver position, and the depth OSU has at this spot, I decided to leave him off my list. Thabo Mwaniki will also be missed, but Oklahoma State still has a lot of returning experience at the safety position.

By my count, if all of these players end up transferring, Oklahoma State will be at 81 scholarships for 2019. This is four below the NCAA limit of 85. The Oklahoman‘s Scott Wright wrote about this a little over a week ago, and had the total at 81, 37 on offense, 42 on defense and 2 on special teams. However, this was before the news of Hambright leaning towards staying in Stillwater and Green considering leaving, which would now put the totals at 38 on offense, 41 on defense and two on special teams. Scott also notes that even though Landon Wolf had been placed on scholarship, he doesn’t currently count towards the limit of 85.