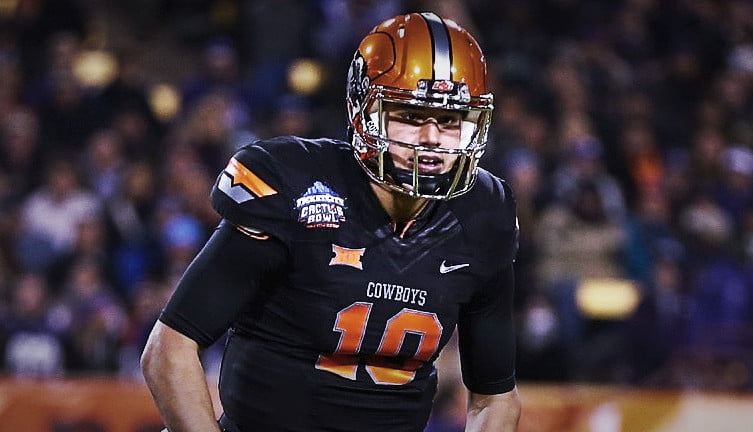 This is quite a bit overdue so my apologies for that. It’s June now and it feels like we’re closer to the fall starting than we are to spring ball. Still, I thought it might be fun to look back at a few things we learned about what figures to be, at the very least, one of the more compelling teams in the Big 12 this upcoming season.

1. Mason Rudolph is the one

I’m not sure how it can get more metaphorical than this. Strangely, his standing at Oklahoma State was solidified more to me by the fact that Gundy got his affairs in order at the top of the QB food chain early in the offseason than by anything Rudolph did at the end of last season.

We learned retroactively that he might have he might have been even better in the bowl game than we thought. And we learned that he’s going to enjoy the riches of Boone’s house for many years. Ditto the reciprocal.

Linebacker isn’t necessarily a position where OSU is thin, but Jordan Burton is going to help lock things down for Glenn Spencer’s side.

“We got very lucky with Victor Salako and Burton — two guys that we need to fill a spot for us,” Mike Gundy told the Tulsa World. “We hit a home run in those spots. They filled a couple of voids.”

3. Victor Salako might be the most important incoming “recruit”

Speaking of the big man from UAB, he’s probably going to be the most important newcomer on this team since it still sounds like the offensive line needs all the help they can get.

“He’s the biggest player we have,” said Gundy. “He’s just been so pleasant. I can only imagine being that big and playing at the tempo that we compete at.

“He has a smile on his face. He plays hard and plays with effort. Never says a word. Those are the type of players that you need in your program in order to win big. They’re unselfish and they love to play football.”

4. Defensive line appears to be a strength (again!)

Kyle Boone wrote about this earlier in the spring, but OSU’s defensive has a real chance to be even better in 2015 then it was in 2014. And it was really good in 2014, averaging 2.5 sacks per game and 7.5 tackles for loss (both in the top 35 in the country). However, it was also not that great in passing downs so there’s certainly room for improvement.

The rotation will mostly include Vincent Taylor, Motekiai Maile and Vili Leveni and I think any two of the three could start. Glenn Spencer is locked in on Taylor.

“He’s the guy we really needed to come on,” Spencer said after the spring game. “If I had to give a most improved from the guys that were here last year it would be Vincent Taylor. Gundy, on the other hand, loves Maile.

“I thought he weighed 285,” he told the Tulsa World. “The other day, they said he weighed 306. I guess he’s maybe up to 310 now. He’s showing signs of being athletic. His attitude has been good and he seems to understand the tempo at this level of football.”

5. Wide Receiver is the position we should be least concerned about

OSU should put out a competition before the season where you try and guess what order the receivers will finish in when it comes to receiving yards.

Winner gets to shoot quail with Boone and Holder or something. “We have a lot of receivers, more than I can ever remember, that can play,” J.W. Walsh told Scout.

We gonna talk about this or just leave things be?

The entire spring was like a one-man reunion tour that was reminiscent of the 2010-13 Gundy. Teams go as their coaches and QBs go and it would appear that the head coach-quarterback combo OSU has in Stillwater is going to thrive.

Time to feed the monster.

8. Chris Carson is playing for more than orange and black

Carson is one of the five most compelling figures of Oklahoma State football right now to me for a variety of reasons. His story is equal parts sad and inspiring and I’m intrigued to see if his dominance at Butler JC can carry over into the Big 12.

“My family is struggling, but we’re maintaining,” he told the Tulsa World. “I don’t want to see my family struggle.”

9. The position that most excited me is defensive back

We didn’t really learn this because we already knew it going in, but OSU is going to be embarrassingly loaded in the defensive backfield.

From Ramon Richards’ has swag to Michael Hunter pulling a Tyler Patmon. Oh yeah, and the best corner in the Big 12 might wear No. 1 for the Cowboys.

10. This spring was purposeful

Last spring sounded like a little bit of a mess. This year, there was a plan and it sounds like it was executed.

“I mentioned at this time last year that I was really concerned about our youth,” Mike Gundy told the Tulsa World. “We ended up playing 21 freshmen and redshirt freshmen. That’s why I was really concerned. Now, we have more veteran guys, but they’re still really young. I think they’ll be fine. … Look at our team. They look great.”

“We have good leadership and I talk about that a lot, and I think sometimes fans overlook the leadership part,” he added. “It’s just enjoyable for me.” Zach Crabtree agreed.

“We’ve got a lot of room for improvement, but we look better at this point than we did last year. There’s definitely a swagger, and we’re carrying ourselves a little different.”

11. The NCAA penalties were nothing

I mean really, nothing.

I almost forgot about this. I think we’re getting new uniforms, too.

13. OSU is committed to the “Cowboy back”

We saw this at the very end of last year and it appears OSU is 100 percent committed to the fullback/tight end combo player. Here’s the Tulsa World on the spring game:

It became clear with the hiring of Jason McEndoo that OSU would reintroduce the tight end position to the offense. Zac Veatch, who played guard last year, is seen as a potentially strong blocking tight end, but it turns out he can do more. On back-to-back plays, Veatch sealed the edge for Rennie Childs to break a gain of 60 yards and then caught a 10-yard TD pass.

So that’s it. I’m sure there are 13 more things you could come up with, but those are 13 of my main takeaways from the spring. Central Michigan is less than 100 days away.