Related: I understand that it needs to be a headline nationally but it’s not really big news.. (NewsOK)

A must read here on Ramon Richards’ responsibility. (Tulsa World)

I never want to do anything that would make Gundy want to put me on a Stairmaster. (NewsOK)

How much longer can Hawaii sustain an athletic program? Asking the state for more money for football doesn’t seem like a good long-term plan. Where’s Timmy Chang when you need him? (Yahoo)

No, Rennie, no! “Personally, all that All-American stuff really doesn’t matter. It all comes down to what happens on the football field. There are 11 guys on their team and 11 guys on our team. It’s who wants it the most.” (NewsOK)

They could have cut the headline off here after five words. (CBS)

Everybody always wants to fix college football’s postseason, but what’s wrong with good games. Fix September. Not December. Ehh, I don’t watch but I know a lot of people do. (NewsOK)

This is crazy to watch — down goes the west side of Kyle Field. (CBS)

This is why the Big 12 isn’t pumping teams into the Playoff: Over the last six seasons, the Big 12 has had six different teams – 60 percent of its membership – claim a conference trophy in football.

No other peer conference has had as many different champions since 2009. (Big 12 Sports)

We can’t even find the mental RAM to be despondent that this former pizza bowl (Domino’s) has never found another pizza-based title sponsor to call its own, not when TicketCity has decamped from the Heart of Dallas Bowl to add another link in the never-ending sponsorship exasperation hootenanny chain. (Grantland)

But no school brings the fan base and the tradition and the television allure of BYU. (NewsOK)

I wouldn’t expect the humor from Dan Mullen but this is pretty great. (CBS)

‘Crootin news: As Louisiana’s top-ranked player and the nation’s No. 2 wide receiver, Tyron Johnson obviously is a wanted man. Three teams, however, lead the ESPN 300 receiver’s race — and two of them are in the Big 12. Johnson has Texas Tech and Oklahoma State as finalists. (ESPN Insider)

Is going 43-0 and winning three straight Texas 6A state titles good or no? (Fox SW)

Photos from Selfie Day. Here’s Gundy’s “who am I going to fire for this on Monday” face. 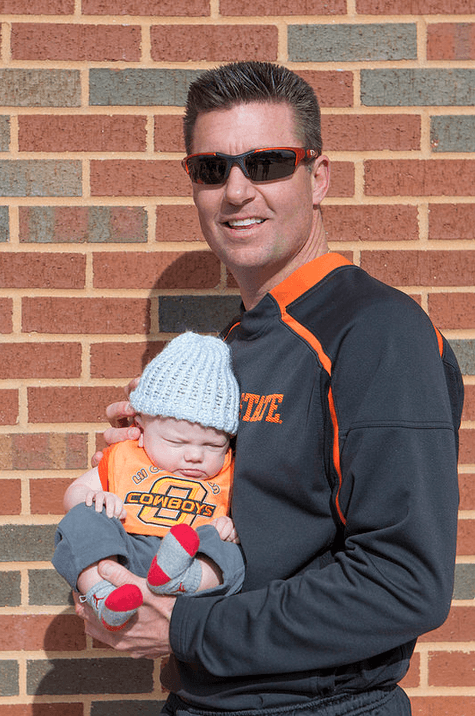 This is pretty good. The Chris Berman one is unreal. So is Lou Holtz.

Notes and thoughts on Maryland’s win over Oklahoma State on Sunday. (PFB)

Ford: “They just stopped all of our momentum with almost every run that we made. We had too many bad possessions of offense. They were the better team today, plain and simple.” Pretty much sums it up. (NewsOK)

We won’t be able to say “well he just didn’t try” when Ford is no longer the coach in Stillwater. (okstate)

At least OSU’s schedule gets easier from h…. (NewsOK)

Ford: “After the game in the locker room, I liked what I saw. They were listening to me and wanting to know, ‘What do we need to do.’ They were upset. There were even some tears.” TCU approves. (NewsOK)

The Kentucky-UCLA matchup was borderline homicidal. UCLA scored seven in the first half. Seven! (Yahoo)

I’m a big Liz Donohoe fan. She had 21 in a W over USC yesterday. (okstate)

More Ford: “We’re close but our room for error is falling. We’re not going to beat people with talent. It’s how we played for the last five minutes is how we have to learn how to play for 40 minutes.” (O’Colly)

Photos from the basketball game on Sunday. Eddie’s looking old, you guys. (Flickr)

Shaq’s reaction when EJ drops the mic is the best thing I saw this morning. (Big Lead)

Here are the highlights from yesterday.

Wrestling finished fourth at the Reno Tournament of Champions over the weekend. (okstate)

A year in cartoons. Via RJ Young. (Tulsa World)

One take on Serial: All this show did was make a bunch of sheltered, oblivious, middle-class Americans feel very smart about themselves. Out here, stuck in real life with the rest of us, it was just another day in the courthouse. (Deadspin)

Cool post on how you shouldn’t be limited by physical shortcomings. Rather, they can be an advantage. (Kleon)

The gift everyone wants this Christmas. (Acuff)

One difference is that once you’ve committed to doing something daily, you find that the spirit moves you, daily. (Godin)