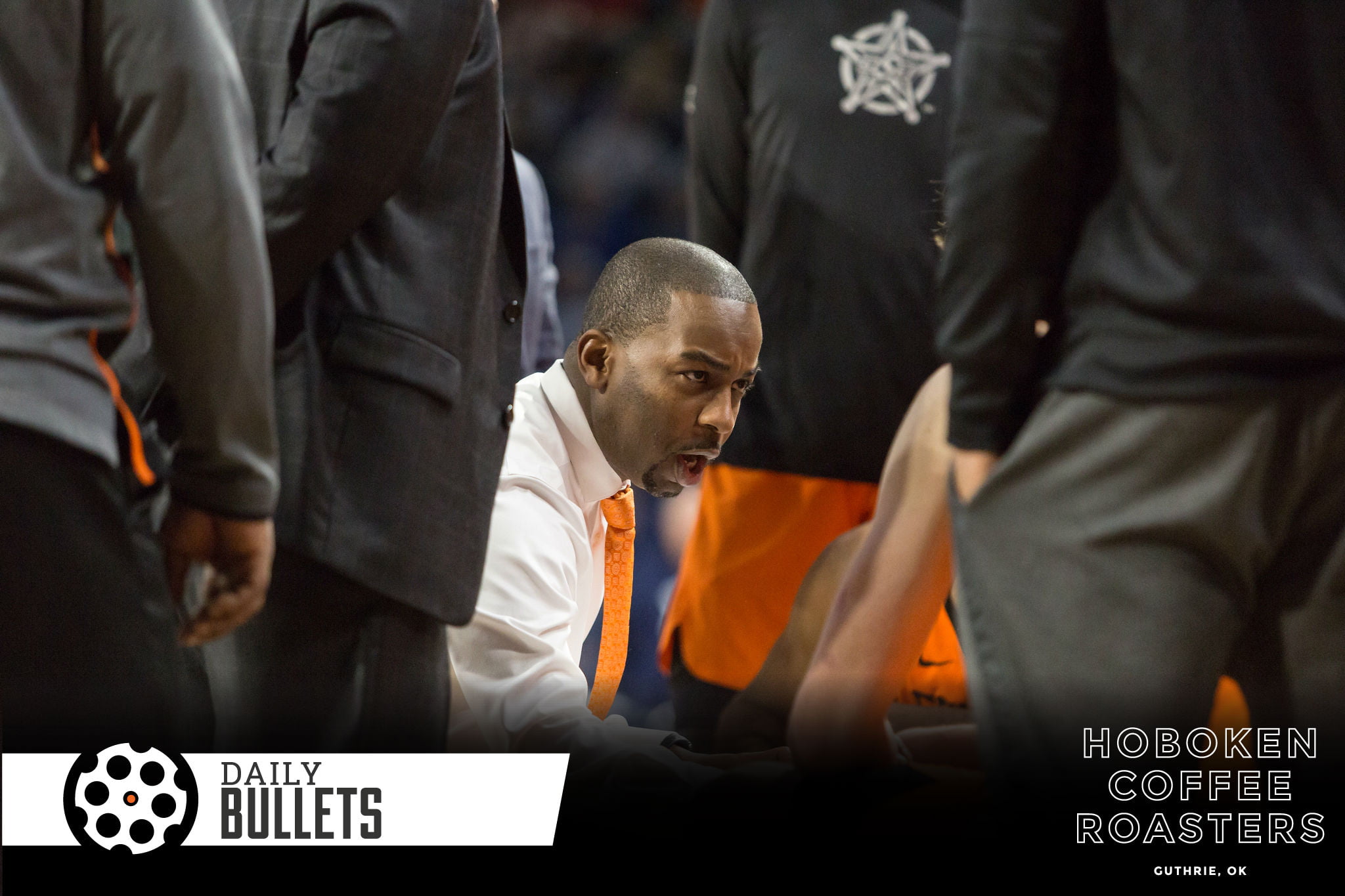 After a touching moment post-game where Eddie and Kelvin Sampson talked, Sampson had some comments about his time coaching in the Bedlam rivalry… and they sound eerily similar to what’s currently going on in Bedlam.

“I told someone that as you get older you look back at certain things, but when I first got to Oklahoma, it was really a blessing for me that Coach Sutton was the coach at Oklahoma State ’cause he made me a better coach.

“I was a young guy and I tried to do the best I could. It was a tough league. It was the Big 8 when I first got into the league. I think I was 37 years old, and half the time, I didn’t know whether I was on foot or horseback. I was coaching against all these older guys that were so much better coaches than I was, and then when we got to the Big 12, the league spread, and then all of a sudden, we had 12 schools, but it was always, for me, and I think Oklahoma State, too, you always focus on your rival, but Coach Sutton made me a better coach, and I’ll always look back on those times knowing that if you don’t prepare your team well and have a really, really good plan, you’re gonna struggle against ’em because you knew he would. I thought about that a lot. [NewsOK]

A gracious remark by Sampson, Eddie helped a 37-year-old coach by competing against him. Wouldn’t you know it, next month OSU’s young coach will turn 37 and he’s cutting his teeth competing against a 66-year-old with a Final Four pedigree.

These two had some epic #Bedlam battles over the years. Very classy gesture by Kelvin Sampson to go visit Eddie Sutton after Houston’s win over #OKState. Sampson even gave Sutton a kiss on the cheek as he said goodbye. pic.twitter.com/HYcn4NBW0Y

Looking at the benefits of bowl practice more closely – who should benefit the most?

At multiple points during OSU’s 6-6 regular season, Gundy said his young team could use another spring football.

The Cowboys are using their practices this month for that purpose. It’s a chance to give young players repetitions, ones they can’t get during a regular season where practice opportunities fly by.

While the bowl game might not be exciting for the fan base given the way the season unfolded, this is why it’s important to the OSU program. Quarterbacks Dru Brown and Spencer Sanders are classified as “first-year players,” and thus not available to do interviews, but this month is a chance to get a head start for 2019. [TulsaWorld]

As the media kicked the tires conversationally on practice reps for backup QBs through the year, Gundy mentioned how limited practice time is and how it’s most important to get the starter ready. The extra reps with guys who play on Saturdays is definitely beneficial for the 2019 QB candidates.

And GoPokes’ Bobby A. confirms the backups are getting their reps under center.

As head coach Mike Gundy promised the early bowl practices, actually a good chunk of them are going to be dedicated to that “extra spring practice” and young players and back-ups will get lots of work. That includes freshman quarterback Spencer Sanders, the Texas Gatorade Player of the Year as a senior and a dynamo in leading Denton Ryan deep into the playoffs his sophomore, junior, and senior seasons. It also includes Hawaii grad transfer Dru Brown that started two seasons for Hawaii. [GoPokes]

Something Tylan Wallace mentioned that’s led to his success this year was watching James Washington do it last year.

While he caught seven passes, that’s what he mostly did — absorbed information from James Washington, college football’s best receiver in 2017. He watched the way Washington fought for 50-50 balls and worked to make it a strength of his when his time came in 2018.

“Watching him do that showed that I, to be an undersized receiver, you have to be able to go and do that and make plays,” Wallace said earlier this season. “So I feel like that’s one thing I really took to heart and realized I had to do.” [TulsaWorld]

Could the transition from one game-breaking receiver to another have been more smooth?

Video: Gundy, Brailford, and Cornelius talk Mizzou….Big fan of these Army uniforms from yesterday – a tribute to WWI….Waiting his turn appears to be paying off for Cowboy running back LD Brown….Kyler Murray wins Big 12’s seventh Heisman – too early Heisman odds for 2019 and how heavy is the Heisman?

It’s so fun watching an OSU guard play bully-ball down low… (seems like the) first since Smart to do it effectively.

Couldn’t agree more with this – it should be easy to ax those folks for future years.

People who voted before last Saturday should never be allowed to vote again. https://t.co/eWAmN1Up4K

…with that being said, it looks like it wasn’t a serious problem. My how one game changes things so much.

You can see the ground Kyler Murray made up in the final weekend of the season. Tua Tagovailoa held the lead during conference championships … by day’s end he did not. #KylerKnows #Sooners pic.twitter.com/oTDQfCKW1g