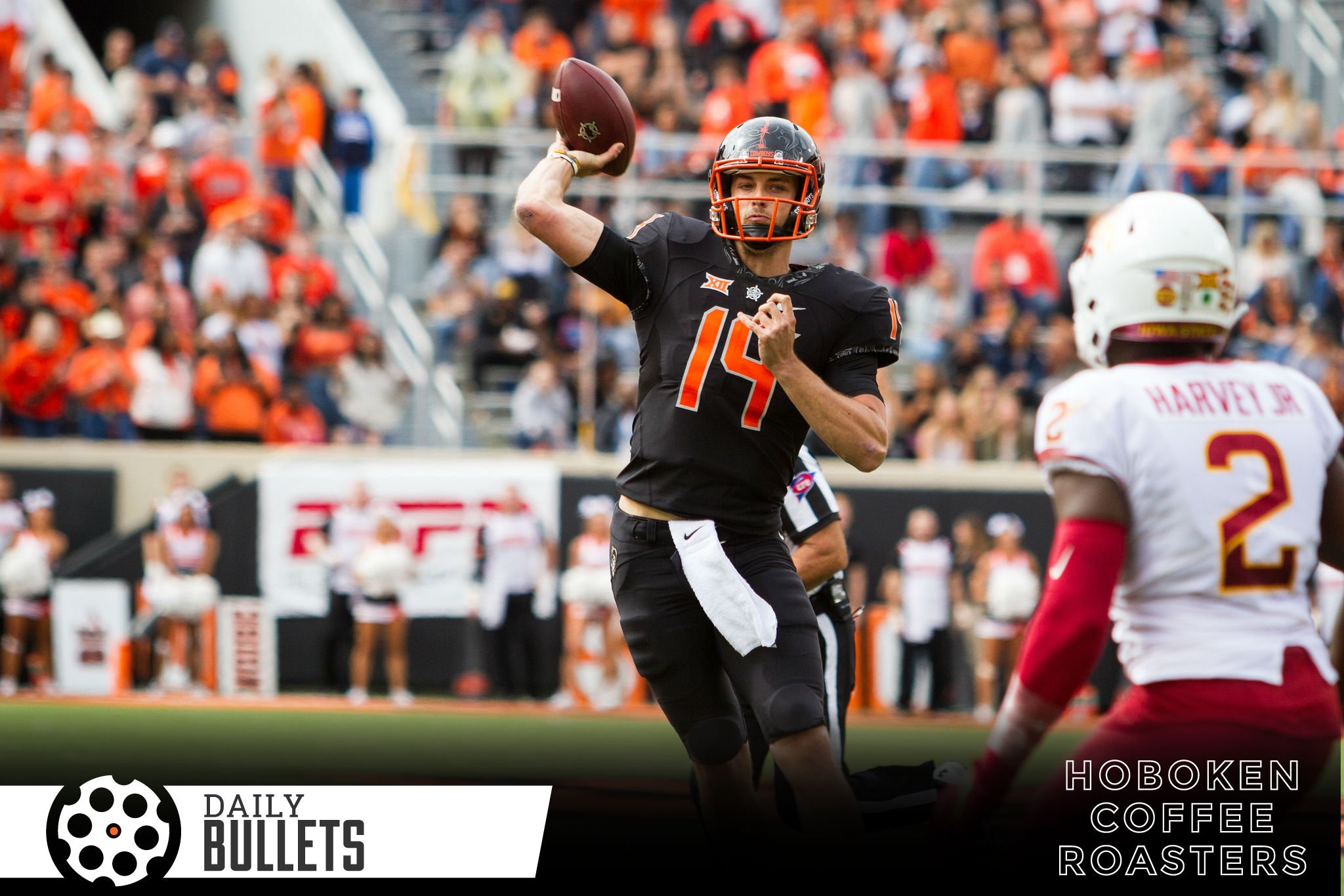 Mandeville here – well-rested and back in the saddle. Thanks again to Porter for covering for me and the Pokes for making it a good week to go off the map.

I’ll come right outta the chute with my thoughts on the QB battle – Taylor Cornelius ain’t bad… but he may be a bad fit for 2018 Cowboy Football.

There will be OSU fans who demand a quarterback change, but not even a Brandon Weeden or a Rudolph or a Tom Brady would thrive behind this OSU offensive line.

If Cowboy QB Taylor Cornelius had worn a pedometer on Saturday, his scrambling steps easily would have been in the 200-yard neighborhood.

Cornelius, Gundy said, was “running for his life.”

P.S.: can’t we just come up with lots of two-second passes to call for like Tech does? It’s fine if we want to make Iowa State look like the Steel Curtain but I’d rather we just call for some quicker routes.

If you’re trying to link up the 2018 Cowboy Football season with a team from previous years, it’s hard to point at a season in the last five, six-years as most similar.

Saturday confirmed one thing: This won’t be 2013. While both teams had a fifth-year senior at quarterback (Clint Chelf and Taylor Cornelius) and a first-year defensive coordinator (Glenn Spencer and Jim Knowles), this year’s team has already matched the number of regular-season losses that the 2013 squad had.

The 48-42 loss to Iowa State drops Oklahoma State to 1-2 in Big 12 play for the first time since 2006. It isn’t something fans are used to, and their consternation showed in the empty seats and angry tweets.

But there needs to be a little perspective: This isn’t 2014, either. I covered the 2014 team, my first on the beat. Against a decent defense, like the one Iowa State brought to Stillwater on Saturday, it couldn’t move the ball. Its five consecutive losses came by an average of 24.6 points. [TulsaWorld]

Too prolific for a 2014 offense but not successful enough to sniff 2013’s win total.

The Bedlam game in Norman will tipoff at 1 p.m. on Jan. 5 on @FOXSportsSW. #c2e #okstate pic.twitter.com/mAvGrNhaGd

Boone can use it as a paper-weight…

So grateful to my good friend and visionary #okstate athletic director Mike Holder for bringing me a replica of the #ncaagolf championship trophy we won this year. Go Pokes! pic.twitter.com/UuXB03U8fx

Or maybe steal a page from John Smith’s book – a door stop.

When you have so many Big 12 Championships that one of the trophies doubles as a doorstop… @CowboyWrestling #GOAT pic.twitter.com/6pGrpOrpFf

This four-star safety that OSU went after is back on the trail again.