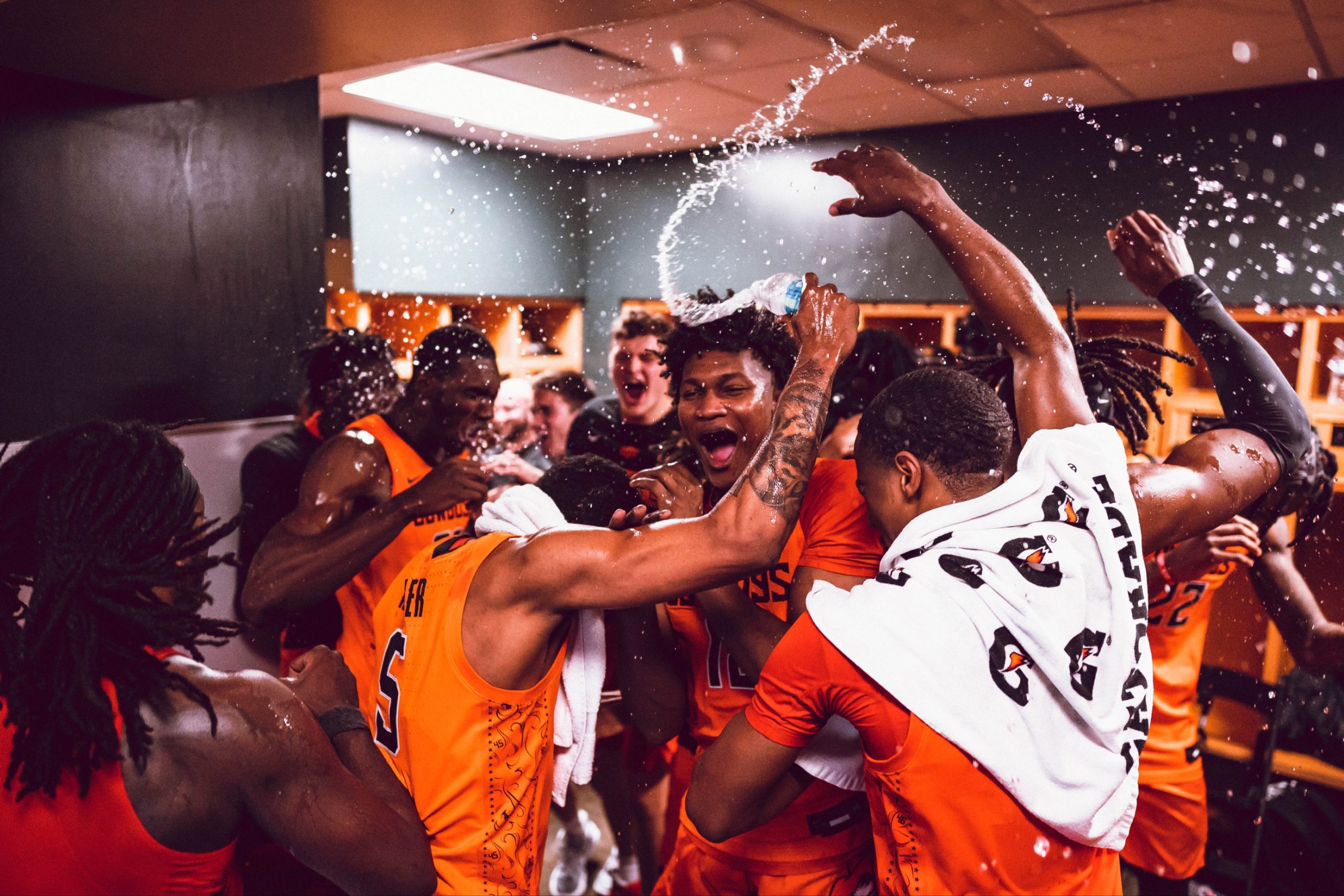 Oklahoma State beat No. 1 Baylor 61-54 in the Ferrell Center. Here are five thoughts on the game.

Bryce Thompson’s college career didn’t get off to the start nearly everyone had expected, but he showed Saturday afternoon in Waco that all of those accolades he earned in high school were warranted.

Against the defending national champs and No. 1 team in the country, Thompson dropped a career-high 19 points, but it wasn’t just that he had 19 points. He had answers for a surging Baylor.

Toward the end of the first half, Baylor went on a 6-0 run. Thompson answered with a 3 and a breakaway dunk.

Midway through the second half, Baylor’s LJ Cryer hit a 3 to finally pull the Bears within single digits. Thompson answered with his smooth mid-range jumper.

Then with the Ferrell Center at its loudest with the Bears down a point with 1:21 to play, Thompson not only scored the final six points of the game, he secured a game-icing steal. A scorer, Thompson’s defense had been questioned at the collegiate level.

“All I can attest to is just the work, man,” Thompson said. “Just putting lots of hours in. It’s just kind of like another rep. I’ve been blessed with gifts and talents, and I’m just able to go out there and exercise them to the best of my ability.”

The five-star recruit turned sophomore transfer finished with the 19 points on 7-for-15 shooting, two rebounds, one assist and two steals. With a need for good free-throw shooting late, Mike Boynton got the ball in Thompson’s hands, and Thompson went 4-for-4.

“He’s a big-time player,” Boynton said. “There’s a reason we recruited him as hard as we did out of high school, and that once he was available again in the spring, there was no thought in our minds to try to get him back home. He showed up today in a big way and really was a key cog into us keeping a little distance for a while. Let alone the defensive play he made there late. He’s made so much growth on the defensive end of the court. It makes you proud that he’s a kid, as talented as he is, who will continue to get better because he wants to listen and be coached.”

2. It Finally Came Together

An identity on offense had been an issue for the Cowboys throughout this season, but somehow at the No. 1 team in the country’s place, it was there.

The first half saw the Cowboys play stifling defense which led to transition offense. The Cowboys led by as many as 18 in the first half, and it came because Baylor shot 26% from the field in the half and went into the locker room just 2-for-13 from deep.

OSU, meanwhile, had 11 fast-break points in the first half, quickly pushing Baylor misses up the floor. The Cowboys had nine first-half assists. Layups were dropping. Dunks were getting driven through the rim. OSU was a confident basketball team. That was evident because OSU shot 38% from 3 in the first half after shooting a woeful 29% on the year entering Saturday.

“We played with a level of determination today that I haven’t seen in a while,” Boynton said. “If we can do that more consistently, because everybody who played scored, and when we focus on trying to help each other, we’re a really good team.”

Boynton’s team of long, athletic basketball players finally looked comfortable, and it’s so strange that scenario came after the Pokes were reeling on the third game of a wild road trip.

After two poor road performances earlier this week, after traveling thousands of miles from Stillwater to Morgantown to Lubbock to Waco, this team had no right to go into the defending national champ’s building and win. But the Cowboys did.

“You learn that you’re capable,” Thompson said. “You’re capable of beating any team in this league. It’s the best league in the country. Day in, day out, you’re playing a great opponent with a chance to win. If we know anything, we know we have what it takes now.”

The team with no postseason basketball to play for proved it still belonged in college basketball’s best conference on Saturday, and it was pretty cool to see.

“What I’ve learned [on the road trip] is we are who I believed at the beginning of the season we could be,” Boynton said. “We’re that team. The record may not reflect that, and I know people may say, ‘He’s just saying that because they won.’ I haven’t seen our team flinch.

This is the first time in program history OSU has beaten a No. 1 team in the AP Poll on that team’s home floor.

This is what OSU basketball looked like the last time something of this magnitude has happened:

The Big 12 has shown its parity a lot in this young season, but Saturday might’ve taken the cake.

A reeling OSU team beat Baylor in Waco. A white-hot Texas Tech fell to a Kansas State team that started league play 0-4. A Top 25 Texas squad fell to an Iowa State team that had lost three of four.

This game has to be good for the Cowboys’ confidence. But to get a snowball rolling, the Pokes have to push it through a desert.