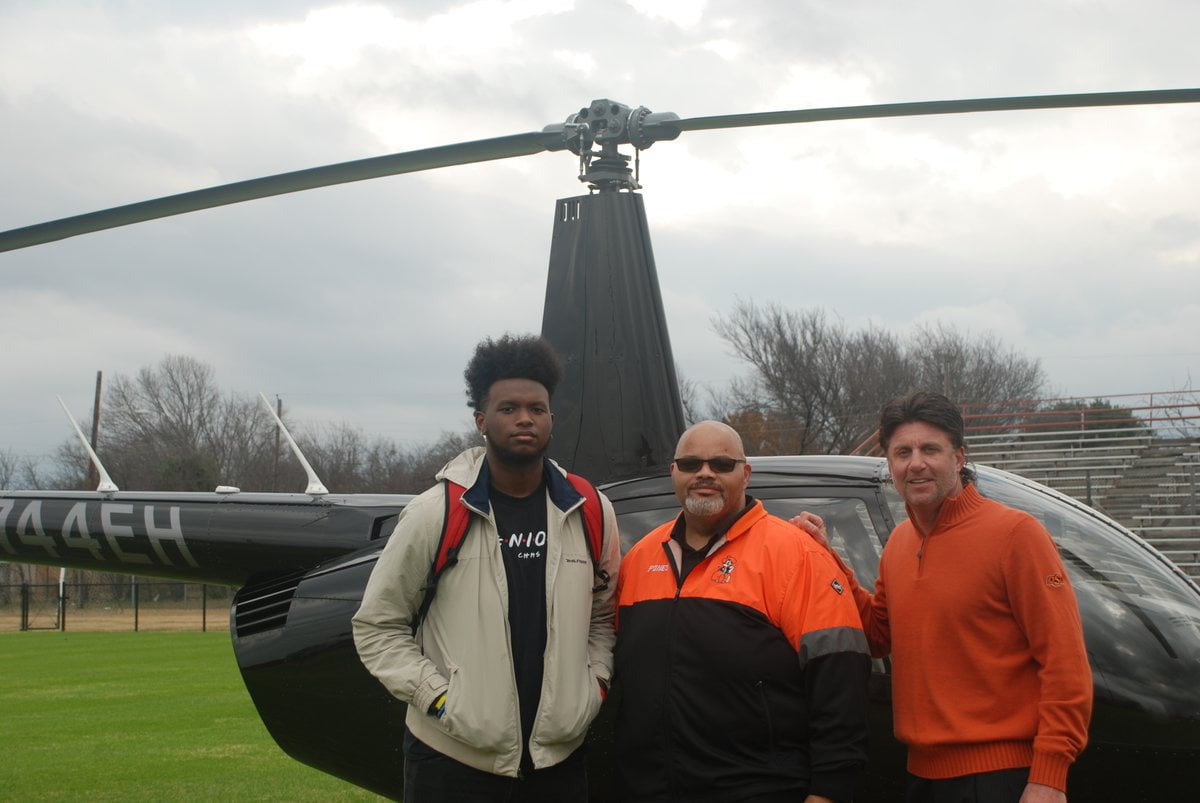 For the second straight year, Mike Gundy has been getting out to see prospective Cowboys by way of whirlybird. Last week, the mulleted-man dropped in on an in-state target LaRon Stokes. This week, he was out to see DL pledge Trace Ford.

Gundy was in the Dallas area to visit Midlothian product Langston Anderson. The four-star wideout from Heritage High School recently named OSU among his Top 5 schools. For this priority recruit, he made extra room in the chopper for OC Mike Yurcich and Anderson’s would-be position coach Kasey Dunn.

Gundy and OL coach Josh Henson stopped in to see three-star pledge Preston Wilson. The Argyle High offensive tackle committed to Oklahoma State in the summer and is one of four O-linemen expected to ink in orange during the early signing period later this month.

Big thanks to Coach Gundy and Coach Henson for stoping by today!! #GoPokes pic.twitter.com/Zctg6okx4u

There was also a stop in Colleyville to visit defensive end pledge Israel Isuman-Hundley who has been committed to Oklahoma State since May.

Good to see @CoachGundy today @CHHS_FOOTBALL checking in with @isrealoyahkilom Arrived in the chopper and got to meet some of @GCISD best as well as some OSU fame like @osunewell. Proud of Isreal and excited about his future with @Osufootball19 #PantherOn pic.twitter.com/dm1F8FIPxn

And a trip to the Austin area to see defensive tackle Xavier Ross, who also committed to OSU this past May.

The @CoachGundy landed at Cedar Hill High School today to meet with Longhorn football standout Xavier Ross and his dad. Academics + athletics = #CHISD,TheLeadingChoice! Apply to a school or program of choice at https://t.co/9Lhu6m9vY6. @Snowmanlearning @CHHS_Leader pic.twitter.com/m0G9zZlyWd

These visits served not only to get the 14th-year CEO some face time with several hard commits, but also to make a late push for a big-time wideout target in Anderson. Gundy would just love if all of the above would put pen to paper for the Pokes next Wednesday when the three-day early signing period begins.