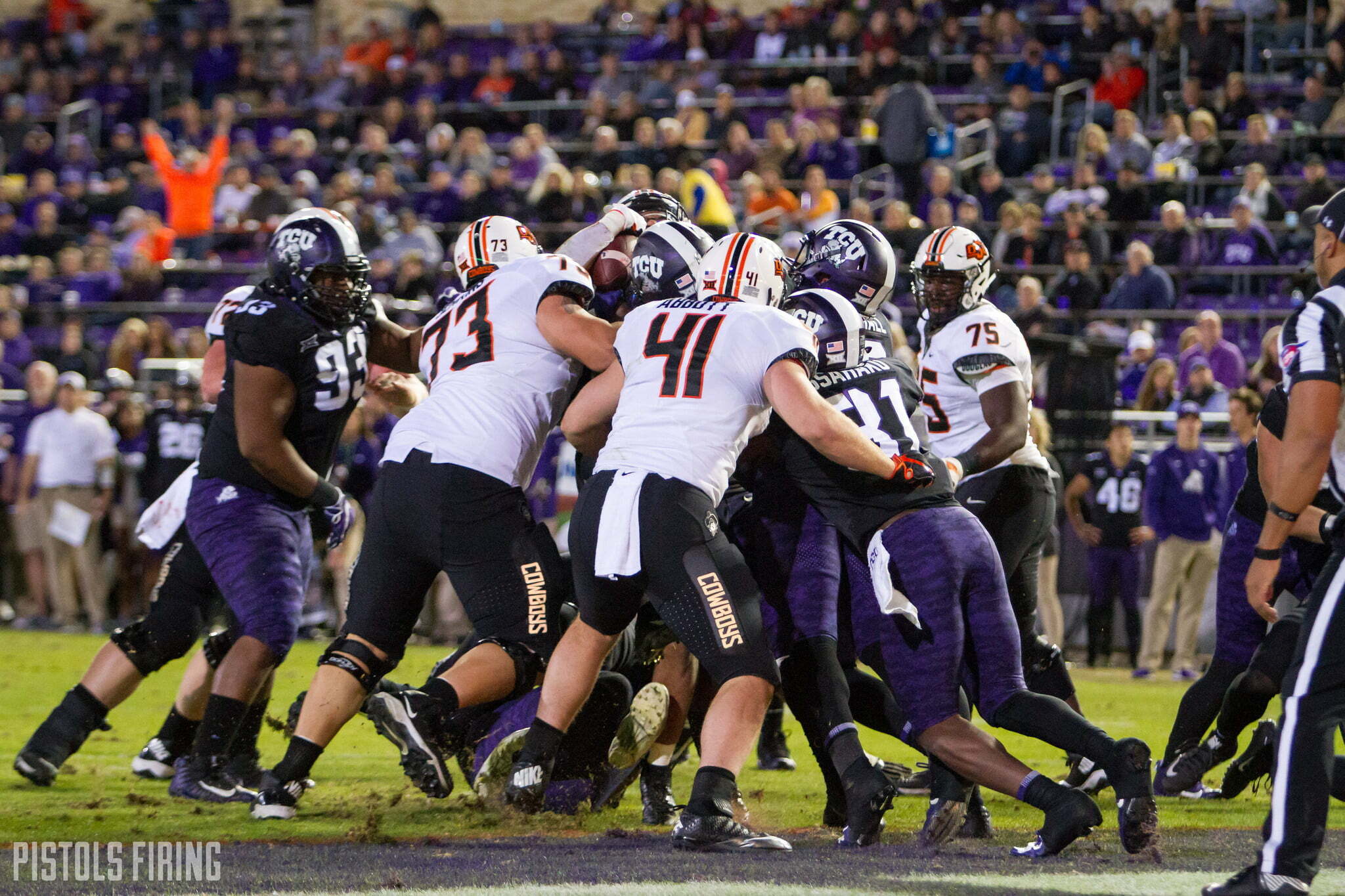 The next position group I’ll take a look at for the recruiting reset series is the offensive line. The Oklahoma State offensive line has had its share of ups and downs this season. Coming into the year, it was thought that this unit would be one of the strengths of this Cowboy team. However, even though there were times throughout the year that this group played really well, due to injuries and inconsistent play, the big men up front didn’t live up to preseason expectations.

Below I’ll dive into who’s leaving, who’s returning and what the 2019 recruiting class looks like in regards to the Oklahoma State offensive line.

The Pokes will lose three offensive linemen as they head in the 2019 season. Deionte Noel, Larry Williams and Shane Richards were all contributors this year. In addition, Richards and Williams were starters throughout a majority of the season.

Richards saw time at both guard and tackle, and although he showed issues in pass protection, he was a very talented run blocker and did a great job on defensive lineman, as well as moving to the second level to block linebackers.

Williams, who was in his sixth season of eligibility after the NCAA granted him a medical hardship waiver, had a solid season overall. Like Richards, he had miscues at times, but was mostly consistent for the Pokes in 2018.

Noel, who primarily played at guard this season in a backup role, will most likely be given the starting nod in the bowl game in place of Williams, who has decided to sit out. His departure will also reduce the depth at the center spot as he also saw some time at this position.

The Pokes are only losing three offensive lineman, so they return a lot of depth and experience at this position in 2019. Johnny Wilson, one of the Cowboys’ most talented overall linemen, will return at the starting center spot as will backup center Ry Schneider, who played very well when Wilson missed time due to injury.

In addition, All-Big 12 honorable mention honorees Marcus Keyes and Teven Jenkins will return to their starting positions on the OSU offensive line. Jenkins may be a preseason All Big-12 selection next year as he had a very impressive season and is, in my opinion, the best returning lineman on this Cowboy roster. He displays his blocking ability in pass protection in the play below (gif via Adam Lunt).

The Pokes also return left tackles Arlington Hambright (who went down with an injury early in the 2018 season) and Dylan Galloway, who were major contributors this year, along with backup Larry Joubert.

As I mentioned above, both Noel and Williams will be graduating, so the starting right guard spot will be open next season. Look for Schneider, who saw time at center this year, and Hunter Woodard to be two players in the running for that spot.

Additionally, youngsters Tyrese WIlliams and Bryce Bray may also crack the rotation in 2019 after redshirting this season.

The Cowboys currently have four offensive line commitments in the 2019 class, Cole Birmingham, Joe Michalski, Preston Wilson and Taylor Miterko. I’ll discuss each of these recruits in more detail below.

Birmingham, who is teammates with Oklahoma State’s top 2019 running back target Deondrick Glass, is an exciting prospect for the Pokes. He helped to lead one of the top rushing attacks in the state of Texas at Katy High School this past season. The Texas native primarily played tackle in high school, and although he has the skill to play other spots on the line, his size and strength make him capable of continuing to play tackle at the next level.

Birmingham has good footwork, makes great initial contact and then finishes his blocks, including driving his opponent into the ground, as you will see in his highlight video below. He excels as both a run and pass blocker and I could see him being a key component of the OSU offensive line in a few years.

Michalski was the first offensive lineman commit in 2019 for Oklahoma State. The Overland Park, Kansas-product is incredibly athletic and displayed this in his high school career on both the football and baseball fields. He moves very well for someone his size and has really quick feet and lateral movements.

You’ll see in his highlight video below that he does a good job of blocking at the second level of the defense and he’s not afraid to get physical. Michalski played both guard and tackle in high school, but I believe the Cowboy coaching staff sees him as a tackle in college.

Wilson has played both left and right tackle for Agyle High School, however, it looks as though the Pokes will be looking for him to move to the center spot. The Texas native is very quick off the line of scrimmage and has athleticism to handle smaller, faster pass rushers and well as bigger defensive linemen.

In addition, he does really well as a run blocker, and his speed allows him to quickly set the edge for his running back. If he does move to center, he will have a great mentor in Johnny Wilson playing in front of him.

Miterko is another athletic and flexible offensive lineman. He is also very physical and looks for the pancake block when he can. I think he’s another lineman that will fit in very well to Oklahoma State’s style of offense.

There are several offensive lineman that Oklahoma State has offered which haven’t yet committed, however I don’t think any of those guys land in Stillwater. The Pokes are in a pretty good spot numbers wise when it comes to the line, and they are replacing all three players that left with these commitments.