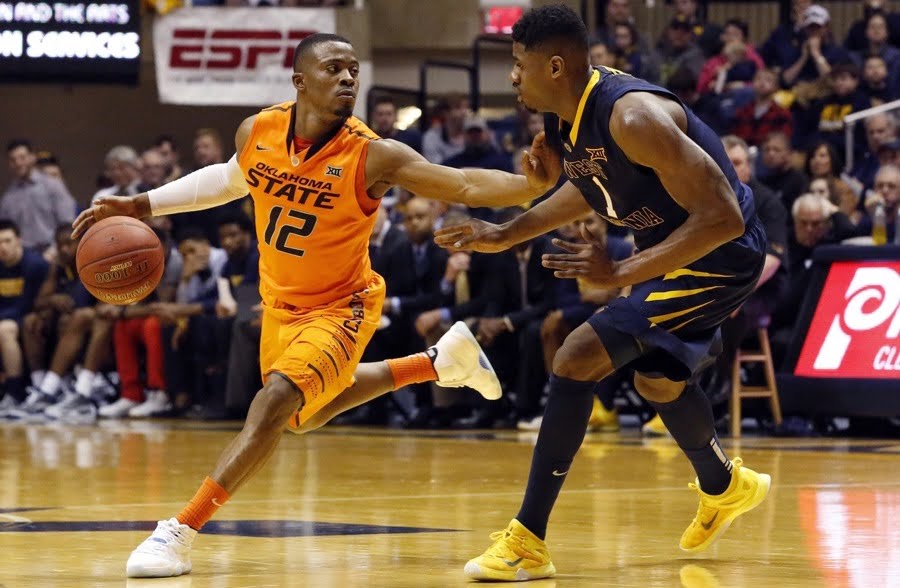 Anthony Hickey will try to get OSU’s first NCAA Tournament win since 2009. (USATSI)

I failed to offer up my thoughts on the NCAA tournament, OSU’s chances and some general thoughts on the best month of sports all year last weekend after the brackets were announced.

• As I was filling out my bracket last night, I realized I hadn’t even looked at who else was in OSU’s region because I hand’t given any real thought to us getting past the first weekend. The Travis Ford Era, ladies and gentlemen!

• The OSU-Oregon game opened with the Cowboys favored by 1.5. It’s now a pick ’em. I don’t promote gambling, but……

• Speaking of Ford, he’s going to regret all this pre-tournament posturing after OSU gets bounced in the first round for the third straight season.

Then he starts talking about how the “normal fan” thinks.

Ford thinks the "normal fan" is a moron. We'd just like to see the first weekend, Travis! http://t.co/gTFTzrFc5A pic.twitter.com/NDPr7TdWJl

The only thing I’m lead to believe that Travis Ford actually thinks I’m a moron and don’t understand how success in college basketball works.

So yeah, after OSU is bounced and I write my third straight eulogy on his career in Stillwater, he’s going to wish he hadn’t said a lot of that stuff.

• For clarification: best sports month of the year is Monday of this week through Masters Sunday.

• Here’s our annual NCAA tournament player draft. Or, as Nolan and I call it, “the post that takes three days to make that gets less traffic than Mike Gundy just staring into a camera and not saying anything for five minutes” post.[1. Ok, I just made that up. But we call it something similar.]

• I’m bummed Arizona and Wisconsin are in the same bracket. I would have picked them both into the Final Four or even into the title game if they were in different brackets.

So this is, in theory, the worst team OSU has played in the first round in three years. It’s also probably the worst of the three OSU teams. Or the one with the least talent.

• Here’s the offensive/defensive efficiency of everyone in the West Region. Oregon and Oklahoma State are pretty closely matched which means Oregon by 15!

• If OSU plays Wisconsin in the second round and No. 13 get his groove back, Wisconsin fans are going to be drooling over the Phil Forte Experience. “How did this kid slip through our recruiting tentacles? He is perfect in every way!”

• I am a bit nervous about one thing. I planned a vacation with my wife for next weekend a while back thinking it was Final Four weekend and I didn’t have anything to worry about regarding OSU.

I shouldn’t have to worry about us getting by Oregon AND Wisconsin but there’s a little sliver of me that is still a bit edgy about it. What if the hoops gods gift-wrap two wins because of all of Ford’s turmoil in the Dance over the last five years?

I asked Mrs. Pistols this question on Wednesday. Her response (and it was ice cold): “You hire it out.”

• Doug Gottlieb clowning Seth Davis’ knowledge of college hoops has become a tradition unlike any other in my home.

OSU vs Oregon. Loser has to wear one uniform for a whole football season.

Travis Ford better get it together. 1-and-done w/ the talent on this team would be hot seat material given his salary, 1 NCAA win in 5 years

• I was watching Warriors-Hawks late last night and ESPN started showing highlights of Steph from his Davidson days. I almost came out of my seat thinking about how he almost single-handedly beat Kansas to get to the Final Four.

I’ve written about how Mrs. Pistols might be able to thank Curry for saving our relationship before, but it’s always worth another mention during March.

Some of my favorite sports memories (a lot of them, actually) have to do with the tournament. I was homeschooled so I was always home for those Thursday/Friday games growing up and I watched every second.

Bryce Drew diving onto the floor in OKC, the Hampton coach kick and screaming after taking down Iowa State, Sorrentine from the parking lot, the whole thing.

I could go on a lot longer than that. Crawford vs. Pullen, Curry’s magic, Wally Szczerbiak taking the Sports Illustrated cover during Miami’s run in the late 90s.

It’s all so wonderful and we haven’t even talked about OSU yet.

The 1995 Final Four run. I still have the t-shirt my dad got me from Seattle. The 2000 Florida game might have been the last time I cried about sports. I went to the 2004 Final Four when I was a freshman in college, met my future roommates there.

The point is, college basketball kind of stinks for four straight months of the year. There’s a reason none of us know the names of the dudes we’re drafting in our NCAA tournament player draft.

There’s also a reason none of that matters for the next three weeks. Superstars will emerge, coaches will earn contracts they don’t deserve and, most importantly, some No. 13 seed will have you prostrate in your living room even though you can’t even name its mascot, much less any of its players.

That’a March Madness to me.

That, and Steph Curry spinning reverse layups (Gus’ laughter at 0:30 is amazing).