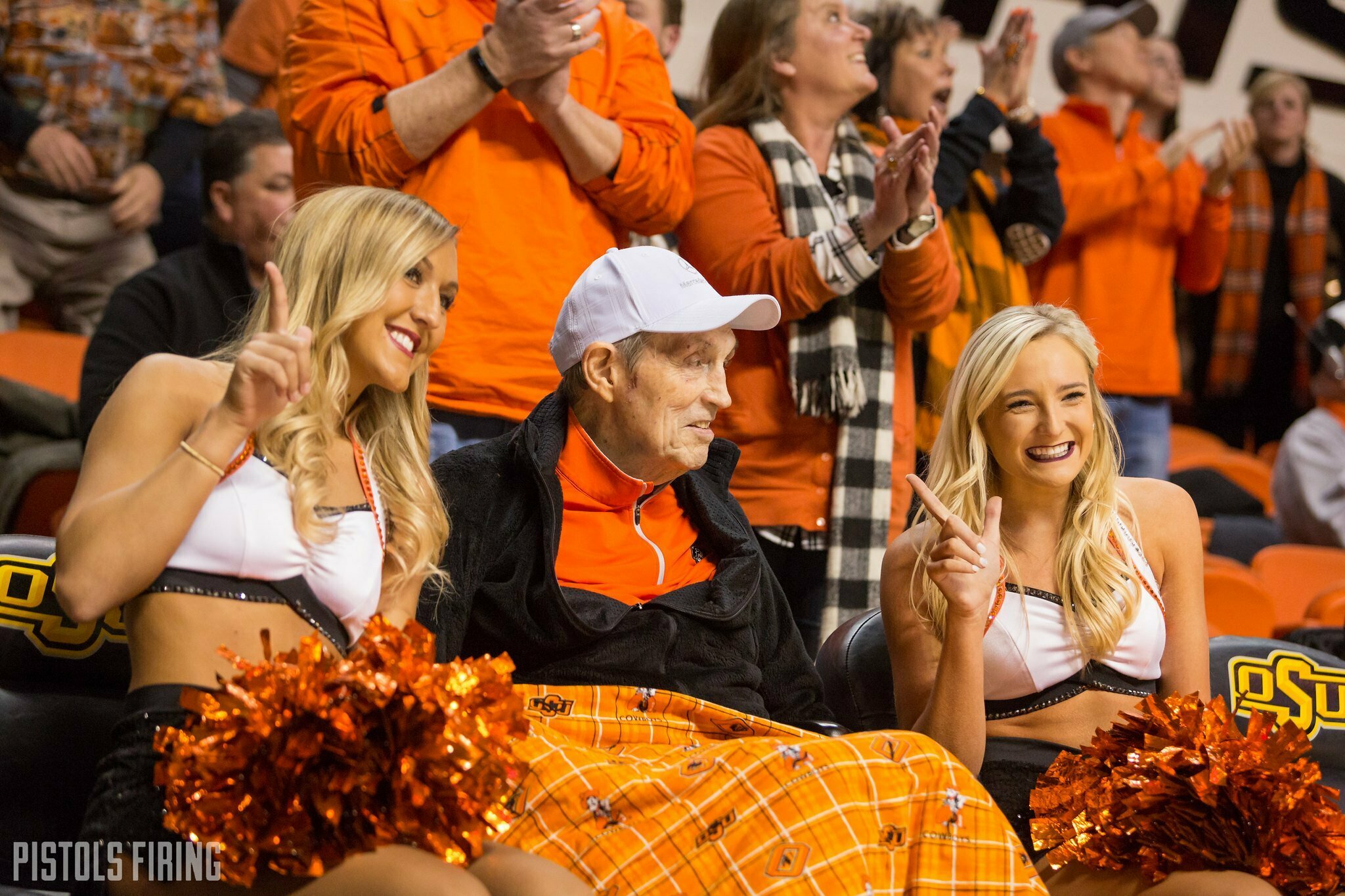 It’s hard to know what to write about someone that you’ve revered so much, for so long. That’s where I found myself following the passing of Eddie Sutton.

As Kyle Porter masterfully laid out, Eddie was a father figure to both his players and to the rest of us. And just like Kyle Boone wrote, Eddie was synonymous with Oklahoma State. Both sentiments ring true and each piece struck a chord with me.

Many others have shared their thoughts and memories of the iconic head coach, including a few of those players, so I won’t assume to be able to add anything too insightful or profound. I can only share my own experience and what it meant to have someone like Eddie occupying that space during my formative years — and something he helped teach me years later.

I was 6 years old when Sutton coached his first game at his alma mater, which is to say I have no memory of it. I just remember Eddie being the face of the school when I became aware of it shortly thereafter.

Eddie was one of a kind, but he seemed to represent all of us. It was that slow, yet matter-of-fact Midwestern draw I heard during so many interviews and that same intonation — with a slightly lighter tone and a bit more humor — coming through the car speakers during his postgame radio shows and across the air during the Eddie Sutton Show.

It was the scowl he wore when another team went on a run. My mom is the reason I grew up an OSU fan, despite my dad and brother bleeding crimson. She always said that Eddie looked like a bulldog as he grimaced and paced the sideline.

It was more than a persona or his no-nonsense approach, his teams were good, damn good. In his 16 years at Oklahoma State, he never had a losing season.

I was consumed by Oklahoma State basketball because it was the level of program that warranted it, and Eddie was its emblem.

But my strongest memories of OSU and Eddie were tied to his games against OU. Our family dynamic made for some fun and (more often) contentious Bedlam viewings, especially between my brother and I.

During Eddie’s tenure, OSU went 19-15 against the Sooners, a fact I never neglected to remind my brother of. But the two of us didn’t really start keeping score until Kelvin Sampson’s hiring at OU in 1994. We were 10.

So, I should mention that I hated Kelvin Sampson. I hated him because he made OU good at basketball, and I hated him even more when his teams beat Eddie’s.

The first time Sampson’s Sooners hosted Eddie’s Pokes, they pulled out an overtime win in the ranked-on-ranked dogfight. That was one of only three losses by the Pokes post-Valentine’s Day 1995. The other two were to No. 3 Kansas in Allen Fieldhouse and to No. 1 UCLA in the Final Four.

Names like Ryan Minor, Eduardo Najera and Hollis Price were the villains to my superheros like Adrian Peterson, Desmond Mason and Tony Allen. My 36-year-old self can now admit that those were just two really good programs during that span that brought it against each other each and every time.

These games were normally close and were always filled to the brim with the good kind of bad blood. In 26 meetings over their dozen congruent seasons, Sutton held a 14-12 record, but the Cowboys’ scoring margin across that entire span was just plus-1.6 points on average.

The rivalry was almost as contested on the court as it was contentious in our living room. Barn-burners on the boob tube, turned into brotherly brawls in the living room followed by trash-talking in the driveway under the basketball hoop, and sometimes hurt feelings for days.

But the way you think about things when you’re 12 is not the way you view them at 22 or 32. Or at least it shouldn’t be. That’s why when the news of Eddie’s passing broke last Saturday night, one of the first things I thought about was the last time Sampson was in Stillwater.

Two years ago when his Houston Cougars came to town, Sampson was reunited with his former Bedlam rival and the scene will remain in my memory for a long time. Sampson walked over to Sutton spoke briefly with his former counterpart, kissed and embraced him.

His postgame summation of the meeting is still a tearjerker.

All ill content faded instantly, and I saw a man of significant stature leveled by the state of his former rival. There was nothing but mutual respect and adoration between two dueling program figureheads who I childishly viewed as mortal enemies. Of course that was never the case which should have been obvious a long time ago.

We lost a great man and coach today. So much respect for all he gave the game. RIP Coach Sutton pic.twitter.com/uwVHJo4cmc

Life is precious, and it’s more valuable than sports, which is an awesome and fun thing that can turn silly and divisive. You can throw in politics or anything else that can be useful but for which we betray values of human decency.

That’s what I think about when I think of Eddie. He was as competitive as could be, but from all accounts was a consummate pro that treated the lowest-level member of the athletic department as if they were a star player, and treated them all like family.

I also think about my daughter, who is now also 6, and the fact that she likely won’t have a sports figure (or any outside figure) play that exact role for her. While it’s still unclear how big a space sports will occupy in her life over the next 16 years, I have a hard time imagining that anyone could do for her what Eddie did for me.