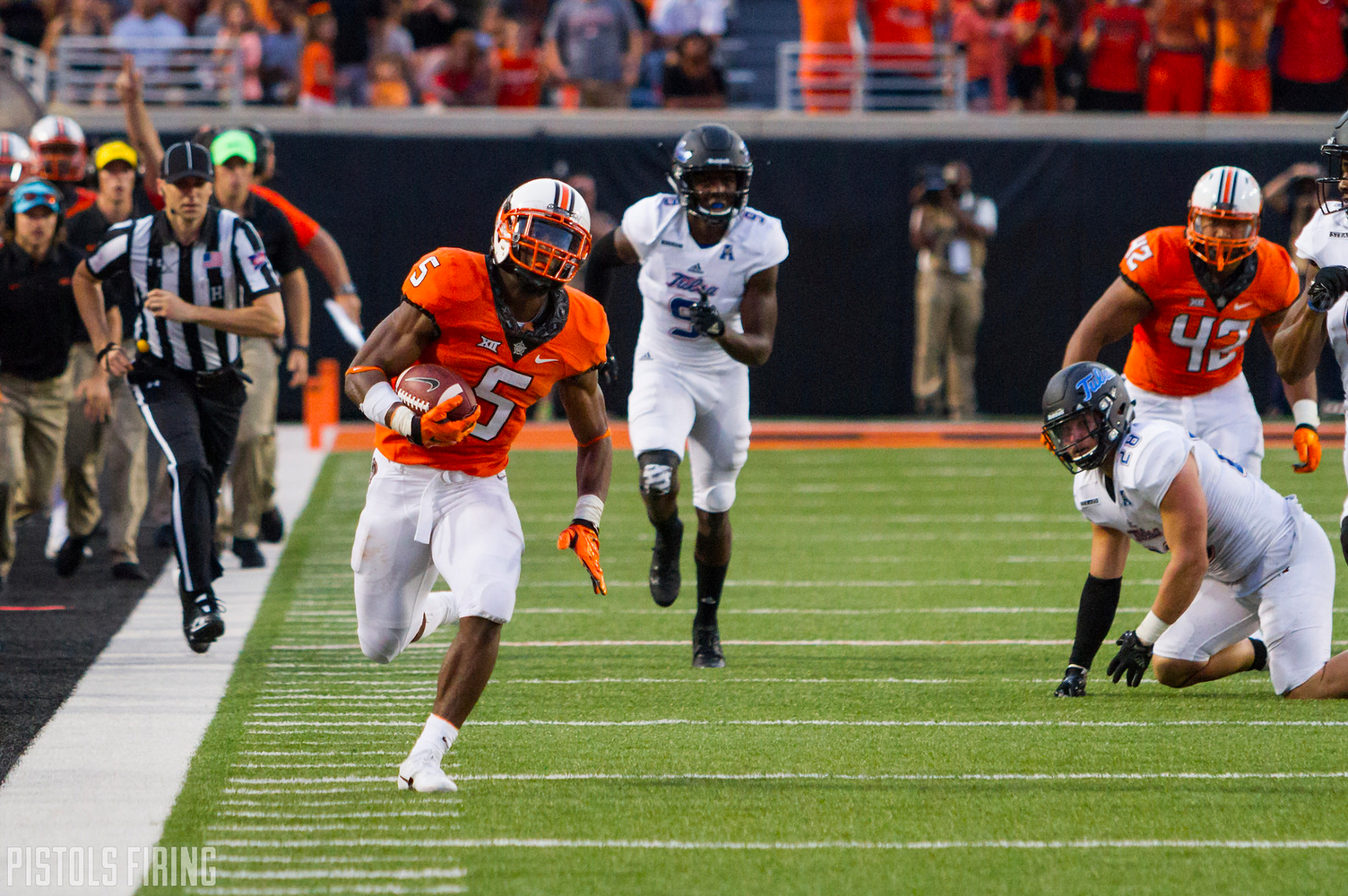 Oklahoma State torched the Tulsa Golden Hurricane on Thursday evening in Stillwater 59-24 in a game that was far from ever being in doubt. The Pokes hit the accelerator early and often, racking up nearly 500 yards of total offense by halftime as Tyron Johnson made good on his tweets and grabbed bag No. 1 in dramatic fashion on the first drive.

Mason Rudolph, James Washington and Justice Hill looked more like All-Americans than All-Big 12 players, and the entire 30 minutes made me weak at the knees. One of our writers said he was skipping the second half to look for flights to Pasadena in late December.

The second half was what first game second halfs should be — boring and methodical. OSU scored three more touchdowns and put Tulsa to sleep as the neon palms revved up for a few customers looking to celebrate the first of what should be many, many wins this year.

The only way Thursday evening could have gone any better is if Baker Mayfield declared on Twitter at halftime that he was going to forego his senior year to protect his ribs for the NFL.

On to the thoughts.

There are fast offenses. There are hurry-up offenses. Then there is what Oklahoma State did in the first half on Thursday night in Stillwater. The Pokes made Elon Musk’s hyperloop look like slow motion as they ran six plays in the first minute and only took 12:12 to run 36 plays and score 38 points. That’s about 20 seconds a play which is absolute lightning (anything under 20 is borderline historic). I was concerned Mike & Mike would bust out the Mitt Romney playbook and try to bleed Tulsa out, but it’s clear they’re confident and excited about their treasure chest on O.

2. Tyron Johnson is a superfreak

I don’t play fantasy football (which Carson makes fun of me for because of course), but I do play in a fantasy Oklahoma State league where 12 of us all get to draft a non-QB and rack up points based on what they do statistically. I had the third pick this week, and I knew 28 and 5 would be gone. I took Tyron because I was scared he was going to have like 900 all-purpose yards, and I was going to be stuck with Tre Flowers or something.

All that to say, I was very pleased with how the opening drive went. Tyron saw more passes in that sequence than he saw in his career at LSU! The catch he made was a joke, too. Over the top with a Tulsa defender’s hand in his collar? 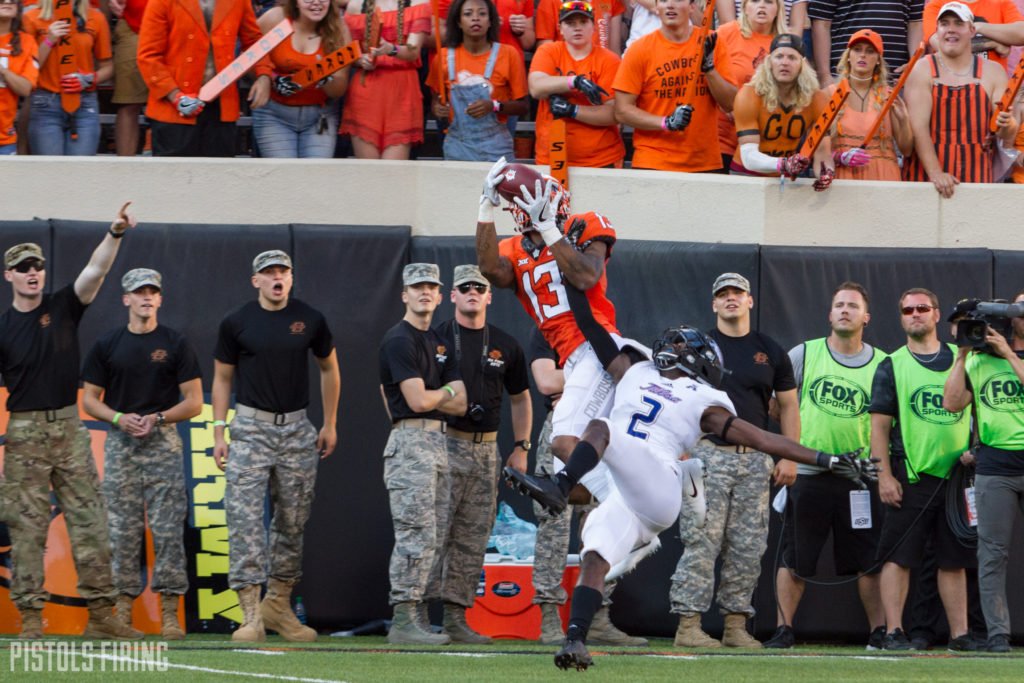 He is definitely at some point this year going to try and run sideline to sideline like Seneca Wallace and get gang-tackled by 10 defenders — because this is what swag does — but it will all be worth it.

Side note: TJ won the next 40 consecutive uni Heismans in Stillwater as soon as he took the field on Thursday. When is the IPO? Bag year, baby. I’m here for it.

And they all felt easy. King was barely even breathed on during his gallop.

This doesn’t even include LD Brown’s 73-yard run. Again, let’s not pretend like Tulsa didn’t win 10 games last year. This wasn’t Southeastern Louisiana rolling around with the Oil Baron running up and down the field. Tulsa is good! Or at least above average!

Also, I’m not saying this offense is going to be as good as that record-setting 2011 one that scored 633 points, but after four quarters, I am saying it’s a possibility. While we’re here, has anybody ever made 145 yards and two TDs look easier than James Washington made it look on Thursday night?

The most eye-opening part of Thursday’s game for me was how fast Oklahoma State is on defense. Maybe that looks different against Texas or West Virginia — it probably does — but the Kenneth Edison-McGruder-Calvin Bundage combo at linebacker is immense.

I thought the corners played well, although they went mostly untested, and the Ramon-Flowers combo at safety was outstanding.

This was just one play, but OSU’s coverage (while the game was close) was mostly like this all night. We’ll know more in a month, but thumbs up on the secondary after 60 minutes. 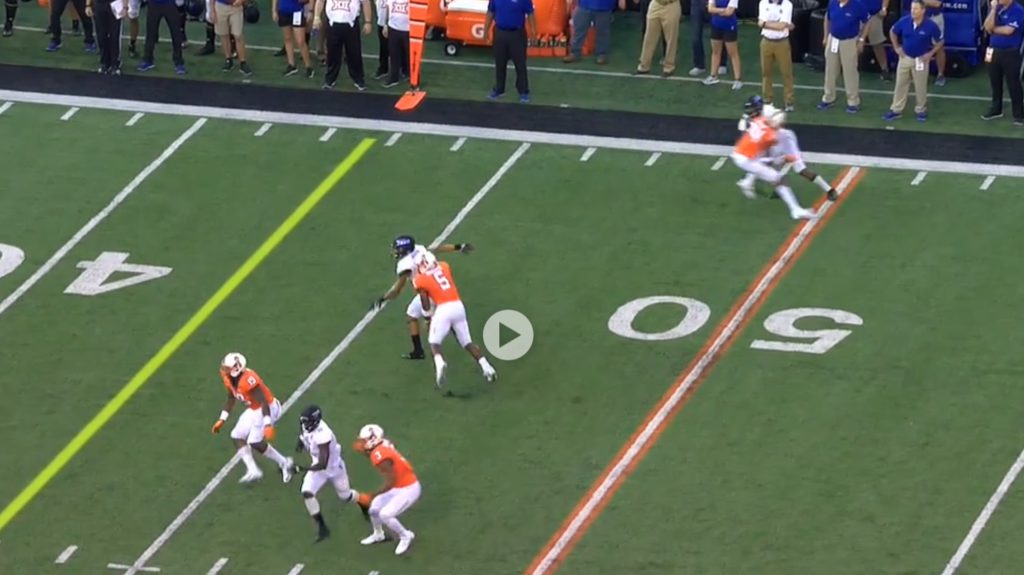 The corners just seem bigger, faster and taller than before. Again, take this with more salt than the Dead Sea because Tulsa’s President seemed more like a low-level mayor than anything else, but Gundy also seemed pleased with his defense after the game.

Of all the defenders, Ramon especially stood out to me. We all thought his move to safety would be about him nabbing more picks, but his anticipation and intelligence from that position was incredible. He can sense and watch plays unfold multiple moves before they actually unfold, and you can see it in his reaction time.

We're learning a lot more tonight about Oklahoma State's defense than its offense.

5. Defensive line got better as the game went on

In the first half, Oklahoma State’s line seemed about as disruptive against the pass as me after a tryptophan-laced Thanksgiving lunch. I’m exaggerating that, of course, but when you compare it to what happened at the end of the game, it was just … average (or ave-ruge if you’re Mike Gundy).

The upshot with this line which runs a legit two-deep at every slot is that they’re going to overwhelm the Tulsas (and Texas Techs and Iowa States) of the world by the time the last 15 minutes roll around. That might not shine through until late in the third or the fourth, but in those long, exhausting Big 12 games, they’ll prevail in a way that won’t be evident early on.

It’s not an overwhelming front four (or three) in the way that Florida or Alabama is overwhelming. But it’s perfectly constructed for Big 12 play — lean, fast and deep. They also played the run quite well. Tulsa’s star RB — D’Angelo Brewer — had 22 carries for 33 yards.

At halftime of this game, FOX’s Robert Smith said something like “OSU needs to get a lot better defensively to have a chance to make the CFP.” OK. They gave up 14 points to Tulsa, and seven of those were meaningless. Plus, giving up points is sort of just the nature of the thing in the Big 12.

I actually thought OSU did what it wanted to do on defense for the most part (other than Tulsa’s third-down conversions). It kept teams in front of them, got turnovers and didn’t give up many big plays (only 11 plays of 10+ yards and only four of over 20).

Smith also mentioned more disruption on the QB to force turnovers — which he’s right about — and actually happened in the second half.

Earlier this week, I bemoaned wide receiver depth as being overrated and not as important as people think. My points stand, but it was evident on Thursday that Oklahoma State’s wide receiver depth (because it is preposterously good five guys deep) is going to create a lot of problems in terms of matchups.

Thomas Fleming will be able to break this down schematically better than I can, but picking between covering Tyron and Ateman with two guys is like picking between OU and being homeschooled in college. Neither one is appealing.

And we haven’t even mentioned James Washington!

So while I’m going to ride with my original point because I think WR depth is generally overrated, this year’s OSU team might be a special case.

Oh, and our President was better than theirs.

Gundy was not pleased after the game, and he shouldn’t have been. The McCleskey fumble was comically bad — he definitely knows better than that — and the Rudolph fumble was about him getting outside of that Heisman-shaped box and trying to be Aaron Rodgers.

OSU can afford to turn the ball over against most teams — Tulsa definitely included — but one of the pillars upon which this specific team has been built is ball protection (12th in the country last year and 17th the year before that). That needn’t go away just because they have enough firepower on offense for Rob Glass to carry around a nuclear football during games.

8. The Offensive Line is Back?

I don’t want to make any definitive declarations after Tulsa, but considering what we saw from the OL in the second half of last season paired with this game, I don’t think this is a very thin limb to climb out on.

Tonight marked just the second game of the Mike Gundy era in which his team averaged over 10 yards per play (2008 against Iowa State was the other one) and just the third in which it averaged over nine yards per carry (2011 Baylor and 2012 Savannah State).

We torch the hogs when things go poorly and praise the backs when they thrive. Yes, the running backs are great, but let’s not forget about the 757 Dreamliner-sized holes they were dancing through.

He has made The Leap. He had 132 yards on 15 carries plus three catches for 10 yards and looked like Joe Mixon (on the field) in the process. I watched this video 15 times at halftime. This is “wait, is he one of the best players in the country?” stuff!

Hill bouncing to the outside after hitting a roadblock up the middle is my new drug of choice.

Well, we got what we wanted. Oklahoma State is now 17-8 as a top 10 team under Gundy, and it thumped Tulsa as resoundingly as it possibly could have. At times, it felt like the offense was not even out-executing Tulsa’s defense. It felt as if they were simply that much better. Like me and my friends playing tackle football in the backyard against my three-year-old and four-year-old.

It honestly felt like Tulsa was only playing with nine defenders for most of the first half. I guess that’s what happens when there are that many options and so many of them are devastating.

We knew coming in this game wouldn’t tell us a ton in the big picture. But we also knew deep down that it was a real opportunity for Oklahoma State to make a statement. That the preseason hype was real. That the postseason goal was real. That this team was every bit as good as that one in 2011 that tasted three drops of destiny before spitting the bit late in the race.

And in front of 56,000 fans on Thursday night in Stillwater as its fearless leader wore shades wrapped around a $1 million mullet well after the sun had set, Oklahoma State looked like one of the best teams in the country and maybe the best in school history. Seasons like this don’t come around all that often for Oklahoma State, and Rudolph and Co. played like they knew it.