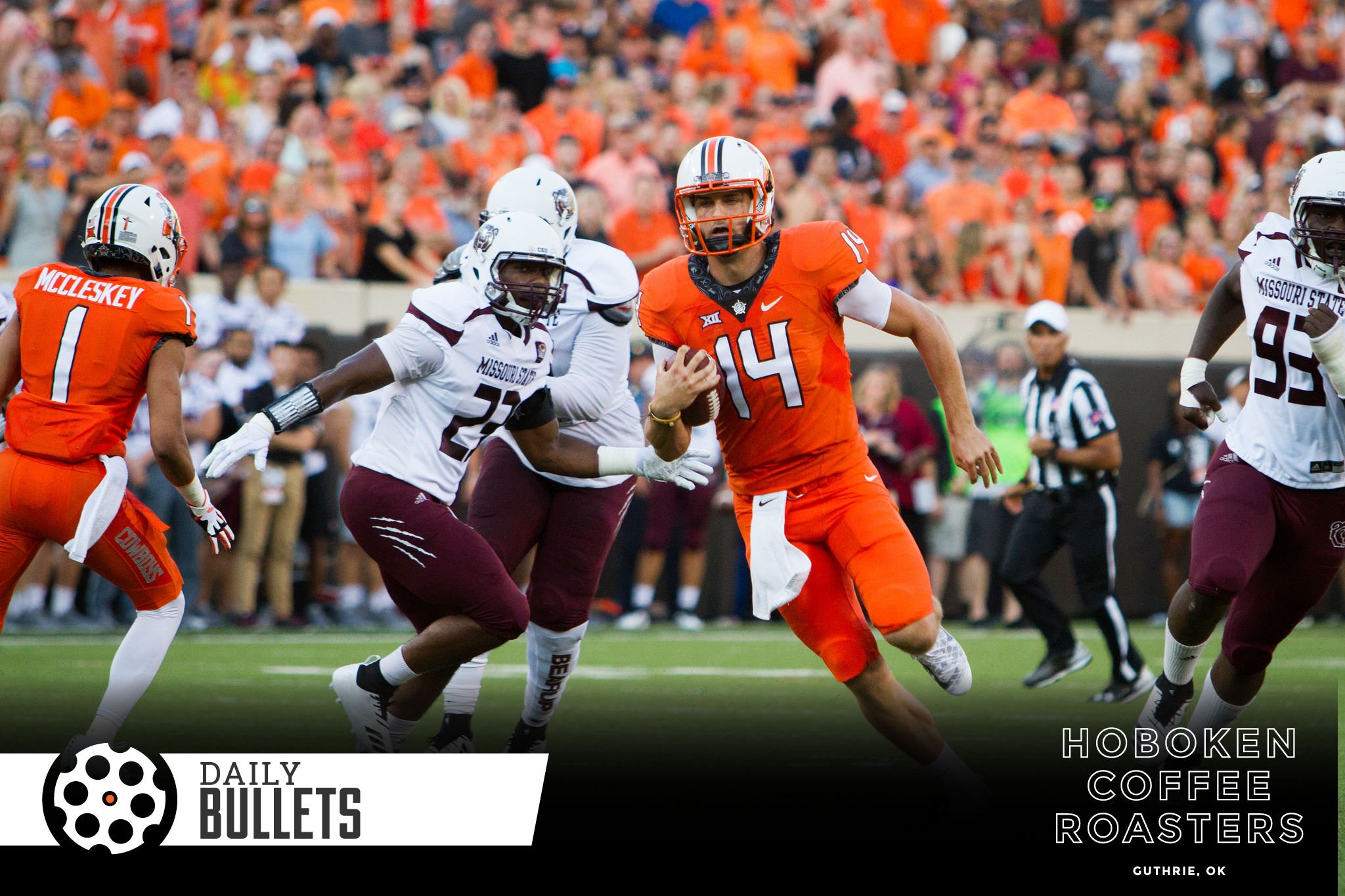 I’m on the shelf today typing my flu game with waves of nausea bedside, let’s all let Signing Day cheer our hearts this holiday season.

Also, please share with your loved ones (not really), the “Wet/Sticky Bandits” appear to be on the loose.

**WARNING!!**
these 2 men are going around local neighborhoods knocking on doors claiming to be from a plumbing & heating company and asking for entry to your home to check your taps for possible leaks! DO NOT let them in, they ARE NOT plumbers! PLEASE SHARE. THEY ARE DANGEROUS!! pic.twitter.com/r7gvMxG0VR

KB’s got the pulse on an important five-star decision today for a running back from Florida – and how it impacts the Pokes and their efforts.

It’s rare that a five-star commitment may impact Oklahoma State. And while the commitment of top-5 player Trey Sanders, a running back from IMG Academy, doesn’t impact OSU directly, it does so majorly in an indirect way.

Sanders is expected to pick Bama when he makes his commitment on ESPNU on Wednesday. If he does, it likely — but not certainly — will take the second and potentially final running back scholarship for the Tide in the 2019 class, leaving four-star Deondrick Glass, an OSU target favoring Alabama, with no choice but to look elsewhere. [PFB]

So if Trey Sanders goes Bama, we’ve got a better shot at a four-star running back. Roll Tide.

The thought of Taylor Cornelius legacy will surely be a debated one but Mike Gundy puts his finger on something divisive here.

“Gosh, I don’t know. I think they (fans) make their own decision on that, I think he should be looked at as a young man that made a commitment to this organization,” Gundy continued on his thoughts on Cornelius. “He’s run up over 3,400-yards passing and has been very competitive. He has played well in most of the games. I’m sure he would like to have the TCU and the Kansas State games back, but that is not uncommon for quarterbacks at this level.

In a 13 game season they might have two or three games that they don’t play well in. That’s probably the way that he feels, but I have a lot of respect for him for what he stands for and the way he competes. [GoPokes]

Emphasis mine – I think this is where your feelings on Cornelius may turn. There’s a value, potentially culturally if Gundy’s emphasizing, on loyalty. Do you give him more leash because he stuck around or do frequent Training Table-points not mean a lot to you?

Two things are true: it’s easy to like Cornelius for being loyal-and-true and the NCAA doesn’t add bonus points for playing guys who stayed loyal to the program.

Fascinating look at 2018 recruiting what if’s (to start your signing day right)…..Late D-Line add for 2019 pulled a Bobik (two-year mission) and will come in more mature at 22….Ohio State vetted Bobby Stoops for their short-lived opening….An interesting CFB recruiting theory – the Pareto Principle (OSU doesn’t fair better)….I want no part of Justin Fields in Norman but it makes too much sense

Pokes continue to be one the most selective teams on the recruiting trail:

How many offers have Power 5 schools made for the 2019 recruiting class? The total offer counts as of this weekend, according to 247. pic.twitter.com/cKJaJaVjUs

Not an @TheAthleticCFB subscriber? We've got a $2.99/mo. promotion right now. https://t.co/zjHUL9psOHhttps://t.co/pFcNrQTDse

We’ll need to see a lot more of this (transition buckets, Curtis Jones scoring) for the season to go well.