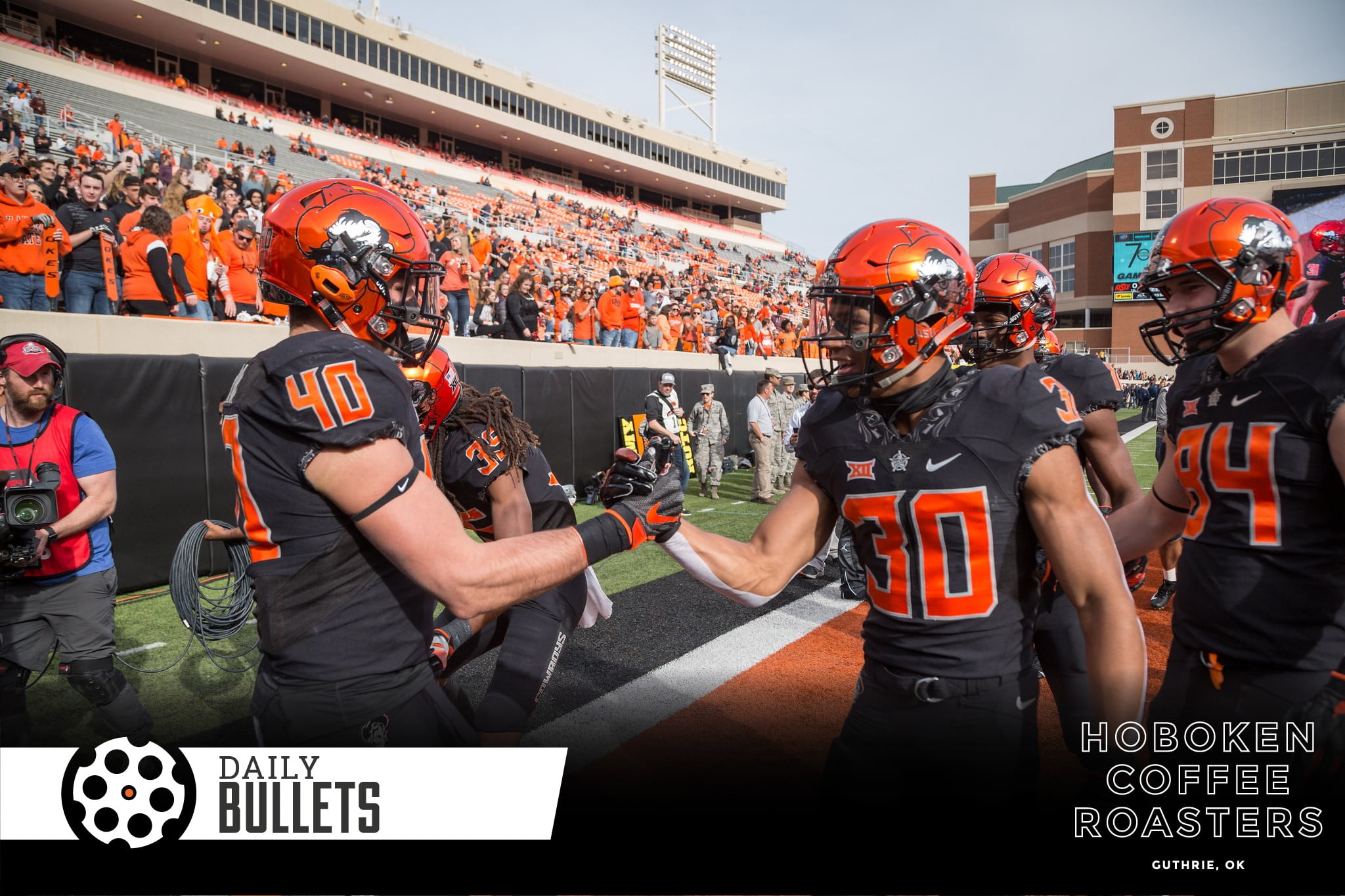 Happy 4th of July – no reason we can’t be celebrating for another 244 years.

• Mike Gundy is in a real pickle.

Gundy has made an incredible living as a successful head coach building a program, building a culture, empowering and hiring coaches and staffers to embody his idea of what makes a successful football program.

15 years in and you hit a snag. Culturally, the way you relate (or don’t) is no longer acceptable. Berry Tramel says it’s hard to teach an old dog a new trick but he’s got the opportunity. Kyle Boone says it’s an opportunity to turn up the recruiting. It’s an opportunity to rise to the challenges of a new generation or ride of into the sunset.

• This was a compelling argument made by Jenni Carlson – some school needs to hire Sean Sutton to be a head coach.

I don’t know if Sean Sutton will be a head coach again. Maybe he doesn’t want to go that route. Perhaps he prefers teaching in the wings and planning behind the scenes while someone else handles the limelight. But surely a college somewhere — might have to be a small one to start with — would be lucky to have Sean Sutton as head coach.

He deserves a shot. [NewsOK]

• TulsaWorld’s Guerin Emig talks through the pros and cons of OSU, OU, and Tulsa in the same conference (stemming from the SI piece on fictional realignment) – the biggest hurdle to me is TV revenue with a diluted product

• The new fun aspect of Cowboy Basketball (other than watching Cade dice up defenses) will be watching these three guys play defense on the perimeter.

To me, this might be the most fun group to watch. Cunningham, (Isaac) Likekele and Keylan Boone are all matchup nightmares on the perimeter, especially defensively. If a team has two guards who are 6-2 or shorter, good luck not getting engulfed by that group. [PFB]

• Viktor Hovland is climbing the charts of successful professional Cowboys and the most likable. This quote on how he’s getting between tour stops is both textbook introvert and hilarious.

“I probably drank like six Red Bulls through the night going to Hilton Head, but I usually just listen to Joe Rogan podcasts, and I listen to podcasts with a guy named Sam Harris called The Making Sense podcasts,” Hovland said. “I just listen to a bunch of metal music, that also keeps me awake.” [Golfweek]

• As much flack as Gundy appears to be getting, former Cowboy coach Joe Deforest (and current NC State safeties coach) says there’s a relevance he’s able to maintain. Not the easiest thing to do!

“Mike’s got a special personality, as we all know,” DeForest said. “I think the kids feed off of Mike and he feeds off the kids. He stays young and he stays in the kids’ view of a young guy who likes to dance and likes to have a mullet and all those things. I think that’s part of Mike’s big success. It’s his relatability to the kids.

• If you were Mike Gundy with tens of millions of dollars, would it be worth it to you to come back and work through the challenges of the job?

• No. 2: Solid reader thoughts on a recruiting move that would help the Pokes

• No. 3: Observations from the Eddie documentary

• No. 4: Pokes land a juco big in Bernard Kouma

• No. 5: Five things to watch in the Eddie documentary

• Do you have what it takes to be a master auctioneer?
• This NYT review of books on walking resonates – the older I get (or the more I experience a pandemic, right?) I like the experience/effects of walking

This James Clear quote resonated with me – especially the concept of reading for understanding.

“What is the real goal?

The real goal is not to “beat the market.” The goal is to build wealth.

The real goal is not to read more books. The goal is to understand what you read.

Don’t let a proxy become the target. Don’t optimize for the wrong outcome.”