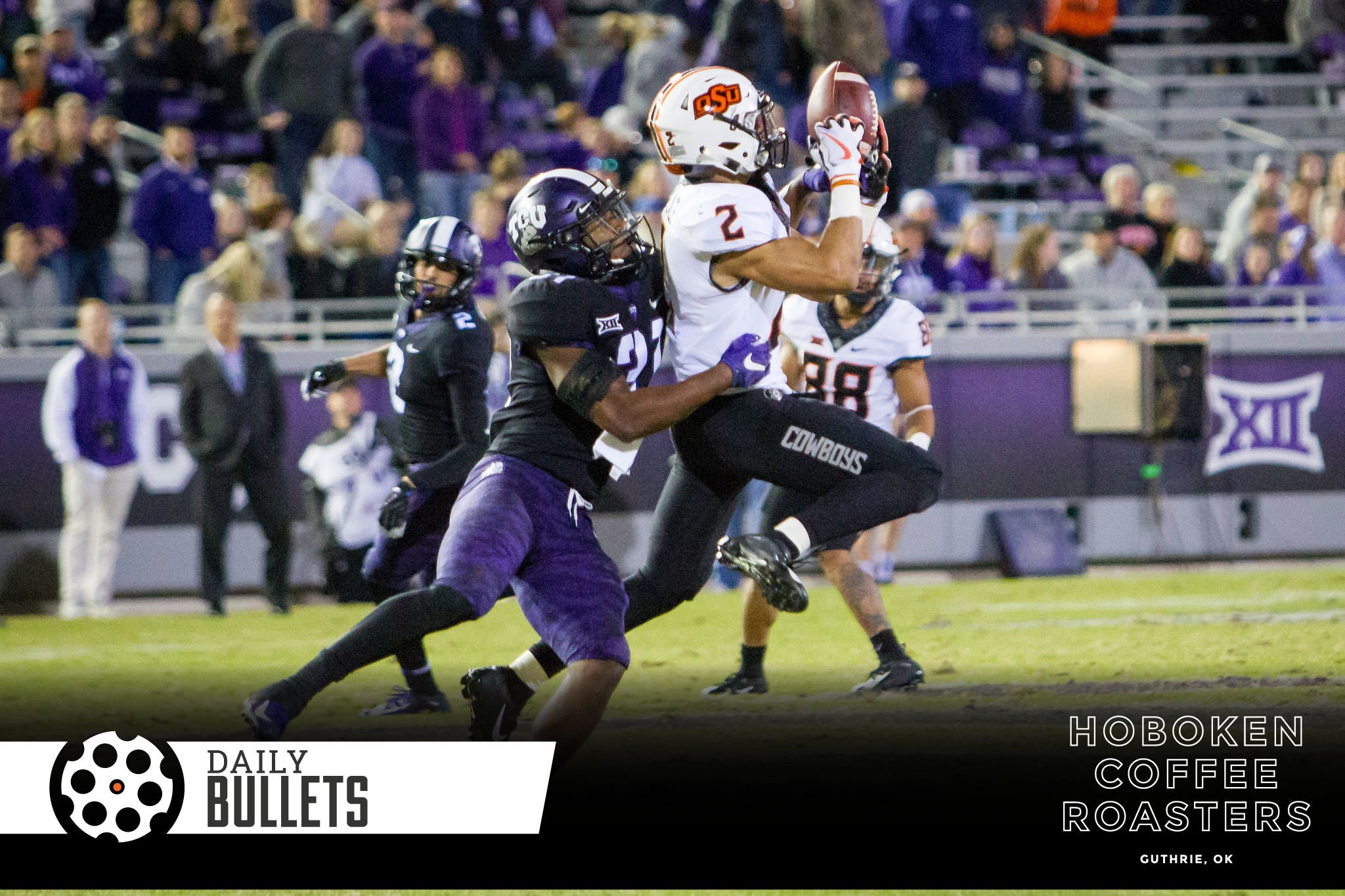 Reading through what most everybody has to say about the 2018 Cowboy Football season (Mike Gundy, media, etc.), there’s a recurring narrative that’s crystalizing at this point.

The Cowboys must be the craziest team in college football, don’t you think? I mean, I like to compare résumés of teams, but it’s impossible to compare OSU’s résumé with anyone. Who else has three good wins and one good loss? There are five mediocre teams in the Big 12 middle. Five teams better than Kansas but not on the level of OU/Texas/WVU/Iowa State. OSU went 0-4 against that great unwashed middle. Yet the Cowboys beat Boise State, Texas and West Virginia, while dang near beating OU in Norman. It’s crazy. [NewsOK]

If the Cowboys’ coach could solve the problem of his team’s erratic ups and downs, he would’ve fixed it weeks ago.

“I don’t have the answer. It’s the dangedest thing I’ve ever seen,” Gundy said late Saturday night after the Cowboy roller-coaster bottomed out in a 31-24 loss to TCU at Amon G. Carter Stadium.

“It’s crazy. How we can play one week and then the next week, we don’t play very well. We just don’t push through when things don’t go well early. You know, we just don’t really push over that toughness, and so we have to develop that as an organization, get it back to where it used to be. We’re just not very tough when things aren’t going well.” [NewsOK]

Sometimes teams are powerful. Sometimes they are pitiful. And sometimes they show traits of both extremes and wind up falling somewhere in between, leaving you to wonder what might have been amid their whimsy.

These are your Oklahoma State Cowboys this college football season. [TulsaWorld]

I was most interested in Gundy’s remarks – pointing to toughness being the barrier that they can’t break through. Lord knows he’d have a much better grip than I do but my first take would be motivation and not toughness. West Virginia riding you the whole game for you to take the lead late, sticking with the Sooners in Norman, and taking out Rock ’em Sock ’em Sam Ehlinger and the Horns tells me what you’re made of.

But when you’re playing championship afterthoughts like Baylor, TCU, and Kansas State and mailing in performances, it’s hard for me to believe you didn’t have the capacity to handle them easily.

Just because the Cowboys won as much as they lost, that doesn’t mean they still couldn’t set any college football records in 2018.

However, Oklahoma State did set a record, albeit a kind of unfortunate one. With a loss to TCU in their final game of the year, OSU became the first team to beat two Top 10 teams and lose to five unranked teams in the same season.

The Cowboys defeated No. 6 Texas and No. 9 West Virginia, while also almost beating No. 6 Oklahoma. [FanDuel]

Looking at the possible outcomes from Championship Weekend and what could come…..News on the UCF QBs injury was rough….Why Mack Brown is a good fit at UNC….USC’s AD is using up all of his capital….OU knocking on the door of the second-to-last CFP rankings

Pokes gearing up for some big league play on Friday.

Final from Wichita! Braxtin Miller pours in 30 on the night and #okstate moves to 5-0! pic.twitter.com/qk4XBWL0Oe