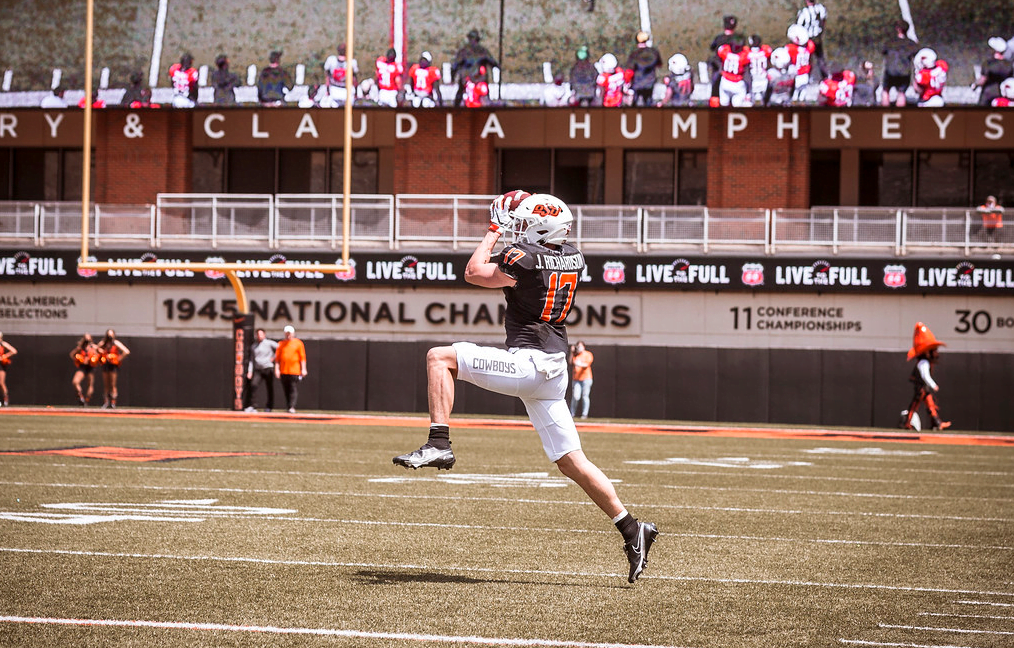 Next up in the 2021 recruiting class film study series, I take a look at three-star wide receiver, John Paul Richardson. Before we take a look at the Texas product, you can find my previous breakdowns in this series below:

At Ridge Point High School in Missouri City, Texas, Richardson hauled in 134 receptions for 2,240 yards and 23 touchdowns throughout his four seasons playing varsity for the 6A Panthers. He also ran the ball 65 times for 443 yards and added another 10 TDs. Ridge Point also had Richardson throw the ball on occasion, resulting in him going 8-for-11 for 123 yards and four scores. Richardson continued to display his versatility on special teams by returning kicks and punts and even assuming the role of placeholder on extra points and field goals.

Richardson was named to the All-District First Team his sophomore, junior and senior seasons. Last year, he helped Ridge Point (8 – 3) reach the Quarterfinals of the Texas 6A Division 1 Playoffs.

Outside of football, Richardson also participated in track and field. During his time at RPHS, he competed in the 200M, 4×100 Relay, 4×200 Relay, 4×400 Relay and the High Jump. His 22.55 personal best in the 200M earned him sixth place at the Summer Creek Generation Park Invitational last year.

I was able to watch Richardson’s playoff games from this past season against Seven Lakes, Jersey Village and Atascocita. Below I’ll breakdown his game and take a look at his skillset as he gets set to play wide receiver for the Pokes.

Richardson’s route running and release off the line of scrimmage are two things that stand out for him not only in his high school tape, but also in spring practice with OSU and in the recent spring game. For the Panthers, he lined up primarily on the outside, but worked from the inside receiver spot as well. His high school coaching staff had him running a fairly diverse route tree which included comebacks, corners, curls, hitches, outs, posts slants and deep go routes. In addition, they occasionally used him on wide receiver screens.

Below you’ll see Richardson with the nice route that leads to a red zone touchdown.

Richardson displayed good burst to eat up vertical cushion and then had enough top-end speed to continue to blow by the defender. He also showed nice snap on route breaks and used shifty footwork to get opposing defensive backs flipping their hips the wrong way. Additionally, Richardson consistently accelerated through his breaks, and did well to catch balls in stride without slowing down.

Off his release, Richardson has shown great footwork and hand usage to get by defenders at both the high school level and in college going against his teammates this spring. He saw a good amount of press coverage in the film I watched, and I know he’s seen his fair share from OSU defensive coordinator Jim Knowles’ defensive backs in practice, and he never shied away from the challenge.

In the next clip you’ll see an example of Richardson’s footwork on his initial release.

As he embarks on his career in Stillwater, I would like to see him continue to gain strength and be even more physical with defenders off his release and throughout his route, but other than that Richardson is solid in this area of the game.

As I mentioned above, Richardson does well to catch the ball naturally in stride and has shown that he can snag high-velocity throws outside of his frame. In the video below, you’ll see Richardson make a nice diving grab against Seven Lakes.

In addition, he normally catches the ball at full extension, away from his body and makes a quick transition to tuck the ball away and take off as a runner.

From Richardson’s high school film, you can tell that he’s not afraid of contact and will work to the football aggressively. He does a great job of fighting for position and has enough vertical leaping ability to grab the football at its highest point.

There were so many great catches in the three games I watched, it was hard to narrow them down for this post, but here are a couple shown in the following clips.

Since he will be playing inside for the Cowboys, Richardson will need to continue to improve on his ability to work back to the football across the middle of the field and enhance his catch instincts on quick breaking routes. However, from what I’ve seen on tape, this shouldn’t be an issue.

Richardson’s run after catch ability was not only shown as a receiver in high school, but also in the return game.

He’s not the most elusive runner, but he’s got solid lateral quickness and great vision. Additionally, he’s not afraid to get physical and was able to run over defenders at the high school level. In the video below, you’ll see Richardson with a nice run after the catch that results in a TD.

Along with his physicality, he has great balance and didn’t often get taken down on initial contact. He’s obviously shown he can do this at the college level as well, as we saw him make some nice plays in the spring game, and he’s been taking reps as a punt returner.

Richardson will need to continue to work on his top-end speed to be able to have any home run type plays at the college level, but he definitely has enough speed right now to pick up some yardage after the catch for the Pokes.

Richardson isn’t going knock DBs off their feet, but he will jump on them quickly with surprising aggression and strength for his 6-0, 180-pound frame. He often has the correct leverage and is always fighting to help open up running lanes for his teammates.

He’s a solid option for the front side of running plays and does a good job getting his hands on the defender and moving them out of the play. Richardson gave excellent effort blocking in all three games I watched and I’m excited to see how he performs for OSU.

I believe the style of play and routes utilized in Ridge Point’s offense will translate well to what Richardson is asked to do at OSU. Additionally, as an early enrollee with a high football IQ, I think he will catch on quickly and not have many issues understanding offensive coordinator Kasey Dunn’s system. And, we’ve already gotten a glimpse of Richardson’s ability in the spring game, as he caught seven balls for 47 yards, including the one shown in the Tweet below.

He has both Brennan Presley and Braydon Johnson in front of him at the inside receiver spot, and although I don’t think he passes either of those two on the depth chart, I do believe the Cowboys will run more 10 and 11 personnel than they did a year ago. This would mean more receivers on the field at one time, leading to plenty of opportunities for Richardson to see the field. Personally, I believe Richardson will lead all freshmen/redshirt freshman receivers in receptions this year and I’m really excited to see #17’s OSU career unfold.