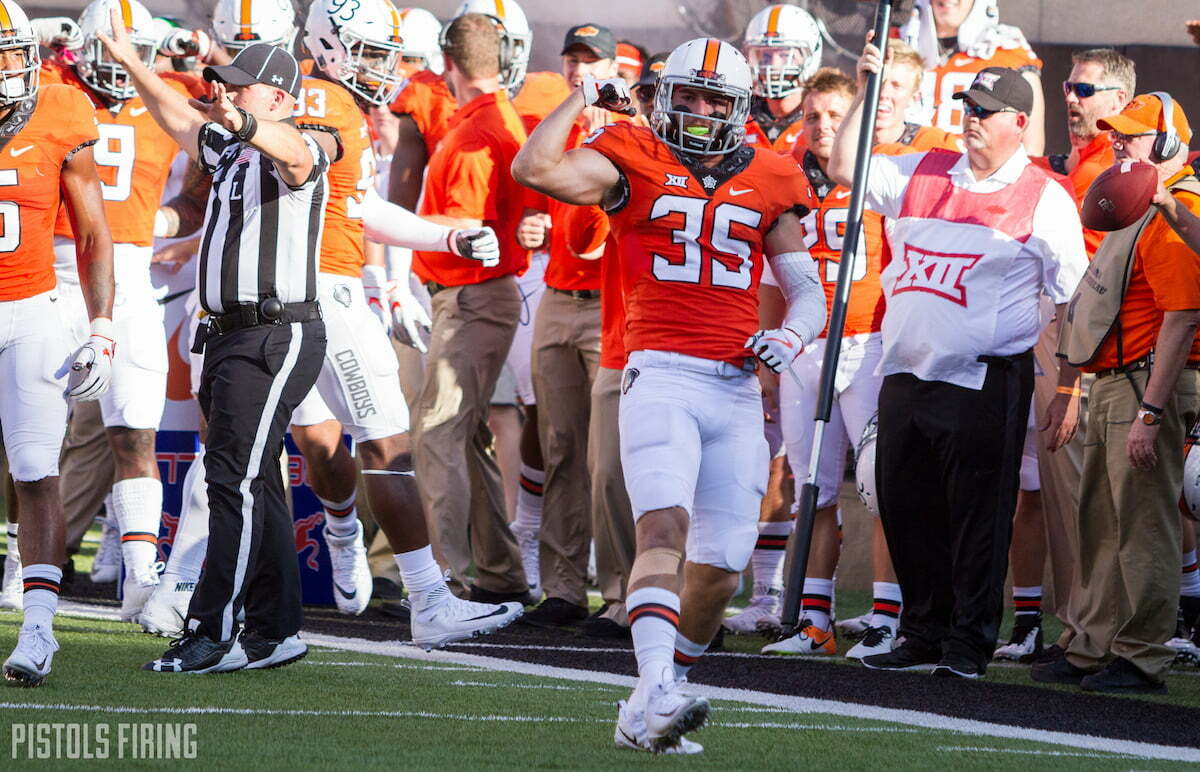 Last weekend the Pokes man handled a hapless Baylor squad 59-16 in front of a sellout homecoming crowd. Rickie Fowler served as the Grand Marshall for the Homecoming Parade and chipped signed basketballs into the stands at Homecoming and Hoops. It just doesn’t get much more “Oklahoma State” than that.

After completing the first half of the season, the Cowboys are staring down the barrel of a tough road stretch. The Pokes will have to play at Texas and at West Virginia before coming back home for Bedlam. Following a great Homecoming weekend in Stillwater, lets take a look at the top comments from the site this week.

I don’t mind them wearing w/o/w at home (it’s classic OSU), but I have been surprised that they’ve done it every home game so far. As someone else said, the weather could be the reason. Another theory I’ve got is that it could be a tie to the whole “SEAson of Orange” marketing campaign for this year. –CCC74955 on the uni combos so far this season.

I love the orange-white-orange look, but I would love to see OSU break out the black uniforms at some point. I doubt that will be against OU, but maybe against one of the Kansas schools. I would bet on the brand making a return for Bedlam as well.

2. Not So Special Teams

We have to remove McCleskey. After 2015 year I thought he would turn into a good punt returner. He simply has not done so. Great WR but not a good PR guy. We should put Tyron Johnson or Wallace back there against Texas. –Chris Stover on punt returning.

McCleskey hasn’t been good returning punts this year. After 6 games, its time to go in a new direction. Hopefully Gundy is giving Tyron Johnson and Tylan Wallace some reps in practice. This would be a great way to get Wallace involved and not waste his burned redshirt.

I thought of that exact same scenario. It was actually the conference’s fault for not naming ‘one true champion’. You can’t push two great teams (albeit a disfunctional Bailure and TCU) to the naming block and expect the CFPC to choose for you. At that point I figure they just used the Big 12 as an example of what not to try and pull. I might eat crow at some point for this, but that is exactly why no conference will ever have two teams in the CFP. –Adam M. on a 1 loss Big 12 team making the CFP.

If OSU is able to win out, it certainly helps their case to make the CFP as a championship game winner, as opposed to the Baylor-TCU situation from 2014. A 1 loss, Big 12 champion team in either OSU or TCU should probably get in to the CFP.

His chances are ahead of him. At Texas, at a top 20 WVU the next week, and then IF he shines on Nov 4 to lead OSU to a big win (bedlam), he’s in the race. Until then, He’s played 1 tough team (#4, 6-0 TCU) and it went awful. He’s got to shine when it counts and lead us to a Big12 title to have a chance. So far, he’s just domed cream puffs like Baylor. –Frank Eaton on Mason Rudolph’s Heisman chances.

Mason Rudolph still has plenty of chances to impress Heisman voters this season. If he is able to help OSU run the table, and OSU isn’t running the table without a Heisman worthy season from Rudolph, then he should be in New York sitting next to Baker Mayfield and hoping to hear his name called at the end of the night.

Can the Gundy statue be of him with his mullet and shirt off? –Tbeezy on what Mike Gundy’s statue should look like.

The only other acceptable statue option is of Gundy in a wrestling onesie, holding his “Big Daddy” coffee mug. Of course, the Mullet would be included as well. In all seriousness, the mullet needs to be included in his statue.

Let the Corndog have the best shot to win the job. Will have some decent WRs still then redshirt Sanders.

Let Sanders take over as a RS-FR. Would be huge to get Justice Hill & Tyron to stick around till they are seniors to help him along. –Tbeezy on the heir to Mason Rudolph’s throne.

I’ve been watching Spencer Sanders play football since his career took off during his sophomore year at Denton Ryan. I know this guy is a playmaker, and knows how to win. College is a huge leap from high school, but I would like to see Sanders become the starter at some point next season. Either way, Corndog is a solid quarterback who won’t play out of his world often. The Cowboys will be in good hands no matter who they start at quarterback next season.

7. Don’t Write Off This Cowboy Basketball Squad Yet

With the length we have, this team will surprise people. Kendall Smith and Zack Dawson’s ability to replace Jawun will be the ultimate tell for how good this team can be, but every other position will be better (or at least a year more mature). The coaching thing is a total wild card though, so that could change everything, but I’m not going to dismiss the potential of the team out of hand. –InCN on the potential of the Cowboy basketball squad.

While expectations certainly aren’t high for the Cowboy basketball team this season, they could be a wild card. With all of the X-factors and unknowns from the team and coaching staff, this team could do surprisingly well. For the sake of basketball in Stillwater, I sure hope so.

We don’t even have to play Press all the time… give them unique looks… press on the wide side and drop someone over the top to help, freshmen QB this week, be creative within reason.

Tackling and turnovers are going to win this game. –KennyBir on the OSU defense vs Texas this week.

Switching coverages early and often should confuse Ehlinger and hopefully result in some turnovers forced by the OSU defense. Forcing turnovers and getting ahead early will be important this weekend.

What I can’t figure out is how SI places us in the top 4 to start the season and with one quality loss they’re like “Nah,…. Camping World Bowl is the best this squad can do.” –Mark on OSU bowl projections.

OSU doesn’t have a really impressive win yet. The Pokes will have plenty of chances to prove themselves to the nation over the next three weeks. Although OSU’s current resume isn’t particularly impressive, not many teams have an impressive resume at this point. If the Pokes can win their next three games, they are right back in the CFP discussion…with Ames looming the week after.

That blitz with the four LB’er/safety blitzing with the 3 lineman falling back into coverage was phenomenal. This cetainly seemed like Spencer’s best game of the year. –oSutoothdoctor on the OSU defense vs Baylor.

Maybe it was Baylor, maybe it was a great game plan, but the OSU defense played great last weekend. They limited a surging offense to 16 points and a breakout receiver to 2 catches for 20 yards. The Pokes defense, along with Glenn Spencer, will need to execute at this level for the next several weeks if the Cowboys want to keep their title hopes alive.