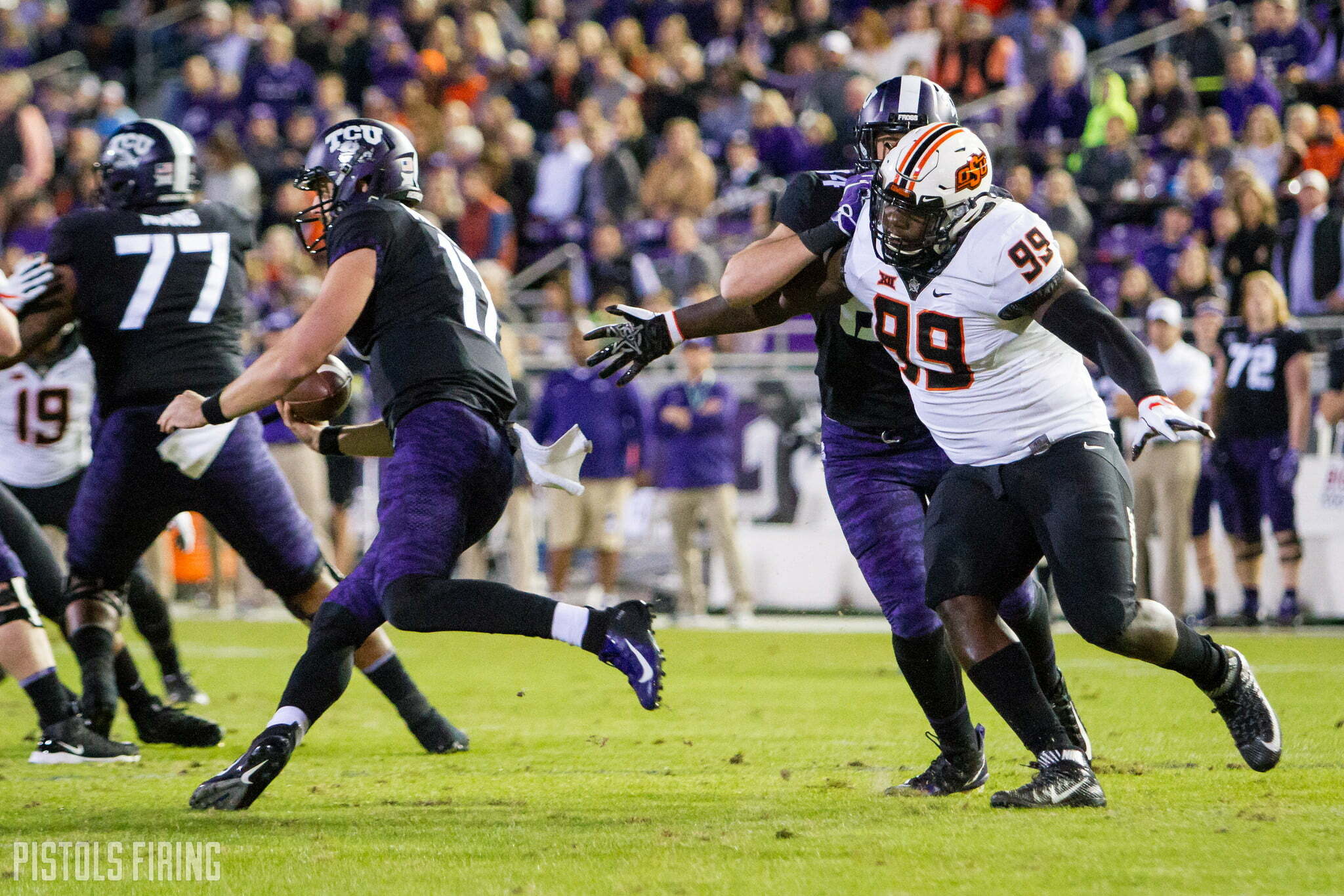 Up next in the recruiting reset series, we look at the big guys in the middle. Oklahoma State loses some key contributors at defensive tackle heading into 2019 and several guys will need to step up to make up for this lost production. Below I’ll dive into who’s leaving, who’s returning and what the 2019 recruiting class looks for OSU at the defensive tackle spot.

As I mentioned above, the Cowboys will suffer some significant losses at defensive tackle next season. Enoch Smith Jr., Darrion Daniels and Trey Carter won’t be returning, and this is a lot of lost production to make up for. These three combined for 56 tackles, including 5.5 tackles for loss and 3 sacks, and this is with Daniels’ season being cut short due to injury.

Since Daniels only played in four games this season, he is eligible to redshirt and technically could come back to play for the Cowboys next year. However, he has decided to transfer and will not be suiting up for the Pokes in 2019. The Dallas, Texas native racked up 64 tackles, 9.5 tackles for loss and 2 sacks during his tenure in Stillwater. He was the most talented defensive tackle on this roster, and was the leader of this Cowboy defense whether he was playing or on the sideline.

Along with Daniels, Trey Carter is another huge loss for the OSU defense. Carter led all Cowboy defensive tackles in total tackles, tackles for loss and sacks. He was a tough assignment for most Big 12 offensive linemen, as Iowa State’s O-line found out this season.

Lastly, even though he had his share of struggles this season, not having Enoch Smith Jr. is a significant blow to OSU’s depth at this position. Smith made stops at Michigan State and the junior college ranks before ending up in Stillwater, and was a good back up defensive lineman for this Cowboy team. He was asked to step into a starting role when Daniels went down with injury, and he did a decent job as a replacement.

With all of this production leaving, the Pokes need several guys to step into the spotlight and make plays next season. The first two players that come to mind are Brendon Evers and Cam Murray. Evers has shown flashes this season, recording 7 tackles, including a sack against Baylor shown in the clip below.

Murray also has 7 tackles on the year, along with 0.5 sacks, and has incredible athleticism for someone listed at 6-2, 290 pounds. Both of these guys have shown promise and look capable of improving throughout the offseason and into next year.

Outside of Murray and Evers, the junior college transfer Amadou Fofana and California product Samuela Tuihalamaka could see some run as rotation players on the interior of this Oklahoma State defensive line.

The Cowboys signed three defensive linemen on Wednesday at the start of the early signing period for the 2019 recruiting cycle: Jayden Jernigan, Sione Asi and Xavier Ross. I’ll discuss each of these recruits in more detail below.

Jernigan is the third-highest rated player in Oklahoma State’s 2019 recruiting class. He’s an extremely aggressive tackle who gets a good burst off the line of scrimmage and uses this quickness to blow by opposing offensive linemen.

He’s not the biggest guy on the field, but he uses his hands well and gives maximum effort on every play. Although he’s a little lighter, the Allen, Texas product gives me DeQuinton Osborne vibes as he’s a shorter, bulldog-like defensive tackle who does well stopping the run but can penetrate through the gap and pressure the quarterback. Jernigan has the skill to possibly crack the rotation next season for the Pokes.

The Cowboys added JUCO defensive tackle Sione Asi about two weeks ago. Asi has flew under the radar in his recruitment, but looks to be a solid addition to the OSU defensive line. He recorded 41 tackles, including 6 tackles for loss and 1 sack this past season for Snow College. Asi has some nice moves, which he showcases in the video below, allowing him to finesse his way past offensive linemen. In addition, he has the strength to shed his blocker and then the athleticism to make the tackle. It may take him a year to get adjusted to Big 12 play, but Asi should crack the rotation before his time in Stillwater is up.

Ross, who’s good buddies with Jernigan, is the biggest of the three incoming defensive tackle at 6-3, 285. Apparently, he’s now closer to 6-4, 290, and Rivals.com has him listed at 6-5, 290. The three-star prospect’s size allows him to clog up running lanes and his strength gives him the ability to move offensive lineman out-of-the-way once he gets his hands on them.

Unlike the finesse and quickness that Asi and Jernigan possess, Ross relies more on a bull rush when attacking the quarterback. He will certainly have time to develop into more of a complete pass rusher at Oklahoma State, and has the body and attitude to become a major contributor on this Cowboy defense in the future.

I’m really excited about the potential of all three of these guys and am looking forward to watching them grow throughout their college careers.