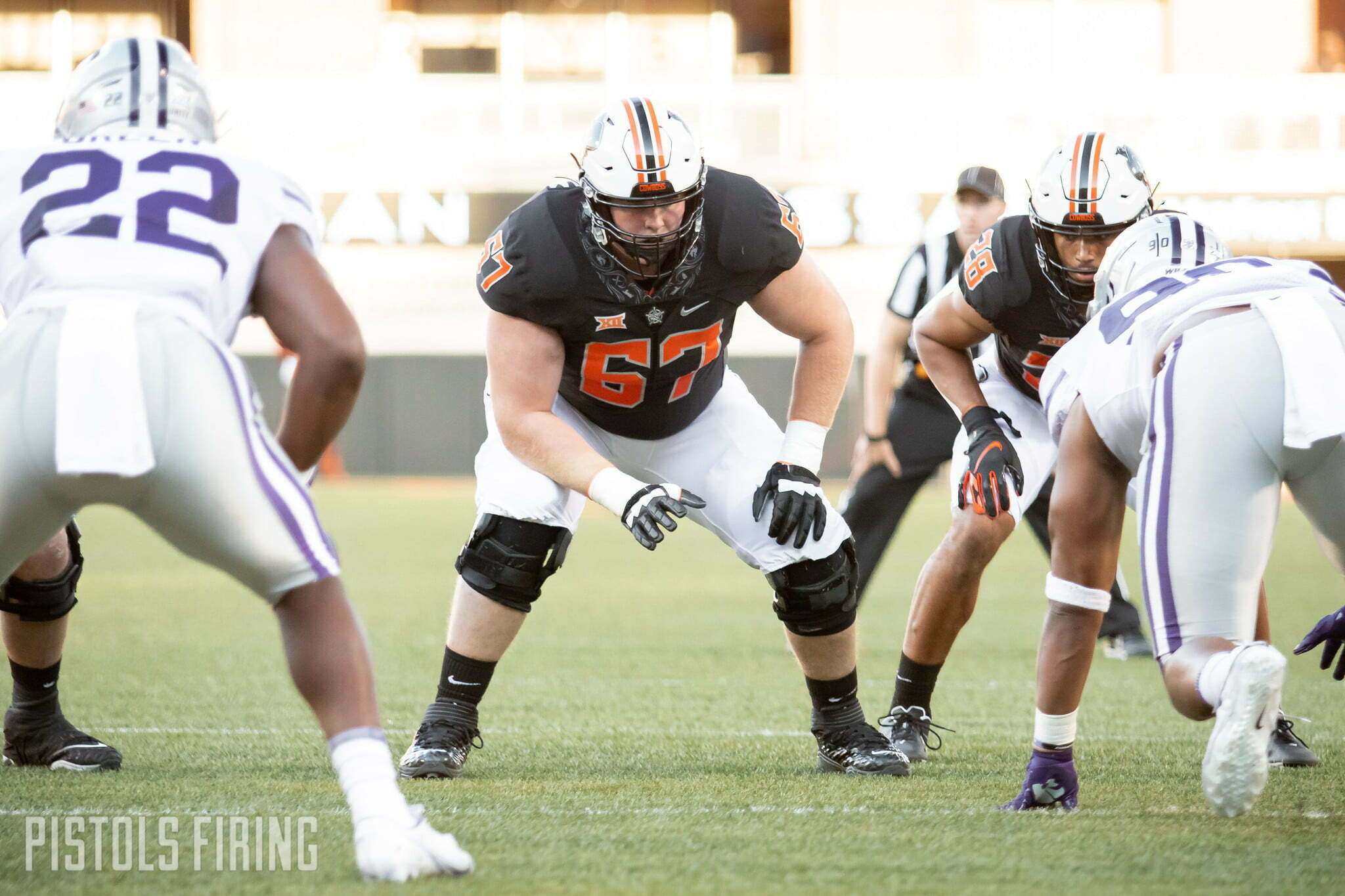 Oklahoma State’s first spring football practice is next week. It will be the first chance for Cowboys coaches to see what they have on the practice field for each position group, and there’s not one with more holes to fill than OSU’s offensive line.

The Cowboys said goodbye to six scholarship O-linemen this offseason including two starters. And with a thinning depth behind Spencer Sanders and their having to replace leading rusher Jaylen Warren, the Pokes’ line will need to retool and gel up front, and do so quickly.

Before we get into the big fellas up front, make a note to check out any of our prior position previews that you might have missed: RB | QB | WR | TE | CB

In the world we live in — the age of transfers in college football — it’s sometimes more about who is not returning than who is.

The Cowboys lost depth pieces Tyrese Williams, Cade Bennett, Hunter Anthony and Monroe Mills to the transfer portal in addition to saying goodbye to starting center Danny Godlevske and starting guard Josh Sills, who each exhausted his eligibility. That’s where the transfer portal hurts a program like OSU that doesn’t land five-star tackles on the reg.

Traditionally, the Pokes have to invest time in their linemen — maybe more than any other position — before they are ready to compete for reps on Saturdays. Now they’ve lost four of those assets that would have factored into the mix this spring and next fall, and one who might have started.

Who is entering the mix: Four-star Tyrone Webber (6-5, 290 pounds) is on campus this spring hailing from New Mexico Military Institute. He was the No. 2 junior college OT according to 247’s Composite ranking. He should be ready to begin vying for a spot next week.

Webber is the lone spring addition for Charlie Dickey’s group, but the Cowboys also added three-star tackles Austin Kawecki, Davis Dotson and Calvin Harvey who will be folded into the group this fall.

But as far as this spring goes, the Cowboys will need to work with that they have, and the biggest question facing coaches is who will snap the ball.

The loss of Tyrese Williams on the transfer market makes things a bit murkier at the crucial center position. He was one that could have competed for Godlevske’s vacated spot. Based on what we know, I’ll predict that Joe Michalski, who filled in for an injured Godlevske the last four games of the year. There were some growing pains up front but that comes with the lack of experience.

Mike Gundy talked about Michalski’s performance spelling the starter as a redshirt sophomore ahead of OSU’s Big 12 Championship appearance.

“He will show signs of youth and inexperience,” said Gundy, “but he’s performed at a higher level than what I thought he would have.”

Whoever the Cowboys land on, the group will need to gel quickly. The Cowboys are going to have to break in a new RB1 so a good run-blocking will be paramount. Even more importantly, OSU doesn’t have a quarterback not named Spencer Sanders who’s thrown a pass at the collegiate level. That group needs to protect No. 3. It will be a crucial spring for the Cowboys up front.