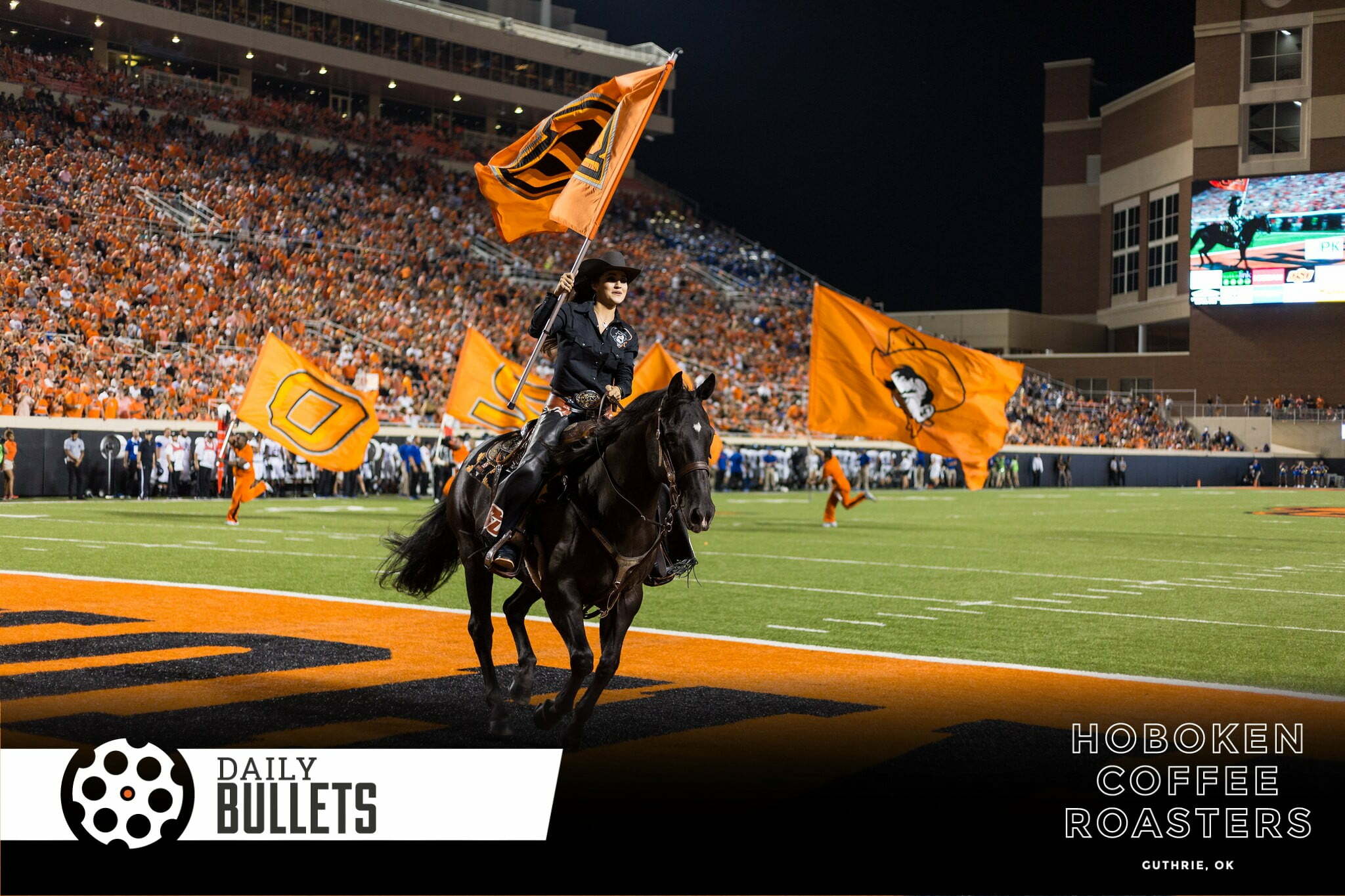 Beat Tulsa – here’s the exhaustive preview for this morning’s game.

• The Big 12 formally invited four new schools – BYU accepted immediately
• Cincinnati and UCF did as well – Houston accepted the bid
• OSU administrators and coaches responded
• Potential divisions in the new Big 12
• PFB Podcast talking about the new league (and previewing TU game)
• Big 12 might not be/probably isn’t done expanding
• The AAC is open to letting Cincy, UCF, and Houston out early for more $$$

• One of the more interesting topics from yesterday broke open when the BYU athletic director noted the new Big 12 would have two football divisions – there’s really two options that seem most logical: East/West and North/South

Marshall did a great job noting the “Texas for All” plan but it’s really a matter of will BYU or UCF be with the Pokes and the Texas schools.

• This TulsaWorld columnist has the Pokes winning 30-17 today – he points out that the defense at Tulsa is still good without first-round pick Zaven Collins as well.

• Bobby A. had some color on the new schools the Big 12 is adding – this quote on further realignment timelines is something to be aware of too:

What does this mean for Oklahoma State? For now, Oklahoma State and the other remaining seven are committed to the new Big 12 set up. However, I do believe as the Big Ten and he Pac-12 near the negotiations on a new television and media right contract with the Big Ten in 2023 and the Pac-12 in 2024 just ahead of the Big 12 in 2025 that realignment could come bubbling back up with leagues looking for a few attractive new members.

• I’m all in with Marshall here – Texas is a brand that hasn’t match it’s reputation:

• Two best “Let’s hack off Texas and OU ideas” below. 11am games for OU only.

• I liked this realignment question from a CBS article:

What’s the best rivalry in the new Big 12? Twelve teams in five states from the Atlantic to the Wasatch Mountains?

West Virginia-Cinci and OSU-Tech would be natural… TCU feels like OSU’s most natural threat. The Doug Meacham Bowl played in Ardmore each year?

• No. 1 Ten Thoughts from the Missouri State game

• No. 3 Spencer Sanders to miss the Missouri State game

• No. 4 Daily Bullets from Thursday – New applicants to the Big 12

• No. 5 What Gundy said about the Missouri State game

Sort of a funny thing to talk about but I like this quote on how friendships happen:

“Friendship happens on the way to something else.

If you “try to meet new people” it feels weird and forced. The more you aim for friendship, the more it eludes you.

But if you aim to learn or achieve something with others, friendship happens naturally during the shared pursuit.”