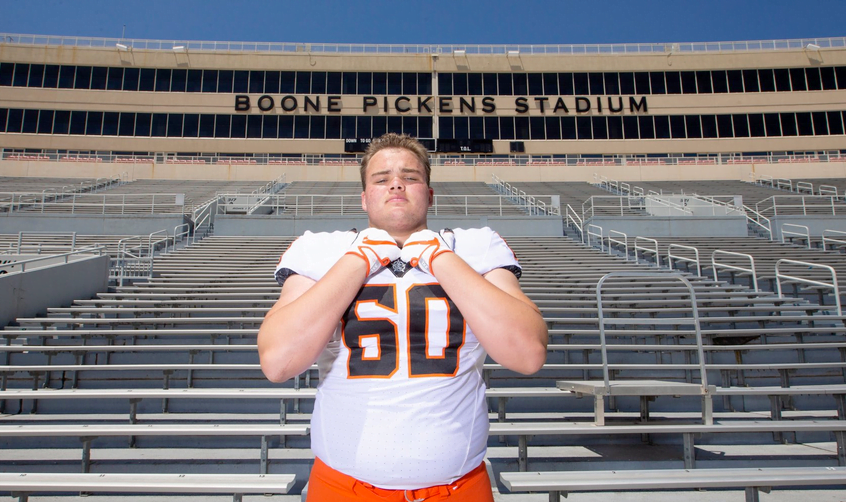 Before we take a look at Bennett, you can find the previous breakdowns in this series below:

The 6-foot-5, 295 pounder helped lead the Saints to an 11-2 record and the semifinals of the Arizona 5A High School Playoffs. He primarily lined up at right guard, but in the tape I watched I also saw him move to the left side of the line and even take some snaps at tackle. In addition, Bennett played on the defensive side of the ball for ND Prep.

I was able to watch the Saints’ playoffs games against Gilbert and Millennium from Bennet’s junior year, and their playoffs matchups with Campo Verde and Cienega from this past season.

Now, let’s get to the breakdown.

Bennett is an absolute monster in the run blocking game. He consistently explodes off the line of scrimmage and has shown that he can handle both man and zone blocking assignments. His initial pop off the line is overwhelming to defenders at the high school level and he was easily able to maul his way into opening up running lanes. Bennett does a great job of finding leverage points and driving through defenders. He displayed this over and over again on film, as you’ll see one example below.

I think Bennett can continue building strength, but I already believe he will able able to handle defensive linemen at the college level and is going to be a force in the OSU run game. In regards to his technique, he puts a majority of his weight on his heels, as you’ll see in the following image, which normally would tip off to a defender that he’s going to pull or pass block, however, he consistently lined up like this on every snap.

His stance may be something Cowboy offensive line coach Charlie Dickey looks to make some tweaks to, but it certainly didn’t seem to be an issue for him in high school.

As a pass blocker, Bennett does a great job of using his 6-5 frame to quickly get his hands on defenders and keep them at a distance. He also shows off his overall strength and ability to move defenders with ease. An example of this is shown in the following video.

I never saw him get caught unprepared for contact with a defender off the snap, and he has the strength to stagger pass rushers with his initial punch and then easily absorb the oncoming impact. As I mentioned above, Bennett primarily played guard in the film I watched, and although I think he has the talent to play tackle, I would be a little worried about his lateral movement at this current stage. He does a good job of keeping a wide base and technically his footwork looks good, but his feet are a little heavy when moving side to side.

Overall, I think he’s solid in pass protection, but I believe there is room to improve. I don’t think Bennett will have issues with power rushers, especially not after some time in the weight room with strength and conditioning coach Rob Glass, but I do think speed rushers may pose a problem.

I’ve discussed this briefly in the sections above, but Bennett’s hand usage is very impressive. He’s got great grip strength and once he gets his hands on a defender they are usually taken completely out of that play. I don’t think I saw a defender break his grip in the film I watched. He will quickly establish his hands on the defenders numbers and works to keep them there as he is moving his feet.

Although I mentioned above that Bennett’s lateral movement is an area for improvement, his speed to get outside on pulls and to get to the second level off a combo block is impressive. He has plenty of experience pulling from the guard spot, which will bode well for his transition into the OSU offense, and had little trouble landing a block on the perimeter, as shown in the following clip.

He treats his second level blocks exactly as he does at the line of scrimmage, aggressively driving through defenders until the whistle sounds. Bennett also takes good angles when in space, which allows him to consistently find his targets.

Overall, I’m very excited that Bennett has decided to continue his playing career in Stillwater. He adds great depth to the offensive line room and I think he has the potential to be a starter after a year or two on campus learning from coach Dickey and the rest of the staff.