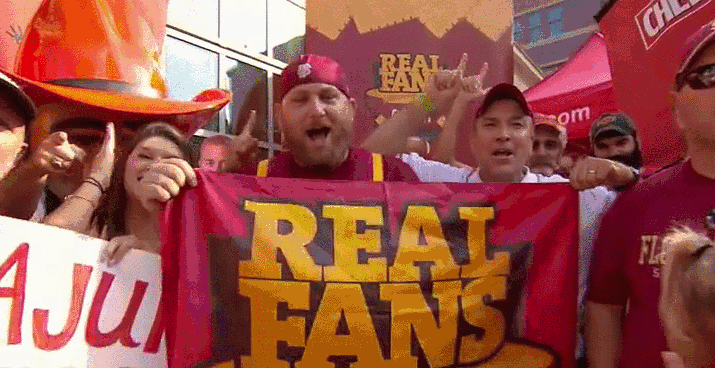 A few quick notes, links, and predictions here from yours truly before we get things rolling with Florida State on Saturday night.

If you missed anything leading up, here’s the best stuff to read to get you fired up for the game:

If you missed it this morning, Gameday was a circus. There was an insane Trail of Tears sign, Lee Corso pounding beers and shooting guns, and this Pete photobomb, which was awesome:

• I would appreciate you reading this piece I did on new beginnings and the 2014 season.

• I’m heading over to AT&T Stadium at about 3 PM to cover the game — cover a real live game! — for CBSSports.com. Don’t worry, I’ll have plenty of content for PFB as well, including 10 thoughts, superlatives, and other goodies. It might just be a little later than usual.

• As I write this tOSU trails Navy at the half. Wouldn’t it be wild if only one OSU won on Saturday and it wasn’t the one playing Navy…

• I’m not sure I’ve been this stoked for a season opener since the Georgia game in 2009. I know OSU likely won’t win but it’s still going to be a blast.

• New threads tonight? It would be a good spot — national television, defending champs, young squad — for them.

• Things I’ll be watching for at the game: How the young linebackers respond, where Tyreek lines up, whether FSU dares JW to beat them deep, Gundy dancing.

• Again, low odds, but how much would this whole thing flip on its head if OSU won and OU lost tonight…? It would be the inverse of how last year ended.

• When I introduce myself to players and coaches in the postgame I’m going to say “hi, Kyle Porter, Pistols Firing, blogger kid from Dallas…could you talk about…”

• I’m fascinated by the QB situation (per the usual for a Gundy-coached team). Will JW have a quick hook? Is there a script already in place for Daxx? Does Rudolph tease us with Lunt-like lasers? I have no idea what to expect.