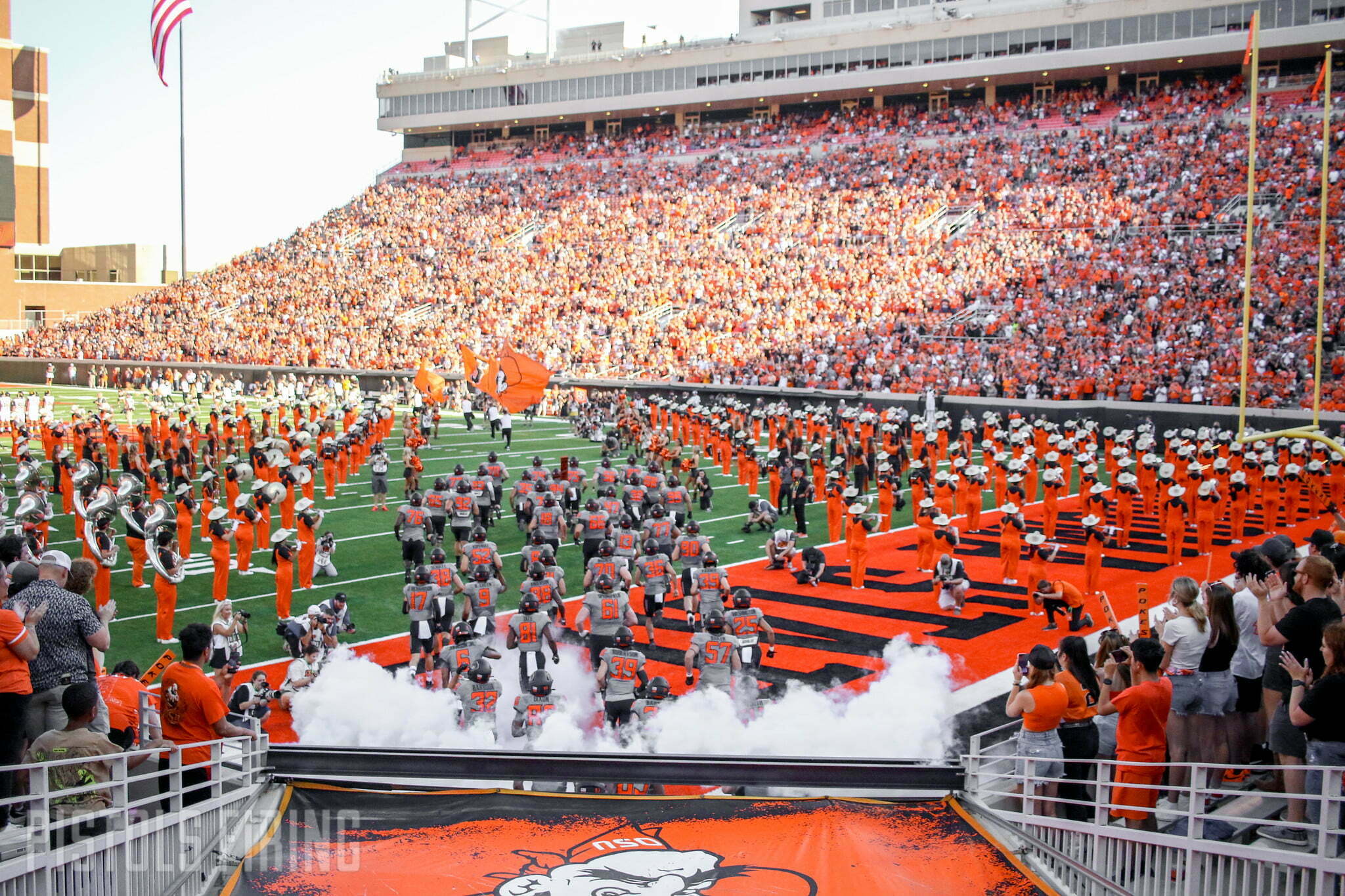 It has been a crazy few weeks for college football with the transfer portal opening and then overflowing with players looking for greener pastures.

Oklahoma State, like just about every other program around the country, is having to deal with the effects of some of its players looking to go elsewhere, but the Cowboys have also sent out a few earlier offers. Oklahoma State was active in the transfer market before the portal officially opened Dec. 5 — sending out offers to a pair of Tulsa defenders and a pair of Ivy Leaguers — but here is a look at guys who have announced offers after the Dec. 5 opening. This list will be updated as more offers come out.

A four-star prospect in the 2021 recruiting class, Arland Bruce caught 44 passes for 396 yards and two touchdowns in two seasons with the Hawkeyes. He also ran the ball 21 times for 116 yards and four more scores.

Playing his high school senior season at Ankeny High School in Iowa, Bruce committed to Iowa as a high school junior over offers from Iowa State, Tulsa and Western Illinois.

Since entering the transfer portal, he also has reported offers to Fresno State and Tulane.

Out of West Bloomfield High School, Broden was a three-star prospect in the 2019 class with offers from Iowa State, Indiana, Purdue, Syracuse and others before going to Bowling Green.

Across the past four seasons with the Minutemen, Johnson has caught 50 passes for 465 yards and five touchdowns while also running for a pair of scores. He has also spent time as a quarterback with UMass. Against Arkansas State this past season, Johnson caught eight passes for 58 yards, both career highs.

Johnson hasn’t announced any other portal offers as of writing.

Johnson has one year of eligibility remaining after appearing in every game over the last four seasons for Eastern Michigan and starting every game at left tackle the last three. Would be a huge get for the Cowboys.

The 6-foot-4, 308-pound left tackle entered the transfer portal on Dec. 29 and has since announced a slew of Power Five offers that include BYU (almost), Cal, Louisville, Missouri, Kansas, Illinois and Wisconsin with the Cowboys throwing their hat in the ring Friday evening. Out of high school he held offers from Indiana State, North Dakota and Wyoming.

The Cowboys continue to try to fill some gaps along their defensive front. Kirkland, a 6-foot-4, 295-pound defensive tackle, hails from Utah Tech in the WAC where he’s been on the roster since 2020. Due to taking time on his LDS mission trip, he has three years of eligibility left. Utah Tech’s willingness to hold his offer while on that mission is what he credited for his decision. The school’s website bio states he was recruited by Utah, BYU, Utah State and others but Utah Tech was his only offer according to 247, likely due to his other obligations.

Kirkland has since tweeted out offers from fellow Big 12 schools Cincinnati and Kansas State. He announced an official visit to Stillwater next week.

The 5-foot-10, 150-pound wideout plays bigger than his size indicates and he’s a big play waiting to happen. Johnson totaled 863 yards and four touchdowns on 56 catches. He’s been Troy’s leading receiver the last two seasons and played all 11 games as a true freshman the year before that. Thanks to the NCAA’s Covid-19 waiver, Johnson would have two years of eligibility remaining.

Johnson announced he was entering the transfer portal on Dec. 20. As of writing, Johnson has also received offers from Cincinnati, Penn State and Indiana. He is the adopted younger brother of Oregon (and former Auburn) quarterback Bo Nix.

A 5-foot-9, 177-pound sophomore, Drae McCray led Austin Peay this season with 76 catches for 1,021 yards and nine touchdowns. Austin Peay also used him as a runner from time to time, where he had 12 carries for 54 yards. McCray had four games with at least 100 receiving yards this season, including a 166-yard performance against Murray State and a 158-yard performance against Mississippi Valley State.

As a high school recruit, McCray was listed as a running back. A three-star prospect, McCray chose Austin Peay over offers from Buffalo, Coastal Carolina, Arkansas State, Georgia Southern and others. He finished his high school career with 4,358 all-purpose yards.

As of writing, McCray has also announced offers from Texas Tech, West Virginia, Oregon, Colorado and others.

Listed at 6-2, 197 pounds, Guillory led Idaho State with 52 catches for 785 yards and four touchdowns this season. He caught five passes for 120 yards and a score in Idaho State’s win against Cal Poly this season, and he also had a 75-yard touchdown catch against FBS San Diego State.

A member of the 2019 high school class, Guillory attended Lewis and Clark in Spokane, Washington. A three-star recruit, he chose Idaho State over offers from Army, Air Force, South Dakota State and others.

Since hitting the portal, Guillory has announced offers from Utah, Arizona State, Washington State, Colorado and others.

Listed at a monstrous 6-foot-8, 342 pounds, Washington started 10 games for the Golden Flashes this season. Behind Washington, Kent State averaged 28.4 points and 417.9 yards of total offense a game.

A member of the 2020 high school class, Washington was a three-star recruit and chose Kent State over offers from Akron and Bowling Green out of St. Vincent-St. Mary, the same high school LeBron James graduated from.

Since entering the portal, Washington has also announced offers from Southern and Arkansas State.

A 5-9, 205-pound senior, Ray Davis is fourth in the SEC in rushing this season with 1,042 yards to go with five rushing scores. He is just the 10th player in Vanderbilt’s history with a 1,000-yard rushing season. Davis eclipsed the century mark five times this season, including a 167-yard performance against South Carolina.

Davis was a three-star prospect out of Blair Academy in New Jersey in the 2019 class. He chose Temple over offers from Kent State, Army, Navy and others.

Since reentering the portal, Davis has also announced an offer to Kentucky.

Out of Kapolei, Hawaii (on Oahu), Stribling was a three-star prospect in the 2021 class and chose an offer to Washington State over offers from Hawaii, Wake Forest and San Diego State. He was an All-State selection as a high school senior, catching 64 passes for 872 yards and nine touchdowns.

He has also announced a transfer offer from Utah.

A 6-foot-5, 245-pound tight end, Tanner Arkin caught 15 passes for 131 yards this season for the Rams as a redshirt freshman.

Out of Fossil Ridge High School in Fort Collins, Arkin was a member of the 2021 recruiting class. A three-star prospect, Arkin initially chose Colorado State over offers from Wyoming and Penn.

Since entering the portal, he has announced offers to UConn, Illinois, New Mexico State and Sam Houston.

Listed at 6-foot-3, 208 pounds, Kendarin Ray is the third Tulsa defender OSU has offered since the Golden Hurricane fired coach Philip Montgomery — joining Justin Wright (now an OSU commit) and Anthony Goodlow. Ray, a redshirt senior this past season, was third among Tulsa defenders in tackles this year with 86. He also had an interception, three tackles for loss, five pass breakups, three forced fumbles and a fumble recovery.

In 37 games across the past four seasons, Ray had 221 total tackles, 6.5 tackles for loss, one interception, 12 pass breakups, four forced fumbles and three fumble recoveries.

Ray was listed as an athlete coming out of Brenham High School (Texas), playing quarterback. In his senior season, Ray threw for 1,039 yards, ran for 1,163 yards and had 22 total touchdowns. He was a three-star recruit (ranked 2,165th nationally) before singing with Tulsa.

Since hitting the portal, Ray has also announced an offer to Arkansas.

Listed at 6-foot-5, 245 pounds, Josh Cueavas caught 57 passes for 663 yards and six touchdowns for Cal Poly as a redshirt freshman in 2022. He was named to the All-Big Sky Third Team and an FCS Freshman All-American.

As an unranked prospect at Campbell Hall High School, Cueavas as a junior caught 55 passes for 700 yards and 11 touchdowns as while also having 62 tackles, 10 tackles for loss, four sacks and four interceptions as a defender.

A 6-foot-5, 290-pound defensive lineman, Shand played in nine games and made seven starts in his redshirt sophomore season in 2022. On the season, he had a career-best 23 total tackles, including 2.5 sacks, two forced fumbles and a fumble recovery.

In 24 games across the past three seasons with Arizona, Shand had 41 tackles, 5.5 tackles for loss and five sacks.

A three-star prospect in the 2020 class out of The Loomis Chaffee School (Connecticut), Shand picked Arizona over offers from Rutgers, Boston College, Vanderbilt and others.

Since entering the portal, he has received offers from OSU, Texas Tech, LSU, Rutgers and Ole Miss.

Listed at 5-10, 188 pounds, Jason Maitre has played at safety and corner for Boston College this season, but most of his snaps have come at safety. As a redshirt senior in 2022, Maitre had 42 tackles, two tackles for loss, one sack, six pass breakups and an interception.

He has started games (some at safety, some at corner) for Boston College across the past four seasons. On his career, he has 133 total tackles, nine tackles for loss, four sacks, three interceptions and 19 bass breakups.

A three-star prospect in the 2018 recruiting class, Maitre chose Boston College over offers from Bryant and Rhode Island.

Since entering the portal, he has announced transfer offers to Florida State, Texas A&M, USF and others.