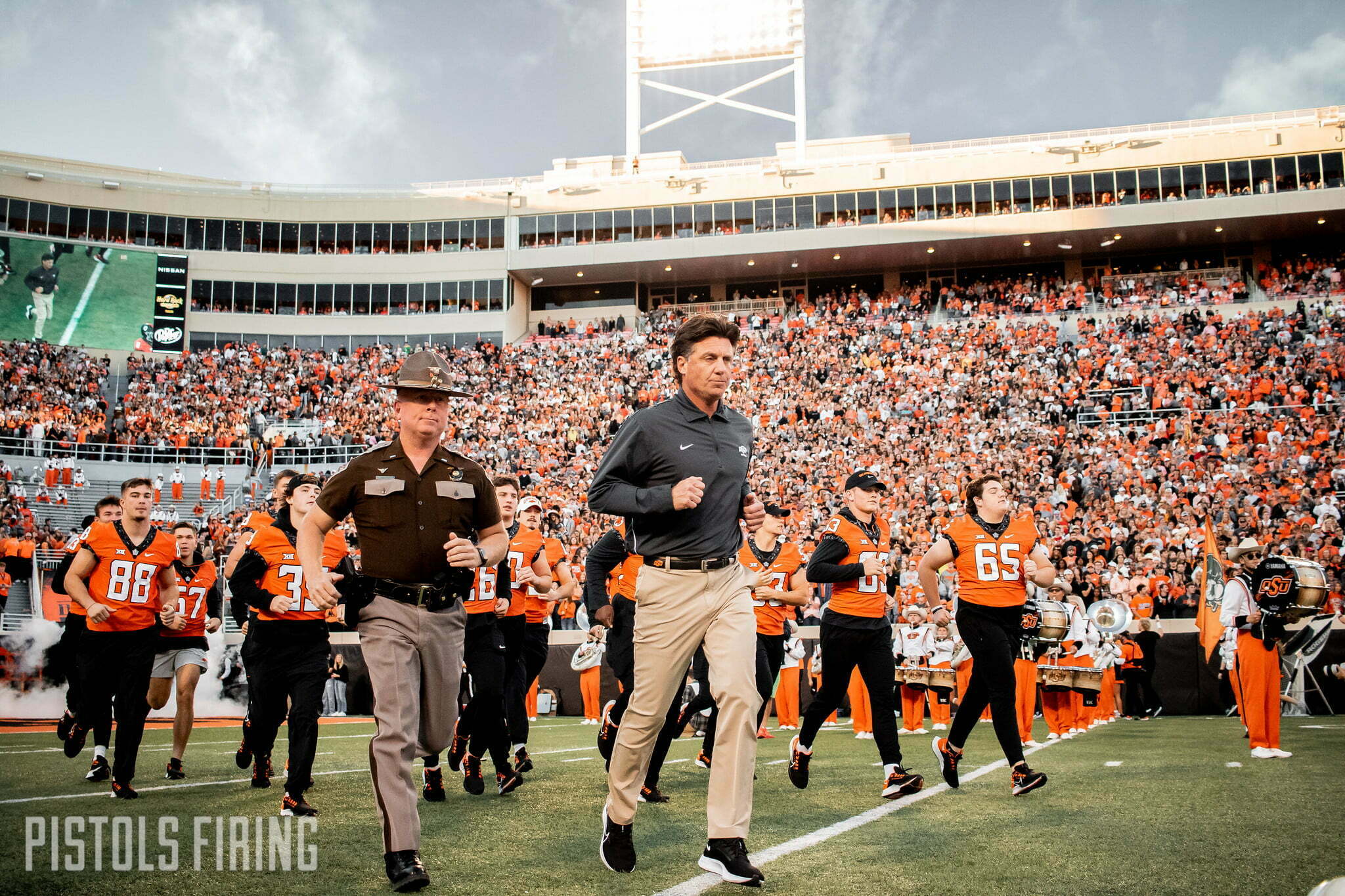 Before we stick a fork in 2021 and get ready for Oklahoma State’s Fiesta Bowl against Notre Dame, let’s take some time to look back. I’ve already listed my picks for the top storylines from the past year. Now here is a list that shows which subjects were most important to you, our readers.

Here are the 10 most-viewed articles from Pistols Firing in 2021.

1. Super Powers: What Four 16-Team Conferences Could Look Like

We were just sitting around, lazy, in the doldrums of July when a leaked report was confirmed and Oklahoma and Texas dropped an A-bomb on the rest of college sports.

What followed was our biggest summer ever at Pistols Firing, because of course. It was a whirlwind and will continue to provide us with storylines when it comes to Oklahoma State and its conference for time to come.

Here I posited — before the foursome the Big 12 added — that the Red River Retreat could serve as the first step toward the age of Super Conferences, and what they might look like. It still could, by the way.

2. A Reckoning in College Football Mike Gundy Was Way Ahead of

Kyle Boone is so good here. He wrote about how the transfer market has changed college football and how antiquated the per-class scholarship limit has become.

But the changing landscape necessitates changing legislation. Twenty-five-man caps in this environment completely swims against the spirit of the legislation to begin with. The sport has changed so much in the last two years it’s nearly inapplicable.

This post made it into the Top 3 in less than a month. Within minutes of writing about Jim Knowles’ departure to Ohio State, our fearless leader Marshall Scott, was thinking through possible replacements Mike Gundy should add to his list of DC candidates.

Herbie had some harsh words for Big 12 defectors Oklahoma and Texas, but he was pointing them more at the direction of the sport itself.

What’s becoming abundantly clear, and I hate to say this because I’ve always tried to fight it, is people are trying to stay at the top. They’re trying to compete with the SEC, and it’s all about money. It’s no longer about tradition. It’s no longer about the things that I think college football have always kind of tried to stand itself on top of and really look at and appreciate rivalries and tradition and things of that nature.”

5. Big Ten Reportedly Only Interested in AAU Schools, Which Would Exclude OSU

It seems like a decade ago now, but in mid-to-late July, every 12 hours brought a new narrative. Remember that day when the biggest question, Does OSU go to the Pac-12 or the Big Ten?

Marshall did a great job of what we always aim to do. He took a report/notion/narrative, thought through it from an OSU perspective and laid out a fully formed idea and some quality content. How about a map lay of a potential 16-team Big Ten that included OSU and Kansas?

The Big 12’s commissioner pulled few punches during the weeks that followed OU-Texit. Bowlsby put forth that the AAC was trying to absorb the remaining eight Big 12 teams after OU-Texit. He had also alleged that ESPN was in cahoots with the two schools to effectively absolve the conference.

Again, it was a wild summer.

There were mixed emotions among the players when news broke that Jim Knowles was headed to Columbus. Brock Martin had already petitioned for a blank check for his DC. OSU couldn’t offer one, and tOSU was able to secure his services.

There was some shock, some disappointment. But, overall, Knowles’ pupils seemed genuinely happy for their coach. Business details and defensive stats aside, that says a lot about the impact he had on his players.

Gundy opened up to ESPN’s Marty Smith on conference realignment, specifically what it will mean for OSU and the future of the Big 12. Go back and check that out. It still holds up.

But I’m going to go with the softball Smith tossed him about Cade going first overall and the very Gundy way he described OSU’s first ever No. 1 pick, “he plays pretty good.”

“It’s awesome. When we play well here in football, our enrollment goes up. When Coach Sutton was here and we were going to the Final Four, our enrollment was up. People like winners. People like success. With Cade being here and being in the position he’s in, it only takes [the OSU logo] and brands us and markets us even more. I don’t know him really well, but I hear fantastic things about him as a person, that he’s humble. I watched some games of his on TV, and he plays pretty good.”

9. Could the Pac-12 Pull Together a Super Conference That Includes OSU?

More on conference realignment. Just want to point out again what a great job Marshall did and does turning tweets or talking points into fully formed and relevant posts. Selfishly, I am so glad OSU is going to be playing in the Pacific Coast timeslot.

If the SEC were to take another Big 12 school, OSU seems like the logical third choice, so if super conference’s are the way of the future, the Pac-12 would be smart to grab the Pokes.

10. Big 12 Has Reportedly Formed a Subgroup to Explore Expansion

So that’s seven of the 10 most-viewed articles involving conference realignment. It makes sense. It was not only the biggest storyline of the year for OSU athletics, it was the biggest in all of college sports.