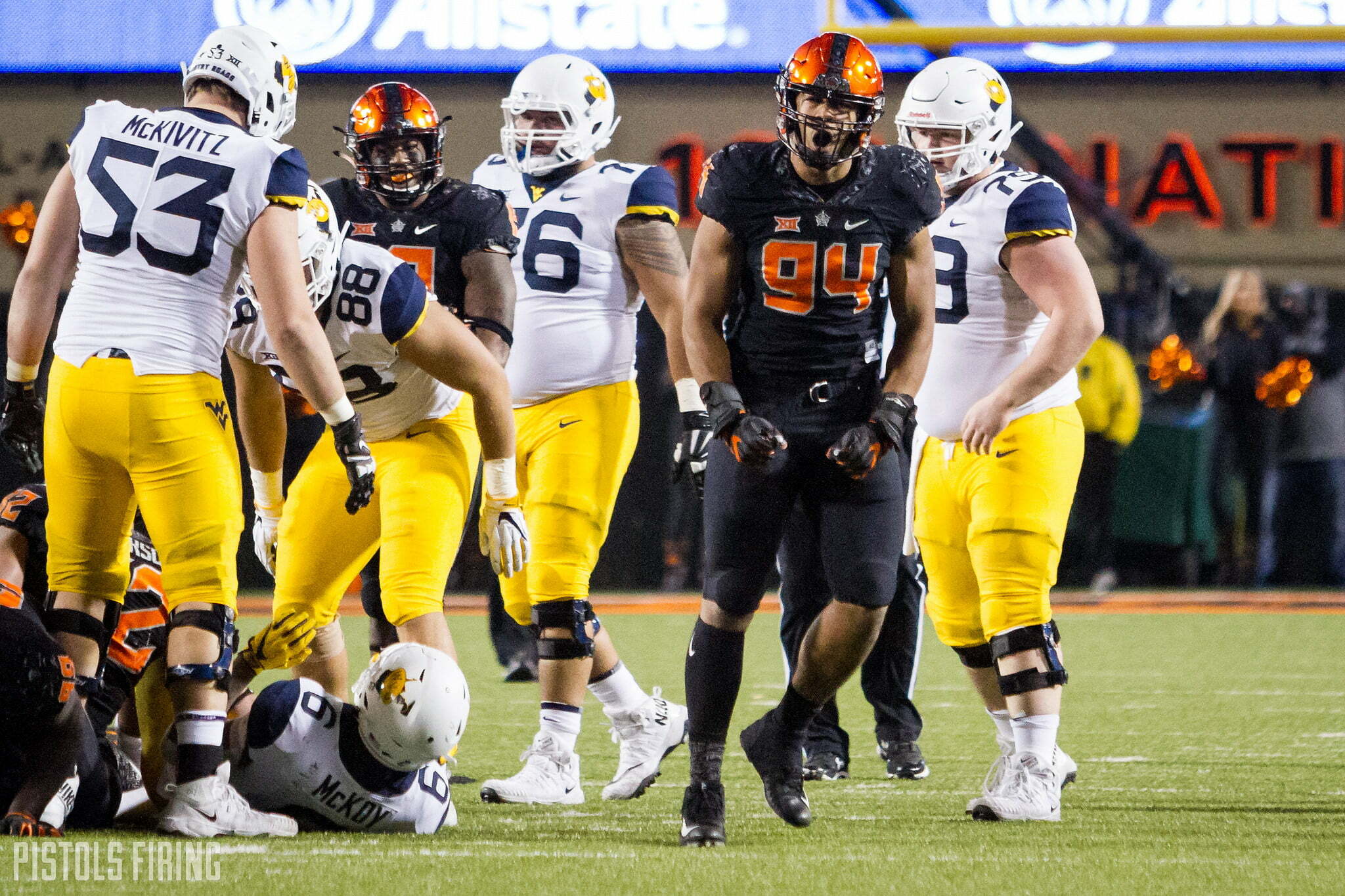 Next up in the recruiting reset series, I take a look at what the future looks like at the defensive end position for Oklahoma State.

Oklahoma State loses Cole Walterscheid, Jarrell Owens and Jordan Brailford, who have combined for 92 tackles, 30.5 tackles for loss and 18 sacks this season. This is a lot of lost production to make up for in 2019.

Brailford was one of the best all around players on OSU’s defense this year. He displayed his versatility lining up on the line of scrimmage and in the second level as a linebacker. His incredible quickness, finesse and strength caused offenses to pay extra attention to him on every snap. And, even they knew he was coming, he still was able to get to the quarterback time and time again this season.

Along with Brailford, Owens is another significant loss on this Cowboy defensive line. The Palestine, Texas native was a very explosive pass rusher and caused a lot of havoc in the backfield this season. He really seemed to benefit from Jim Knowles’ scheme as it really showcased his athleticism and overall speed.

Cole Walterschied is another departure which can’t be overlooked. He has had a solid career at Oklahoma State and showed off his size and strength on his way to 15 tackles for loss and 5 sacks over the space of three seasons of playing time.

To make up for this production, guys are going to step up into the spotlight who have either been rotation players, or haven’t seen much of the field at all. Mike Scott and Brock Martin are two guys who have shown flashes at times this season.

Scott has seen playing time in 10 games so far this year. The junior college transfer showed he’s very capable of getting to the quarterback, recording 3 sacks, including the one below against Texas Tech.

In addition, Brock Martin, the former high school all-state wrestler, has recorded 5 tackles this season and looks to be ready for an increased workload.

Outside of these two, former three-star recruits Braden Cassity and Tyler Lacy will look to crack the rotation. I think Lacy has the potential to be a stud, he has great length and apparently he’s been bulking up in the weight room. This combination of size and strength could be huge for the Pokes next season.

The Cowboys signed three defensive ends on Wednesday at the start of the early signing period for the 2019 recruiting cycle: Kody Walterschied, Isreal Isuman-Hundley and Trace Ford. I’ll discuss each of these recruits in more detail below.

Kody Walterschied, the younger brother of Cole, did everything at Muenster High School. He played on both the offensive and defensive lines, the basketball team and threw the shot put and discus in track and field.

At 6-6, he’s got the size that his brother has, but looks to be more athletic. The three-star prospect will need a little time to develop and put on a little weight, so I don’t expect him to make an impact next season. However, with his height and frame, he has the potential to be a force off the edge for the Cowboys.

Isuman-Hundley is another project-type recruit like Walterscheid. He hasn’t been playing football for very long, and he still has a lot to learn. The Nigerian native is very raw and doesn’t possess much technique to get by offensive lineman, however he uses his insane speed, strength and overall athleticism to make plays. He lined up on both the strong and weakside in high school, and even though he’s still learning, it’s a good sign that he has this kind of versatility.

The young defensive end has the frame to add weight and if he can, that, along with his quick first step and agility, will be a huge problem for opposing offensive linemen. For someone who didn’t grow up playing football, he is a solid tackler and does well stopping the run. He’s a very exciting prospect and I look forward to watching him grow in Stillwater.

Trace Ford is one of my personal favorite players in this recruiting class. Ford is a freak athlete and he displayed this athleticism for the basketball, baseball and football teams at Edmond Santa Fe. Ford finished his senior season with 51 total tackles, including 13 tackles for loss and 3 sacks, 6 passes defended, 1 forced fumble and 1 fumble recovery over an 11 game span. Additionally, he recorded 18 receptions for 289 yards and 4 touchdowns on the offensive side of the ball.

Ford has an incredibly quick first step and amazing overall speed, running a 4.69 40-yard dash per ESPN. He puts his speed on display in the following clip.

Ford will most likely need to add some weight to his 227-pound frame when he gets on campus, and he might not be a guy who makes an impact right away. However, I think he will turn out to be one of the best prospects of the 2019 recruiting class.

The Cowboys are still hoping to land one more defensive end in this class. After missing out on LaRon Stokes, they have their sights set on junior college product Soni Fonua.

Fonua has the experience and skill to crack the rotation right away, but there are several other schools in the mix, as Kyle Boone covered a few days ago. He would be a great piece to add along with the three incoming freshmen mentioned above.