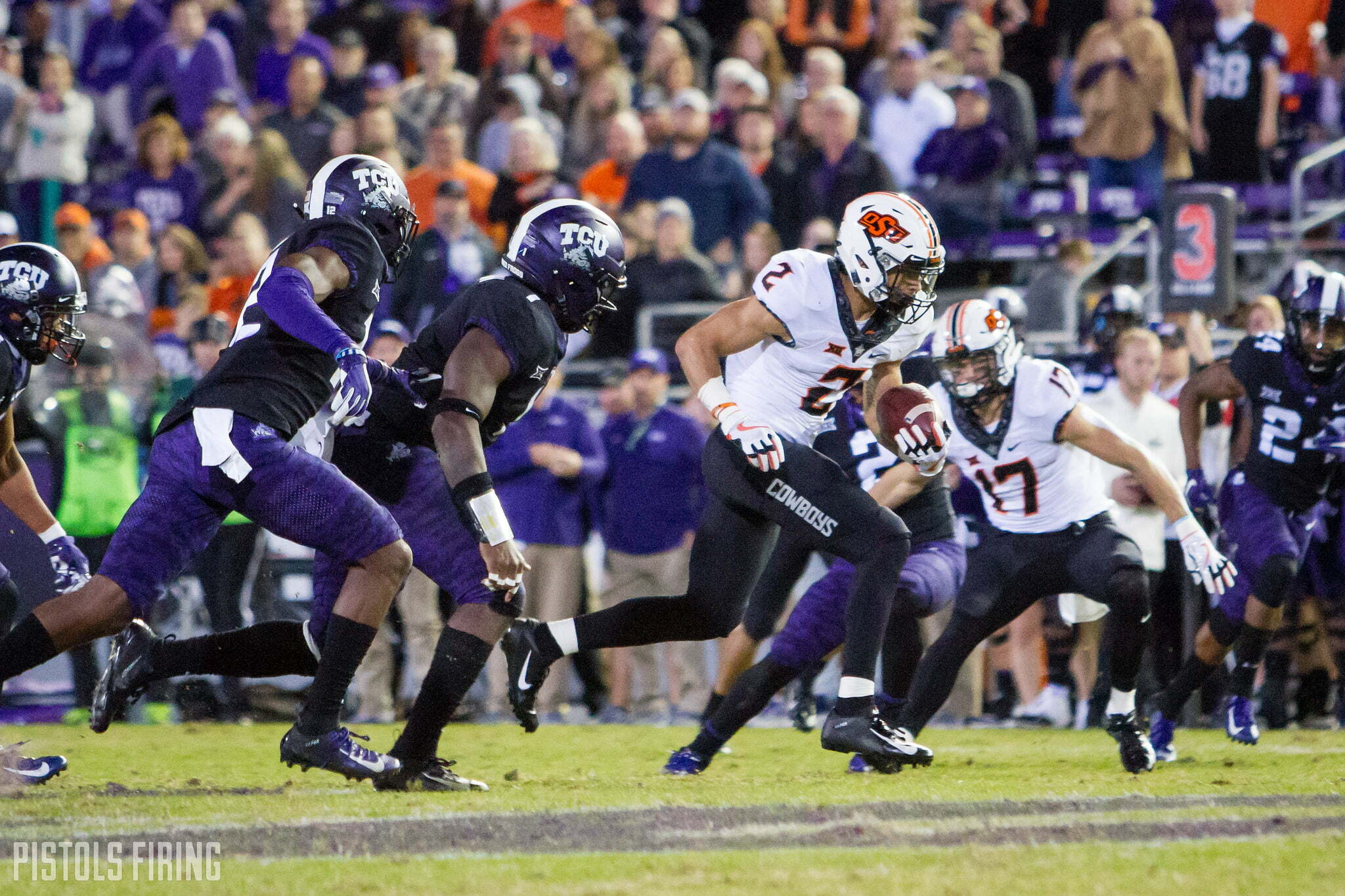 Wide receiver will be one of the most talented position groups on this Oklahoma State roster as we look ahead to 2019. They return all their production from 2018 outside of one transfer, along with a bunch of young talent, and added a highly skilled recruit to round out this unit. I’ll dive into this in more detail below.

The previous recruiting reset series posts can be found here:

McCleskey announced after the Texas Tech game that he would be redshirting for the remainder of 2018 and transferring at season’s end. The former three-star recruit finished his Cowboy career with 1,865 receiving yards on 167 catches and 17 touchdowns.

When you a returning wide receivers like this guy.

You should already feel overly positive about this position in 2019. Tylan Wallace and Tyron Johnson, both shown in the clips above, combined for 2,102 receiving yards on 125 receptions and 16 touchdowns. Wallace’s name can be found on nearly every award list from this season and should be on every preseason award watch list next year. While Johnson, a former five-star recruit, has the explosiveness to bust a big play almost every time he touches the football. These two will be one of the best wide receiver duos in the nation heading into next season and they rightfully deserve all of the hype they get.

If that doesn’t have you feeling great about the Oklahoma State wide receiver unit in 2019, then maybe I should mention that they return everyone on the roster, outside of McCleskey, and have several talented youngsters who we didn’t even get to see this season due to injuries and redshirts.

Inside receivers Dillon Stoner, who will also line up on the outside at times, and Landon Wolf both return after compiling a combined 890 yards and 3 touchdowns so far in 2018. Not to mention speedster Braydon Johnson, who showed some flashes of his talents this season.

Along with his blazing speed, Johnson showed his versatility as he had been originally slotted as an outside receiver, but was asked to step inside when Stoner went down with an injury. His play in limited action has me excited about his potential moving forward, not to mention the rumors that he would give track star Chuba Hubbard a run for his money if the two were to race.

Outside of Johnson, other young receivers like C.J. Moore, Jonathan Shepherd, Patrick McKaufman and L.C. Greenwood are all looking to showcase their skills in 2019. Moore, a four-star recruit out of Tulsa Union, is a very exciting talent on this Cowboy roster. He’s incredibly fast and explosive for someone standing 6-5, as you can see in the following video.

It would be nice if he could add a little weight to his 175-pound frame, although he’s definitely not lacking much strength.

In addition to Moore, Jonathan Shepherd is another taller receiver at 6-4 would could make an impact next season. The Kilgore, Texas native doesn’t possess the overall quickness of Moore, but he still has great speed and deep threat ability.

Two other players to watch are Greenwood, who was listed behind Tyron Johnson on the week one depth chart before missing time due to injury, and Patrick McKaufman, a 6-6 JUCO transfer who was expected to see a decent amount of playing time before he went down with an ACL injury.

Lastly, Tylan’s brother Tracin Wallace is trying to return from an injury to the same knee he had injured twice before. Wallace was listed as Dillon Stoner’s backup on the Week 1 depth chart before suffering the injury.

The Cowboys currently have one wide receiver signee in the 2019 class, four-star Langston Anderson.

The Midlothian, Texas product was a late commit/signee for the Cowboys this past Wednesday. It came down to Baylor, Oklahoma State and Ole Miss for the young wideout, but in the end he decided Stillwater was the appropriate landing spot.

Anderson finished his senior season with 1,291 yards on 72 receptions and 18 touchdowns. In addition, he had 19 rushing attempts for 164 yards. Along with these impressive stats, he also has really impressive testing results according to ESPN.

Anderson was clocked at a 4.57 40-yard dash and 4.25 in the 20-yard shuttle and also recorded an insane 39.5-inch vertical jump. You can see where his testing results compared to other high school wide receivers in the graphic below. 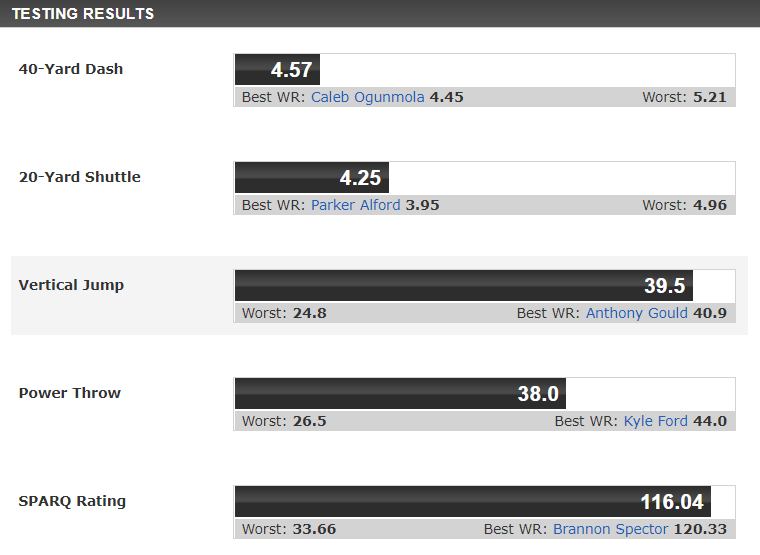 One of the first things that caught my eye when watching film on Anderson was this touchdown reception shown in the following video.

Not only does he display his agility, speed and strength all in one play, but he also wears number 88 and throws up the “X” after the touchdown. I talked about this on the Reload Podcast with Kyle Boone, but this specific play has me all aboard the Langston Anderson hype train and I don’t think anyone can convince me he’s not going to be an absolute stud for OSU.

In addition, Anderson has great hands and does a great job of using his size, at 6-2, 195-pounds, and leaping ability to make contested catches over defensive backs.

There aren’t very many areas where the young wide receiver is lacking, however as 247Sports Gabe Brooks points out, he could improve on his “dart-and-dodge” ability.

“While he tests well laterally, Anderson is a bit stiff through the hips and can improve his fluidity. His short- and screen-game effectiveness at this point in his development is largely attributed to his strength and straight-line explosion. If he adds consistent dart-and-dodge ability, watch out. Anderson is an outstanding pickup for Oklahoma State and owns physical traits that could get him on the field early.” [247Sports]

I don’t think the Cowboys will look to grab another receiver with their remaining three spots in the 2019 class, so it looks like Anderson will be the lone signee at this position. Four-star Demariyon Houston, who was heavily recruited by the Pokes, recently decommitted from Texas, but after a recent official visit to Minnesota and an offer from Penn State, I don’t see him ending up in Stillwater.